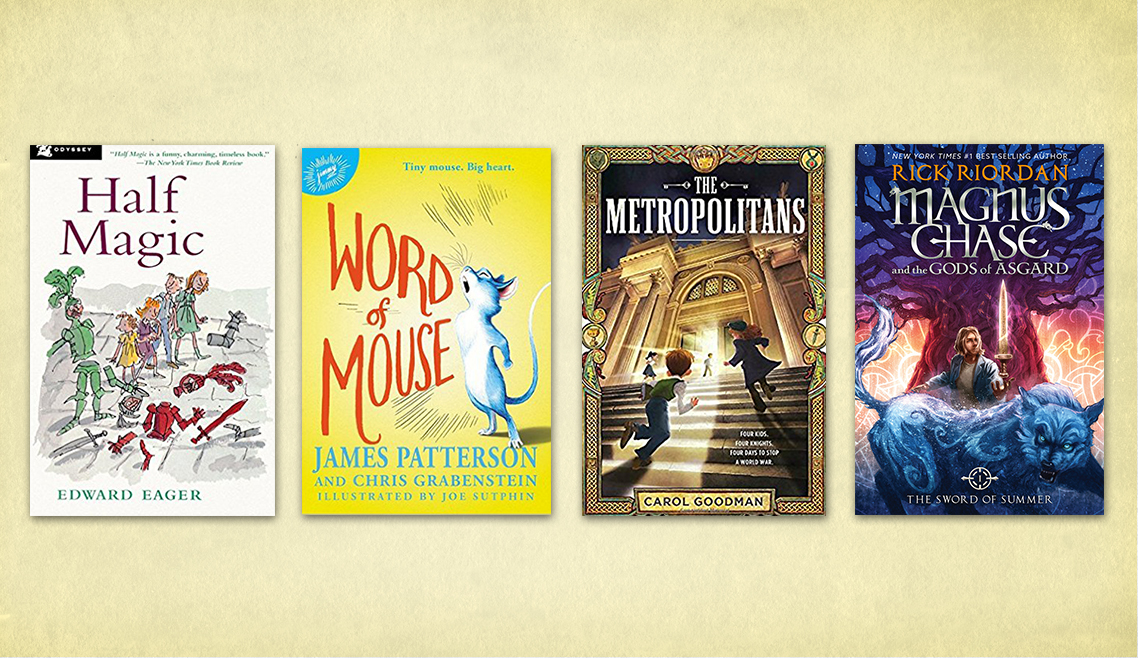 You know that feeling when you’re reading a book you can’t put down? When kids find a book like that, it can turn them into lifelong readers. And with reading levels steadily declining — and many kids checking their phones into the wee hours — it may not be such a bad thing if reading keeps them up past their bedtimes.

We’ve compiled a list of books for kids and teens that will have them on the edge of their seats, headed for a cliffhanger or a satisfying conclusion after many exciting twists and turns. From a beloved classic to recently published best-sellers, these are guaranteed to grab young readers and not let go.

Half-Magic: Tales of Magic, by Edward Eager, age 7+. Four siblings find a magic charm that grants half of what they wish for. Sometimes carefully, and sometimes recklessly, they find themselves transported on adventures both thrilling and terrifying — in a Middle Eastern desert, among King Arthur’s knights, and in their own neighborhood. This series feels fresh and funny, even though it was first published in 1954.

Word of Mouse, by James Patterson and Chris Grabenstein, age 8+. A tiny blue mouse with unusual powers (such as reading) escapes from a research lab, determined to save his still-imprisoned family from awful fates. The fast-moving plot and highly relatable characters (both human and mouse, dealing with issues ranging from social anxiety and gender stereotypes to life-and-death danger) are irresistible.

Who Could That Be at This Hour?: All the Wrong Questions, by Lemony Snicket, age 9+. The mysterious adult narrator of A Series of Unfortunate Events is a 12-year-old apprentice crime solver in this start to a four-volume noir mystery series. It’s full of Snicket’s trademark wordplay, literary references, and memorable characters, including an evil, elusive villain.

The Metropolitans, by Carol Goodman, age 10+. As the bombing of Pearl Harbor takes place half a world away, four 13-year-olds converge on the Metropolitan Museum of Art in New York. Soon they’re swept up in the struggle to decode a secret message and foil a Nazi plot (possibly aided by magical forces) to poison the city’s population. It’s a thrilling adventure full of relatable issues, appealing heroes, and deadly peril.

The Sword of Summer: Magnus Chase and the Gods of Asgard, by Rick Riordan, age 10+. In this Norse mythology series start by the author of the popular Percy Jackson series, Magnus must stop the end of the world (Ragnarok in Norse myth). He dies at the beginning and is brought to the warrior paradise, Valhalla, where the adventure continues. Riordan sticks to his signature humor in the face of dire circumstances, so nothing gets too dark.

Under a Painted Sky, by Stacey Lee, age 12+. Two girls — one accused of murder and the other a runaway slave — disguise themselves as boys and join up with three young cowboys heading west to California on the Oregon Trail in 1849. This exciting, richly detailed adventure deftly blends in serious social issues like slavery, discrimination, and gender bias. The multicultural cast of characters lends authenticity to a story about settling the West.

The Diabolic, by S.J. Kincaid, age 14+. Questions of nature vs. nurture play out in unexpected and entertaining ways in this stand-alone sci-fi tale of a genetically engineered female killing machine who grows a heart. Given the compelling plot and memorable main character, fans of high-impact galactic intrigue will eat it up.

An Ember in the Ashes, by Sabaa Tahir, age 14+. Two characters are out to overthrow the Martial Empire, an alternate universe with a strict caste system in this dual-narrative fantasy: Laia, a Scholar (the oppressed class) whose brother has been arrested for treason, and Elias, a soldier in the Empire’s elite military academy. Adding to the complications: not a love triangle but a square, with four smitten young people.

Six of Crows, by Leigh Bardugo, age 14+. Six young outcasts are commissioned to pull off the greatest heist ever in this spin-off of the Grisha trilogy. It’s equal parts nail-biting Mission: Impossible-st‌yle excitement and intimate, compelling portraits of flawed and complex characters. Add to that two star-crossed love stories and the pages turn even faster.

The Sun Is Also a Star, by Nicola Yoon, age 14+. This touching love story about two teens who fall for each other during 12 intense hours together in New York City is a beautifully written, unforgettable romance. It follows Jamaican-American Natasha, who’s all science and logic, and Korean-American Daniel, a philosophical dreamer, from the moment they meet on a crowded street to them changing each other’s lives.

Common Sense Media is an independent nonprofit organization offering unbiased ratings and trusted advice to help families make smart media and technology choices. Check out our ratings and recommendations at www.commonsense.org.
MORE FROM Common Sense:
9 Ways to Get Teens Reading, Summer Reading List for Kids of All Ages, 5 Ways to Get Kids Hooked on Books
Red Tricycle > Spoke Contributor Network > 10 Page-Turners That Will Keep Your Kids Up Past Bedtime (In a Good Way)