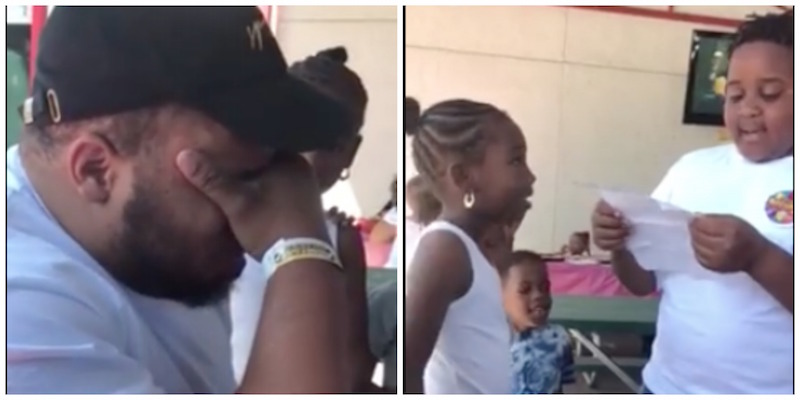 Birthdays are always a special occasion for families, but one young boy decided to make his day extra special by popping the question to his stepdad at his party. No, not that question. The heart-melting proposal Kalani Watson made to his mom’s husband was to ask if he would officially adopt him as his son. Grab some tissues and check out the video below to see if his birthday wish came true.

As the video shows, Kalani decided that his birthday party would be the perfect time to read his stepdad, Brandon Williamson, a tear-inducing letter. “Dad, I know today is supposed to be all about me, but today is really about us,” Kalani read out loud as his family and friends listened on. He retold stories of their relationship together, pausing only to ask Brandon if he thought he could live without him and his mother. Brandon, of course, replied no.

“So let’s stop playing and make it official.” Kalani continued. “Brandon Craig Williamson, will you do me the biggest favor in the world? Will you adopt me?” Brandon then opened the box Kalani handed him and found a blank adoption application letter inside.

Kalani had been planning the surprise with his mother for two months and had originally planned to pop the question on Father’s Day, but he just couldn’t wait. “I was thinking, ‘I earned this,’” Brandon told the Huffington Post. “Most parents automatically get their child’s love. I had to grind for this, I had to show him I’m not going anywhere. So since I have had to work hard for his love I don’t take it for granted. So it was a honor and one of the greatest moments of my life.” Clearly the this thoughtful father and son are a perfect match.

What special gestures has your family shared to solidify your bond? Share your experiences in the comments.