It seems as if licensed characters dominate the toy universe these days, leaving little room for upstarts or creativity outside of known gameplay or familiar movie story lines. We went to New York City last week to walk the never-ending hallways of Toy Fair to look for the most clever new places the familiar faces will be showing up in 2013. Because while we may never escape the barrage of licensed toys, we can at least get excited about old favorites showing up in interesting new ways! Here are some of the best new toys emerging from NYC Toy Fair 2013 that will feature the coolest characters we already know and love.

Skylanders Monopoly
When Activision launched its original Skylanders Spyro’s Adventure video game property in the fall of 2011, there was no ancillary licensed merchandise to pair with what ended up being one of the most successful game launches ever. By the time the sequel, Skylanders Giants, flooded store shelves a year later, there were plush toys, t-shirts, bedding, a construction toy deal with MEGA Bloks, backpacks and more bearing the images of Skylanders characters. And now, in 2013, USAopoly will bring Stealth Elf, Hot Head, Kaos and more of your favorite Skylanders to the famous square Monopoly world! Despicable Me 2 Viewfinder 3D
The surefire hit Despicable Me sequel will take over the multiplex this summer, and a sweet suite of new movie-related toys will start hitting toy store shelves in May. In addition to action figures and a special edition of Operation featuring the minion Stuart, Despicable Me 2 has partnered with Fisher Price to produce a custom minion Viewfinder that is larger and brighter than previous models, and displays scenes from the film in 3D! My Little Pony Comics
Little girls still adore them, but now tweens and even grown men (known as Bronies) are getting hip to Rainbow Dash & friends. Hasbro is wasting no time in filling our homes with clothes, jewelry, pony hair extensions, and, most excitedly, comic books for their popular My Little Pony franchise. Tetris Bop It!
It is everything you love about Bop It! — the fast-paced action, the non-stop bopping — combined with the shape strategy of Tetris. It is also super challenging in a way that traditional Tetris is not, because while you are in a rush you rarely are in a panic. And this panic is precisely what Tetris Bop It! invokes as the player slides the unit from side to side and bop the Tetris pieces in place on the LCD screen. Available in late summer, from Hasbro. LEGO Batman Game
The ever-growing line of LEGO construction board games will provide fans of the Dark Knight the chance to build and play with Robin, the Joker, Riddler, and Batman himself in what will surely be one of the hottest new LEGO items this year. Available in the fall, from LEGO. Peavey Marvel Superhero Instruments
Superheroes are huge right now, and guitarists, well, they are eternally cool, which is why Peavey’s new lineup of Marvel and DC comic hero electric and acoustic guitars is such a brilliant mash-up. The company will also launch axes featuring characters from The Walking Dead this year, if zombies are your thing!

Bejeweled – The Board Game
Whether you’re addicted to the newer Sugar Crush app or the classic game of Bejeweled on your handheld device, this real life version of the popular puzzle game will allow us all to put our phones down for a minute or two, and play a favorite game with family and friends.  Available in the spring, from Hasbro. The Game of Making Bacon
And finally, maybe the most pop culture relevant new game at Toy Fair was a simple dice game dedicated to seemingly everyone’s favorite food in the 21st century, bacon! This novelty game will have bacon showing up in brand new places, and will become available later this year. It looks like 2013 is going to be a fun year for toys, which of these toys do you think would be a hit with your kids? 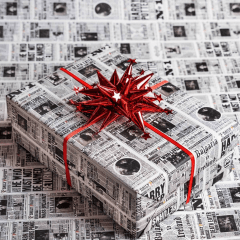