30 Parents Describe Their Most #AwkwardMoments

Parenting comes with a lot of awesome perks, but totally embarrassing moments may not be one of them. We asked our twitter community to divulge some of their most awkward moments and the answers will make your day.

What’s the funniest thing you’ve done out of sleep deprivation?

Started to sing my sentences instead of talking! I was so tired! —@Forever30ishMum

I got into the shower with my socks on. —@Justin_Adler

One night I filled the dog bowl with milk and baby’s bottle with ice water. New mom problems. —@mrspthomas23

Have your kids ever innocently said something rude to a stranger or family member?

My son told my Father-in-Law that his wife is crazy! Obviously, he knows we have said that! —@Forever30ishMum

(My son) asked his Grandpa what it was like to come here in a covered wagon. —@TommiesMommy14

They told Grandma she needed a salad, not a burger, at dinner. —@meowpar85

My son whistling at ladies and telling them how pretty they were from the back seat at age 5. —@Soon2Bfamilyof4

My son once told the man in front of us at the store that he smelled. He did, but still… —@SHARONPLUS4

Have your kids ever “outed” you in public for swearing, going to the bathroom, etc?

The famous “Are you Pooping?” in the public restroom. —@djc319

My daughter publicly announced that I changed my “diaper” (aka maxipad) to the family at a restaurant. —@meowpar85

Also while in the restroom my daughter loudly said, “eww that stinks so bad” when someone else passed gas. —@meowpar85

On the way to soccer, I gassed. When we pulled up, kids jumped out & yelled, “ew mom farted!” —@mrspthomas23

Have you witnessed someone ELSE’s Awkward Family Moment?

This kid at the playground told me his mom likes to sleep on top of daddy. —@justints21

I witnessed a little boy pull his pants down and pee in the middle of a store once. —@SquashieDipity

I once heard a little girl ask her mom in a loud voice where babies come from. —@JUDYEPSTEIN1

We were at the store and I saw a cute baby. He looked at my husband and said Dadda! —@latinamama2be

Like when [a friend’s] child asks why you didn’t come to the party/BBQ? Ummmm… I wasn’t invited. —@Summrluver

School can be hilariously awkward. What’s your most awkward school/PTA/teacher moment?

When we were late for school, my son told his teacher..My mom had the runs! Lol! —@mom321

Going to a parent teacher conference and finding out my son misbehaves 100% of the time! —@latinamama2be

I told the teacher that I didn’t know they had an event, and my daughter said, “I told you 100 times mommy!” —@MariAuriazulD

I helped with a Halloween party, and I took my daughter’s hand, but it ended up NOT MY daughter! —@kittylover1313

I forgot it was PTA meeting night and went after 1/2 a bottle of wine– Best meeting yet! LOL. —@TommiesMommy14

What’s the most embarrassing thing your kids have told others about you or your partner?

My niece told her mom MY favorite coffee was whiskey! —@Chandlermom221

When my son said I wear a ‘half of a diaper’ in my underwear, I almost died! —@HollyGuski

“My mom can’t cook anything but ramen noodles” —@missperfectx13 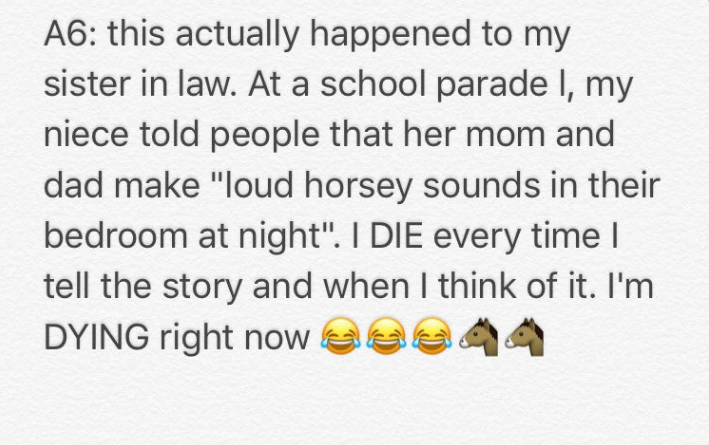 If someone were to write a TV show about your family, would it a comedy? Drama? Horror?

It would be a comedy because my family always says off the wall stuff! — @cocoprincess805

It would be a dramedy with a few horror scenes (more than I’d care to admit). — @LoriLeal1

DRAMA for sure! Every day someone is having issues! —@kittylover1313

And for our last question…when was the last time you felt like your life was in pieces?

This morning when I tried to jump out of bed but had to crawl out instead. —@J__Zack

Yesterday. My dog decided he wanted to give the mailman some extra love. —@momochompers

This morning my daughter was sick, and my son wanted to be in his underwear for school. —@latinamama2be

Yesterday in WalMart! I literally had to drag my son outta the store! —@april_moore_20

Just last night. My son went to the playground and brought back a dead frog for me. —@justints21