5 Parents Who Have Mastered the Art of Parenting 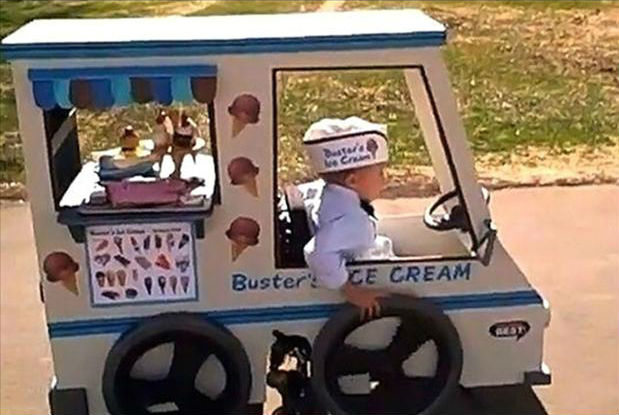 You signed up for the hardest job on the planet when you became a parent. Some days, the task might seem insurmountable, but you can take some encouragement from the following parents who have mastered the art of parenting.

If your child has a disability, normal things like Halloween costumes take on a whole new level of difficulty. Some parents use half-baked ideas to avoid figuring out complicated logistics. Not these parents. They designed an entire realistic-looking ice cream truck to fit around their son’s wheelchair. Let’s take the bet that he won the neighborhood costume contest that year.

Nobody likes it when siblings squabble. One mother decided to up her creativity in her quest to calm the stormy waters of sibling rivalry. She made her two kids wear one extra-large shirt. If you’re trying to picture that, yes, that means they essentially become conjoined by cloth with the use of only one hand until she sets them free. They had to rely on each other to get anything done. Their faces tell the story of their misery, but they’ll learn to not let Mom catch them fighting in the future.

Sometimes your kid goes through a rebellious phase, wearing clothing you don’t approve of and refusing to listen to reason. This dad found a creative way to let his daughter see how it feels when you’re forced to be seen with someone whose shorts are uncomfortably short. Not content to only show her what that looks from the safety of their home, he took the kids to Wal-Mart in his short shorts. He then wrote a message on his back asking others to ask his daughter if she still thinks short shorts are cute. Maybe next time, she’ll opt for the chaste shorts.

We know that kids can’t always get their way. Even so, sometimes a parent needs a boatload of credit for honoring some unique, innocent requests from kids at the expense of a bit of parental dignity. Take this dad. His daughter wanted a Little Red Riding Hood-themed Halloween costume only she wanted to be the wolf. Guess how Dad decided to dress. Lesser parents might not have been up for the challenge, but this dad owned it.

Kids run around the house, creating all kinds of chaos. Sometimes, they need to stay still and remain quiet for everyone’s peace of mind. These dads find unique ways to accomplish this. On hot summer days, the kids want to head to the nearest lake or swimming pool. If that’s not an option, you can always take lessons from this dad — find a raft and a hose and drag them around the front yard! They’ll stay cool and wear themselves out.

Maybe you’re not as lost as you think you are as a parent. Everyone’s struggling to get it right. Think of what you’ve done to master parenting. You might already be a parent other parents can look up to.

Tyler Jacobson is a happy husband, father of three, writer and outreach specialist with experience with organizations that help troubled teens and parents. His areas of focus include: parenting, social media, addiction, mental illness, and issues facing teenagers today.
MORE FROM Tyler:
Writing By Tyler Jacobson, Help Your Teen Now
Red Tricycle > Spoke Contributor Network > 5 Parents Who Have Mastered the Art of Parenting