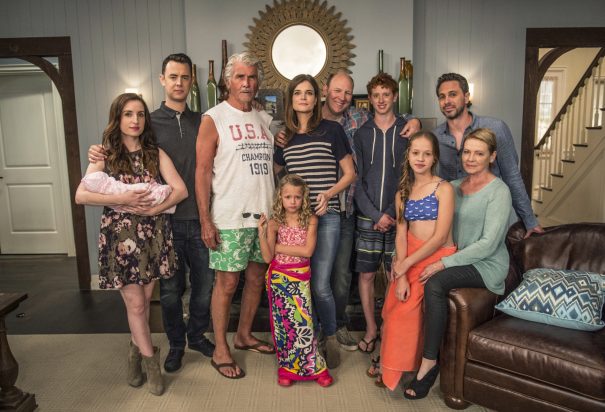 Sometimes there are TV shows that come along that just get you. Maybe for you it was My So-Called Life in the 90s or Friends at the turn of the century. Now that you’re a parent, finding relatable and realistic shows that are worth watching during the rare moments of kid-free time hasn’t always been easy…until now. Meet Life in Pieces, the comedy that gets you as a parent. Season two of this hit show debuts October 27, 2016 on CBS at 9:30 p.m. and is full of relatable, heart-warming and downright funny moments. Whether you’re a series regular or are tuning in for the first time, here are five reasons season two rocks.

1. It’s Totally Relatable
This show just gets you as a parent. Case in point: last season Greg, the dad played by Colin Hanks, gets pulled over on a late night diaper run. Why? He’s suspected of drunk driving when in fact, he’s simply exhausted from being a new parent. If this sounds totally relatable and oh-so-familiar, get ready for another season packed with moments just like this one. From embarrassing moments to bouts of sleep deprivation to everything in-between, Life in Pieces succeeds at portraying every day situations parents face in a comedic way.

2. And, It’s Actually Believable
Whether you’re a Life in Pieces fanatic or a series newbie, you’ll find the series’ relatable moments actually believable, which isn’t always an easy feat to pull off in Tinseltown. The show’s secret sauce is their writers and actors who have actually experienced a lot of the events portrayed in the show. As the folks at Life in Pieces tell us, it’s their belief that these awkward, funny and endearing moments are also happening to a lot of other families.

3. The Ensemble Cast Is Major
Get ready for a second season that is bursting with new plot lines, characters and funny moments. What makes it all so great (and will hold your attention) is the ensemble cast. Think Colin Hanks, Dianne West, James Brolin, Betsy Brandt and guest starring in the season premiere, Nick Offerman and Megan Mullally.

4. You Need a New Post-Bedtime Fix
If Caillou is driving you batty, it’s time for some adults-only TV post-bedtime. Cozy on up to season two of Life in Pieces sans the kids for a few sweet moments of well deserved you-time. The 30-minute show will have you reliving your first date, that awkward first meeting with your in-laws,  the “birds and bees” talk you wished your parents had done differently (like any other way), the moment you gave birth and more. We’re guessing you deserve some laughter and smiles.

5. Short Stories in a Sitcom? Win!
You’ll dig how the series is set up. It features a series of short stories, each focused on a different character. This all translates to a dynamic sitcom that’s anything but ordinary. It’ll keep your attention no matter how sleep deprived you are, and you’ll fall in love with the array of characters in each short story.

We’re so excited about the season two premiere of Life in Pieces. Catch it Thursday, October 27, 2016 at 9:30 p.m. on CBS and CBS All Access. Have you watched season one? What’s your favorite part of this show?

photo courtesy of Life in Pieces