7 Benefits of a Baby Swim Class You Might Not Know 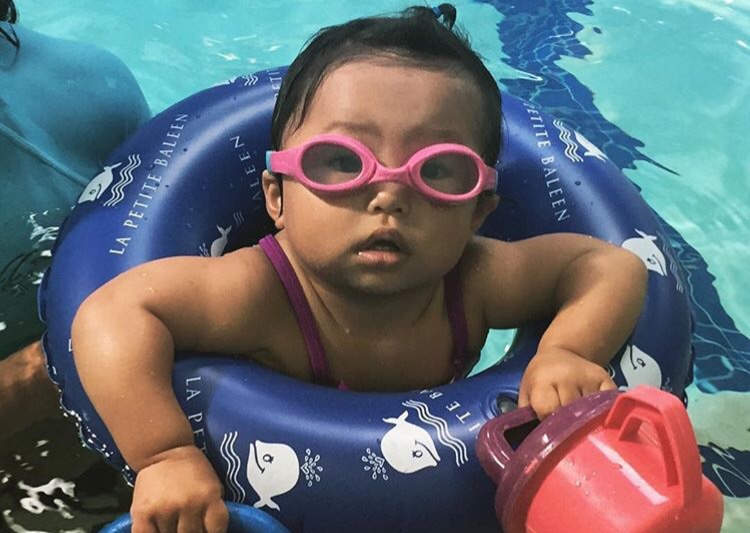 We have been taking Dahlia to swim class for a little more than six months now and I can’t stress how much she’s learned since she’s started going. Classes are 30 minutes and repetitive, but trust me, at this age, their brains are like sponges and you’ll want them to retain what they learn in class.

It became very apparent to me last week that Dahlia was retaining everything from class when she mimicked what we do in class at home and finishing all the songs we sing as well. The classes aren’t cheap, but I know we’re getting our money’s worth. (You can also do a free trial class if you give them a call and sometimes they have free classes specifically for babies under a certain age).

Listed below are the seven benefits of going to a baby/toddler swim class. These benefits are also true for adults too! It’s never too late to start swimming!

1. Safety. This is an obvious one & though we don’t have a pool at home, we do have a bathtub, shower, sink, or maybe a friend does or maybe the hotel does if we go on vacation – you get the picture. Whatever the case may be, water is everywhere!

Drowning is the third leading cause of unintentional death in the world according to the WHO. What better way to protect your child then to practice safety. Safety, by-the-way, is the number one thing stressed in these classes.

2. Building Strength. Doing all the Safety drills gets tiring for a little one and that’s all right by me. Anything to get her to nap and sleep well at night, right?

She’s much stronger. Dahlia can now pull herself out of the pool using her elbows & knees. The best part about it, she actually tells me where her elbows and knees are. In addition to that, she’s developed her leg muscles. She used to not be able to do the running & jumping in the water but now she can and even enjoys it.

3. Building Confidence. Not only do I think the classes help build strength physically, I think it helps build her confidence mentally.

Children are very impressionable at a young age & the more you build them up, the more confidence they will have. Praise is very important in this class & positive vibes only.

4. Overcoming Fears (for the Kids and for the Parents). We were very hesitant at first to take Dahlia to swim classes because we thought she’d be too young, but the face that one of us has to be in the water with her has eased our fears. Not only is she comfortable in the water and submerging herself but we are too! She also used to be scare of having water poured over her head at bathtime, but not anymore.

I’ve asked a lot of parents why they take kids to swim classes and surprisingly, a lot of them tell me that they, themselves, can’t swim so it’s reassuring to know that they are establishing this life skill for their kids.

5. Establishing a Routine. Everyone loves a routine, so what better way to get your baby/toddler started than a class like this one.

Dahlia knows that every Thursday morning, we get into mommy’s car to go to swim school. I can tell she looks forward to it whenever I pack the bag the night before. She also sees the same kids and gets familiar with them as well as her surroundings. After class, we shower & get ready in the locker room and she knows she’ll see the same baby in the class after hers and say, “hi’ to him.

All of this will come in handy when we start getting her into sports or when school begins.

6. Getting them used to Wearing Funny Things. It’s true!  Putting on goggles, fins, and an inner tube can be a bit challenging with a baby/toddler but you’ll reap the benefits later on in life, I am sure.

Also, getting them used to wearing the protective gear means they’ll learn what they are specifically used for. They also look darn cute in these things too!

7.  Lastly, it’s fun! Overall, Dahlia has so much fun in the class and that’s what matters most. She’s making friends, she smiles & sings a long when we sing, gets a kick out of the fun exercises we go through and lastly, she gets to bond with mom or dad individually. What more could a kid want?

I’m glad we started  going to these classes and it also gives us as parents piece of mind to know that she is comfortable in the water. My husband and I both love swimming and hope that she does too! 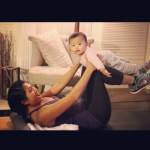 I love to make things, see things, do things + eat things while raising my daughter + 2 Shiba Inu dogs with my husband.  I am a Full-Time Health Professional, Blogger at night & a Full-Time Wife & Mother.  I live in the SF Bay Area & created my blog for my dear daughter, Dahlia.
MORE FROM Joanne:
5 Kid-Friendly & Pet-Friendly in the Bay Area, DIY Monthly Chalkboard for Baby, More on Joanne's Blog
Red Tricycle > Parenting > Mom Hacks > 7 Benefits of a Baby Swim Class You Might Not Know