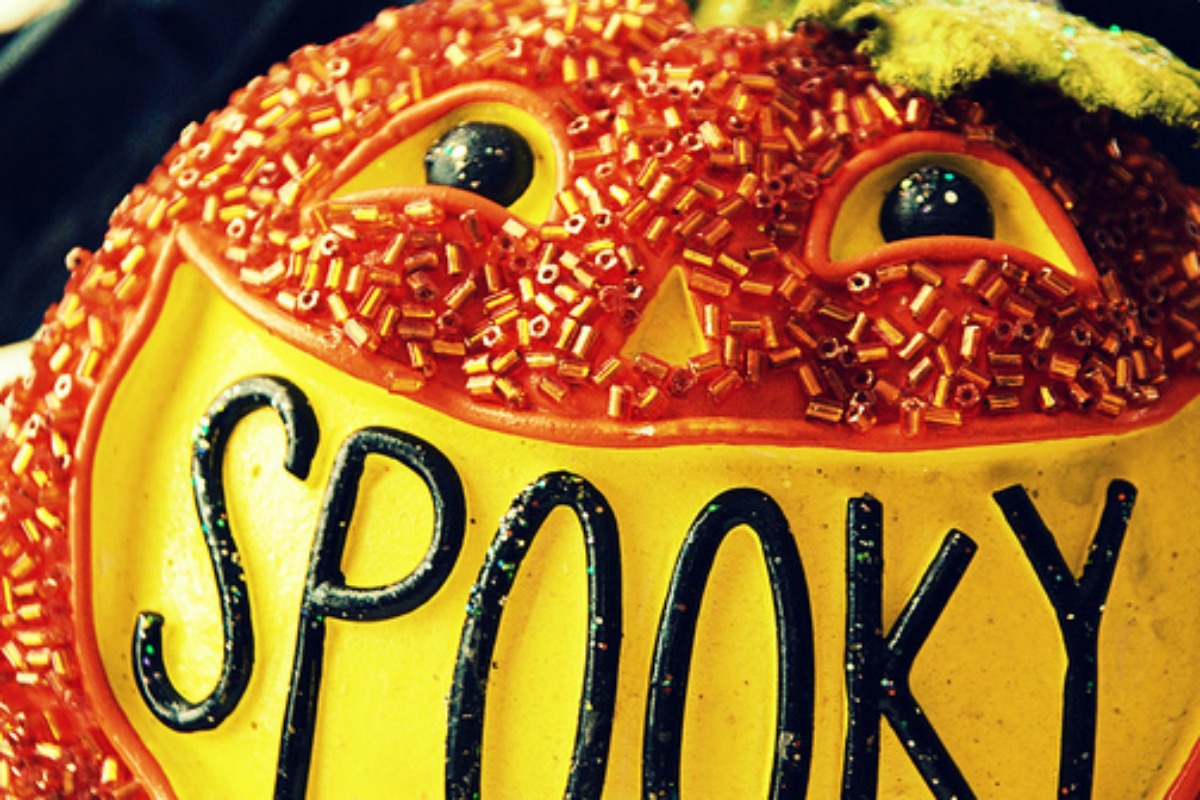 If you’re like me, you’re probably thinking that bedtime at your house is hard enough as it is, without the added complication of giving your child nightmares, so you’re avoiding most of this season’s activities, and feeling a little bummed you haven’t done anything that’s categorically “Halloween” this year.

If that’s the case, I have a little something for you. I’ve come up with a few ideas that have walked the line of spooky, without crossing into scary territory. These are things that seem to be perfectly suited to the types of adventures my two year old daughter loves to have, but can be enjoyed without making bedtime difficult. (OK, well at least not more difficult than it already is.)

As with anything else, your personal understanding of your child is the best indicator of whether or not they’ll enjoy an activity, so use the Spidey Senses you were given when you became a parent before deciding whether or not these are right for your little ones.

Find a spot that’s a little out of the ordinary (under the covers, in a closet, or even outside), grab a lantern, and read a book in the dark. Our favorite spooky-not-scary book is, “The Great Monster Hunt” by Norbert Landa. What begins as an innocuous noise coming from under Duck’s bed continues to get embellished by her forest friends, until they claim they’re hearing all sorts of spooky sounds. The crew arms themselves with nets, traps, and “monster buster sticks” before working up the nerve to peek under Duck’s bed. What they find isn’t scary, or even spooky, for that matter. In fact, it’s very sweet.

2. Creepy in the Kitchen

I thought about doing the old “spaghetti brains” Halloween party stand-by as a fun sensory experience with my toddler this year, until I realized that, when you have a two-year old, everything requires a concrete explanation, and brains in a bowl was not one that I was eager to have. I decided to save that until she’s a bit older, and modified the idea to be a bit more pre-k friendly. I created a recipe for Witch’s Brew that combines food and fun in the spirit of “spaghetti brains”, but it has the added benefit of being edible when you’re finished:

Blend Together and Enjoy:

6 Toadstools (Strawberries with their caps removed)

*Swamp slop is considered a delicacy in the Land of the Trolls. In its standard form, trolls eat it as part of a balanced breakfast, and they enjoy it in its frozen form during their annual Troll Jubilee. Optional: Add 1-2 drops of food dye to alter the yogurt’s color.

The preschool-aged children in my old classroom LOVED this short video on YouTube: Going on a Lion Hunt. I’m sure you’re familiar with the hand motions and chorus, so you can easily make it an interactive adventure. Even though the spookiest part simply shows a black screen with cartoon eyes peeking out, I always had to preface the video with a reminder to the class that anyone who felt a little too spooked could come sit next to me on the rug. (There were always one or two.) But that never stopped them from shouting for an encore. Seriously, I have no idea why, but this has remained a huge hit for years.

Sit your kids down at a table with:

Glue (lots and lots of glue)

…and let them go to town creating a monster.

I love this activity because it touches on so many crucial points of a child’s healthy development: Fine motor practice, tactile/sensory experience, use of imagination, and it’s an open-ended art opportunity that doesn’t have the usual constraints of a craft project with a definitive end in mind.

When they’re all done, you absolutely must check out a video on YouTube from The Winnie the Pooh Movie (2012). It’s my all-time favorite Winnie the Pooh song, and it’s perfect for this time of year! It shows Pooh and the gang using their imagination to create a monster called The Backson. They not only detail his physical characteristics in a way that’s reminiscent of Shel Silverstein:

In its nose a ring of gold

It smells of monkey’s feet and mould

Its toes are black

Its fur is blue

I swear that all I tell you is not made up

… but they also attribute everyday nuisances as being the works of The Backson:

They spoil the milk,

They stop all the clocks;

They use their horns

To put holes in your socks

The video is colorful, clever, and so catchy that I regularly break into the chorus. Best part: it’s guaranteed to inspire your child to think up what types of trouble her monster creates, blending one artform (collage) into another (storytelling.)

This idea was inspired by my daughter, who has the uncanny ability to look at something harmless and pretend it’s something altogether different (and usually a little bit spooky), like when she told me the campfire pit in our backyard was a bear cave, and proceeded to tiptoe around it, peer into it, and run away from it in a fit of shrieks and giggles.

If your backyard is piled high with wet, fallen leaves, deem it “The Swamp” and have some fun raking paths through it, creating a monster’s lair (leaf pile), and taking turns pretending to be the Swamp Monster.

6. Play Hide and Seek with Your Children

Seem too simple to be spooky? Think of it this way- it’s basically what happens in a haunted house, except without the terrifying rumble of a chainsaw coming from behind you. One party hides, while the other meanders around hoping nothing pops out and scares them. See what I mean?

Older children will like adding the element of  “Home Base” to the game where, after they’ve been found, The Hider has to dart past The Seeker and reach the base, while the Seeker chases after them.

If you’ve decided it’s not too scary to play after dark, you might also try incorporating flashlights or glow sticks into the game. (Expert tip: “Hide” your glow stick or flashlight in a conspicuous place, and wait nearby. When the Seeker thinks they’re about to nab you near the place you left your light, you can sneak up behind and spook them.)

Pretty much the moment you enter a corn maze you’ve become lost, since the whole idea is that you have to find your way out by trial and error, but you know what I mean. Much like anything else, when it comes to young kids, keeping them engaged is as simple as introducing the situation you’re in as part of a story and getting them involved.

Tell them you’ve gone on a journey into the field, but now you’re mixed up and don’t know how to get out. (Again, the very definition of a corn maze, but stay with me here.) Encourage them to look for clues that lead to the exit, like finding footprints of other visitors or broken corn stalks. (You’ll be surprised by what they find or, moreover, what they deduce from their findings.)

Have a member of your troop go up ahead and give a signal if they’ve reached a dead end, and a different signal if they want the rest of the group to follow them. (Ex: One long whistle means “Dead End”, three short whistles means “Follow me!”) Consider dropping kernels of dried corn in the st‌yle of Hansel and Gretel, show them how to determine the direction you’re walking using the time of day and position of the sun, or, if you’re really desperate, send the littlest trooper up the crow’s nest (mom or dad’s shoulders) to identify landmarks, like a barn or the road you drove in on, to determine your next move.

You’ll soon have a tribe of confident explorers, armed with all sorts of tactics, who enjoy the adventure of being lost.

I love hearing if you’ve given these a go, so let me know in the comment section whether you’ve tried a spooky idea, or if you have a few of your own up your sleeve. Also, we still have two long weeks to go of heightened negotiations (“No, you’re not dressing up tonight, it’s not time. You cannot have candy for dinner. I better not see you knocking on the neighbor’s door,”) before the costumes can officially be donned and the candy consumed, so do your friends a favor and send this over to anyone you know who could use some of spooky ideas as diversionary tactics leading up to the big night. 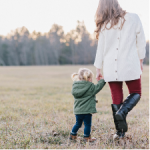 ABOUT THE WRITER Sheila Willobee
Thrown

Sheila's love of children has led her to explore many titles: teacher, party-planner, mom. Most recently, she's chosen the role of business-owner. Combining everything she's learned up to this point, she created Thrown: an eco-concious company that designs creative party decor, and delivers imaginative birthday adventures right to a child's doorstep. (www.partythrown.com)
Red Tricycle > Spoke Contributor Network > 7 Spooky (Not Scary) Family Halloween Activities Perfect for the 5 and Under Crowd