A Christmas Tree with a 53-Year-Old History 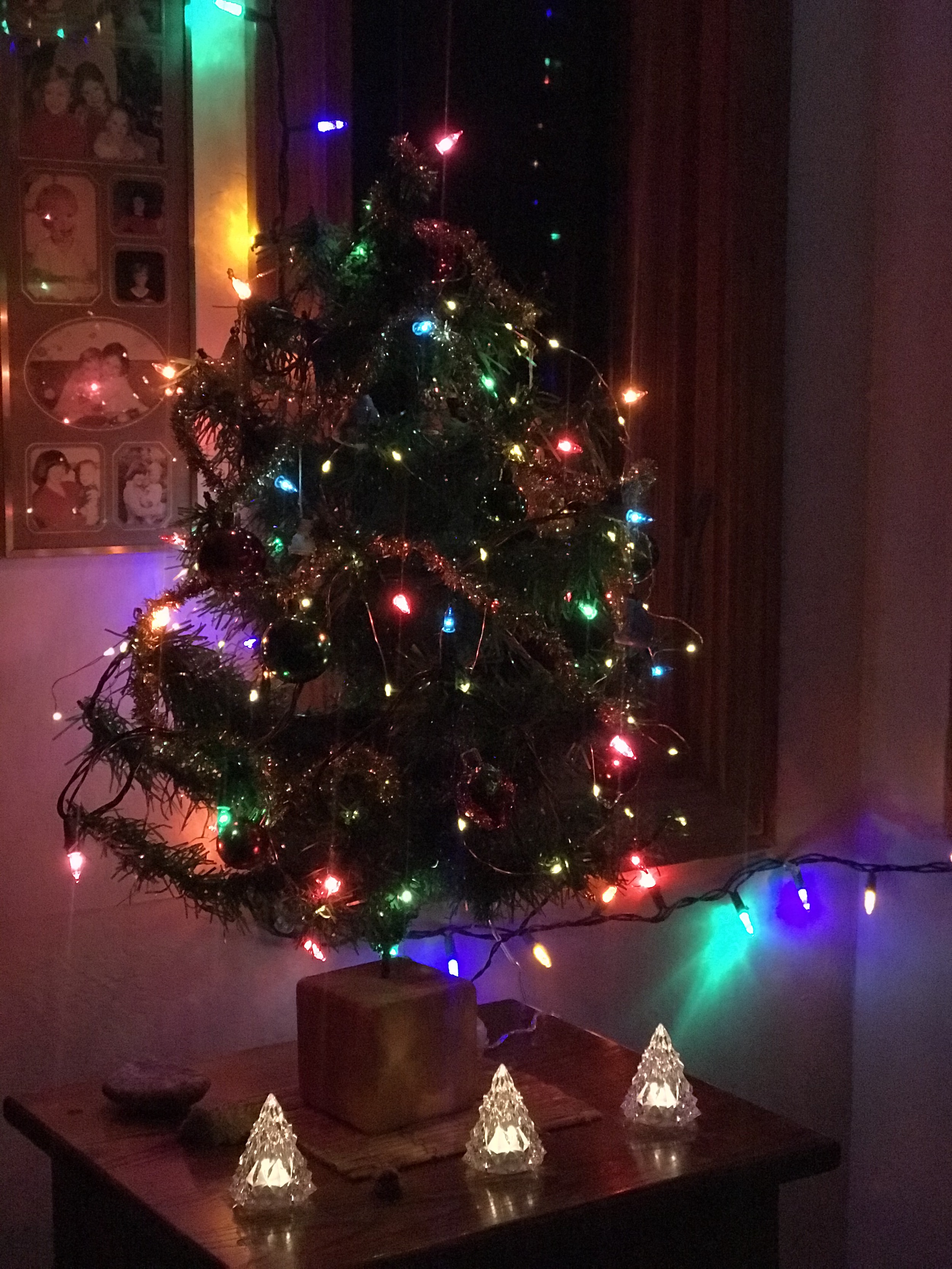 It was buried away in the attic, boxed up alongside the other miscellany of 53 years of marriage and 35 years of living in the same house. But its lights—all except one—still twinkle as brightly as they did when it was first unpacked from my mother’s suitcase in December 1967, when she and my dad spent Christmas together in the Caribbean as honeymooners, and she brought it along to surprise him.

Just a foot and a half tall, the little artificial tree played various roles in our family holiday history. For many years, it brightened up the bathroom I shared with my two brothers, helping us feel festive as we brushed our teeth and washed our faces in the December weeks that felt so long to kids who were dreaming of new LEGOs, Barbies, and G.I. Joes. Other times, it served as a seasonal nightlight for tired relatives snuggling up in the many-times-reupholstered sofa bed after Christmas Day celebrations full of gifts, games, laughter, and feasting.

It has a wooden block stand now, rather than the old tripod base that gradually lost its stability. And instead of the handmade origami ornaments from that first Christmas (paper was durable and easy to pack), it’s adorned with mini glass balls and a small tinsel garland from the dollar store. But the tree shines as cheerfully as ever in my parents’ kitchen this December, reminding them that although it’s been more than 50 years since they last spent Christmas just the two of them—no kids, no grandkids, no siblings, parents, cousins, or —no matter what, they still have each other.

They’ve had their ups and downs in the five-plus decades since they said, “I do.” Just 21 and 23 when they got married, they grew up together: She put him through medical school on a teacher’s salary, and he dared her to leave the safe familiarity of the Midwest behind and move to California. After one painful pregnancy loss, they had three healthy, (mostly) well-adjusted children, who’ve grown up and had kids of their own—in the space of eight years, my parents went from having zero grandchildren to six, all of whom love spending Christmas at Grandma and Poppa’s house, where the stockings are always hung by the chimney with care, and cousins always get matching PJs on Christmas Eve.

Even before the world turned upside down because of the pandemic, the last year and a half was an especially challenging one for my parents. In September 2019, my dad had a stroke, and their lives changed dramatically overnight. Thankfully, he’s come a long way toward recovery since then, but it’s not an easy road to travel, and it’s hard on both of them. It’s become even harder since March when social distancing and stay-at-home orders meant that visits from family and friends became much fewer and far between. Now in their 70s, they’re both high risk, and nobody who loves them wants to put them in danger. They appreciate this.

Which is how they find themselves, for the first time since 1967, planning to celebrate Christmas alone. We’ll all schedule time to Zoom with them, of course, and we’re all planning to make the same recipe for Christmas dinner—my grandmother’s homemade spaghetti. But the big house that’s usually bursting at the seams will be awfully quiet on Christmas morning. And with no gaggle of grandkids expected, it didn’t make sense to put up a big tree, so my mom’s thoughts turned to the little one from way back when. She dug it out of the attic, gave it its dollar-store makeover, and set it up where my dad would see it after an afternoon rest—surprising him again, 53 years later.

All those years ago, they never could have imagined what Christmas 2020 would have in store for them—but every single one of those years, they’ve spent Christmas surrounded by love and light. And it may look a little different this time around, but that hasn’t changed. Like the honeymoon tree rescued from the attic, the Christmas spirit is persistent, and like the family my parents built together, it will always be there for them.

ABOUT THE WRITER Betsy Bozdech
I'm a mom of two living in the Bay Area and working as an editor at Common Sense Media. My kids love screens, LEGOS, screens, books, and screens. I also love screens, but I love my kids more. I'm a runner, a reader, a TV watcher, and an ally.
MORE FROM Betsy:
Best Family Movies of 2020, Black History Movies That Tackle Racism, Must Read: Hilarious Online Summer Camps for Kids
Red Tricycle > Parenting > Adulting 101 > A Christmas Tree with a 53-Year-Old History