A Quest to Find My Mama Tribe

“Not my place. Not my people.” That was my stock line for the first six months of my California life. This was temporary. An Army move. I hadn’t chosen my own adventure; I had chosen to love and follow my hunk of a test pilot husband while he chased down the next place to play Chuck Yaeger. This was lesson one in Army life: suck it up, buttercup. It could be way worse. It was California, silly, not Kansas.

Still, I bristled at the idea of being a Californian. These people were techie hippies who dressed their kids ironically and drove electric cars in a dedicated lane of traffic. I had an affinity for a different place and people and a slower more traditional way of life, and I wasn’t planning to be swayed.

We were still waist-deep in cardboard when he started work, leaving Marilyn and me in our cookie-cutter townhouse, still confined by the two-nap existence and totally intimidated by the too-short on-ramps of the 101 which drop you onto the highway where you’re expected to fully keep up with the speed of the world.

It was time to make friends.

Making new friends in a new place when you’re a new mom is a trifecta of confusion for everyone. It’s hard to know what you’re looking for when you don’t know who you are anymore, but it turns out that laying out a quilt, touching the edges to someone else’s, unpacking your snacks and your nursing cover and your coffee tumbler and your life while your babies lie with their heads in the middle is a pretty good place to start.

When I showed up to my first blanket babies play date in the park, I had no idea who I would encounter or what we would talk about. What I found was a group of moms who, much like me, were finding their identities and their confidence again, albeit slowly. We bounced on balls and nursed and fed our babies, talked about our broken lady parts, kvetched about our husbands and our moms, told stories about who we used to be in our corporate lives, and traded babysitters’ numbers and baby-led weaning recipes like we used to trade intel on secret off-menu items at hot new restaurants.

Some time toward the end of that summer, just as the leaves were starting to fall off the trees in their casual California way, and Marilyn was starting to pull herself along the floor on her chubby forearms, I started to feel a little bit less like an obvious transplant. On those blankets, and during that what felt like an eternal summer of 70-degree days, a group of women had come together according to the year of our child’s birth, sporadically based on naps and transitions back to work and career changes, to be each other’s people.

We started showing up for each other in big ways. Our friendships were new and shiny, scary, sometimes vague. For a long time, each mom was in my contacts as First name: mom’s name and Last name: kid’s name. No last names were needed or used. We were each a woman with a strong and thriving pre-baby web, but we found that that web wasn’t holding us up any more, and yet somehow this newly forged network was serving us.

We offered friendship without judgment, company in the form of pushing swings next to each other, an unspoken understanding about the deep insecurities and fears that accompany early motherhood, and a place where you could be noticed.

When I left my career to stay home with my daughter, I went from micromanagement to the ultimate in absentee-management. At work, you check-in, you status-check, you status report, weekly report, report up and manage up and down. You share results and trends and insights, risks and dependencies. It all looks pretty. It gets communicated and praised. Sometimes it gets shot down. Sometimes you fail. Everything you do gets noticed.

At home, when it’s you and a 15-pound co-pilot whose favorite toy is a crackly bag of unopened chips, no one knows that you made the baby food from scratch. No one knows that you managed to get her in a matching outfit. No one notices if you showered or not. No one hears the ways that you talk to her in the car, speaking in French and singing James Taylor songs like you grew up hearing. No one realizes how much time you’re spending thinking about whether she is interacting enough, moving enough, babbling enough, or how you already think about what things she might be good at one day, or how she might hate you one day.

As my friendships blossomed, my marriage felt easier. When we had first arrived in California, I begged silently for Zac to notice every single aspect of my day—and when he inevitably didn’t, I felt crushed.  Being seen and noticed in even the most mundane ways by my growing tribe of women boosted my confidence and gave me a purpose. I found it easy to be with my husband at night, swapping stories of new adventures, playmates, and conversations with his tales of testing, flying and bureaucracy.

And then I got pregnant again. It happened on purpose, but at a time when most of the world feels pretty confident in assuming that it was on accident. I see your side eyes, world, and I raise you a ‘we were ready.’ We wanted our kids to be close together.

Now we weren’t just passing through California and raising a toddler, we were having a California baby, and cementing our existence here by testing the bonds of our new, fledgling network. Three thousand miles from family, surrounded by transient neighbors, married to someone who travels for half the year to remote areas of the world, I was about to stress test the hell out of this village.

Out of our crew of original blanket babies, I was the first to get pregnant again. Over the next Fall and Spring, I counted on friends to chase my newly mobile toddler as I predictably slowed down and grew huge under the weight of my 10-pound baby boy. And, just as the next summer was upon us, George was plucked from my womb (talk about a too-short on-ramp) while the 80s Pandora station in the O.R. played “Jessie’s Girl.”

The first woman to hold him other than me was one of the moms who had bounced next to me on a ball for the entire summer before because her non-napper needed constant motion. We came home from the hospital on my 36th birthday to homemade margaritas and enchiladas and our first visitors were my stroller workout buddies who came to marvel at the relative simplicity and perfection of a newborn baby.

Two weeks later, I braved my first playdate with my two under two and it was a friend from that first summer who, knowing how hard it would be to get out of the house on time by myself with both, brought lunch for me and held George while I scarfed it down with a nursing-mom voracity.

For three months, we didn’t cook a single meal. The parade of meals and nursing snacks and delivery fed our souls as we survived the first quarter with our cluster-feeding infant and our happy, curious toddler. On my first girls night out away from George, a friend drove me home and we sat talking for so long in her car in front of my house that I actually forgot I had a baby inside that house, and it wasn’t until my mother-in-law came across the lawn holding my crying baby that I snapped back to reality. My friendships were that good, that transporting, and that much-needed in a time when my needs were always last to be tended to on the list.

That year was one of intense work, exhaustion and joy. I am sure that Zac and I mouthed the words “Is this our life?” to each other a thousand times in that year—to both express the extreme joy in knowing that our family was perfect and complete, and the eclipsing exhaustion and self-doubt about whether or not we would be able to survive the day, the week, the month.

I was worried that our “two kid life” would make us pariahs. I didn’t know if anyone would embrace our chaos. I wondered if my friendships would even last, much less deepen, and then I woke up on George’s birthday, a year into being a parent of two, two years into California life, having a panic attack about how we would fit our flourishing village at the brewery where his first birthday party would be held.

Our village had grown and flourished so much, we didn’t know if we could fit everyone. And as seventy-five of our closest, newest, most intimate, trial-by-fire friends surrounded him to sing Happy Birthday, I looked out and couldn’t imagine it any other way. After hundreds of park playdates, afternoon porch hangs, toddler dinners, late nights without husbands and kids, stroller walks, weekend trips and dare-I-say millions of texts back and forth, I felt like I could finally say:  my place, my people.

Yesterday, we called to schedule the movers. They’ll be dropping off the wall of cardboard again exactly three months from today. In the intervening months, it will be my friends who carry us—who will plan goodbyes to all of our favorite wineries, hikes, playgrounds and restaurants, who will hug us a little tighter every single time we say goodbye, knowing we’re getting closer and closer to that final goodbye.

They will help me plan our road-trip cross-country, offer to watch the toddlers while we pack, help us clean out our fridge, and house us on airbeds for our final nights when all of our things are packed. They’ll hold me when the tears eat me alive and scoop up our kids in ways that only they can do. They are all our kids have ever known.

And then we’ll be off, to cultivate the unknown, to do the unthinkable, to walk out the front door again down an unfamiliar street, to somehow manage to merge onto the highway, and to lay our blanket next to someone else’s, and pray that somehow we’ll be lucky enough to find our place, our people, again. 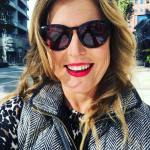 ABOUT THE WRITER Sarah Morford
n/a