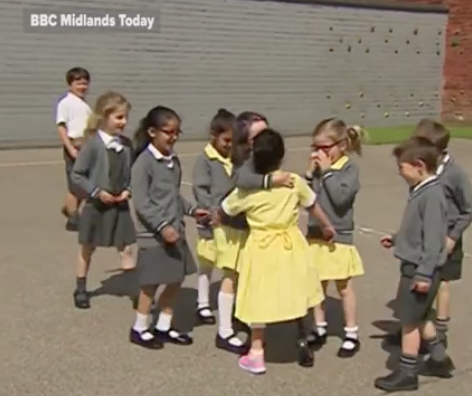 Fitting in and being accepted when you’re different can lead to tough moments for young kids, but there’s nothing stressful about the moment a seven year old girl named Anu shows off her new pink prosthetic leg for her classmates. Check out the video below of the joyous moment that’s sure to put a smile on your face.

The video of Anu, shot by the BBC’s Midlands Today features uniform clad school children at a primary school in Birmingham, England, running and playing in the yard. The kids greet Anu with smiles and hugs as she arrives sporting her new pink “sports blade” prosthetic.

Anu had her leg amputated at birth, and although she already had a traditional prosthetic, she received this special sports blade through a government program helping children in England in need of prosthetic legs. “It makes me run faster,” Anu told Midlands Today. It also helps her with “street dancing” and makes recess at school much more enjoyable.

How inspiring is this young girl and her friends? Share your thoughts in the comments.