Announcing a Pregnancy at Disneyland 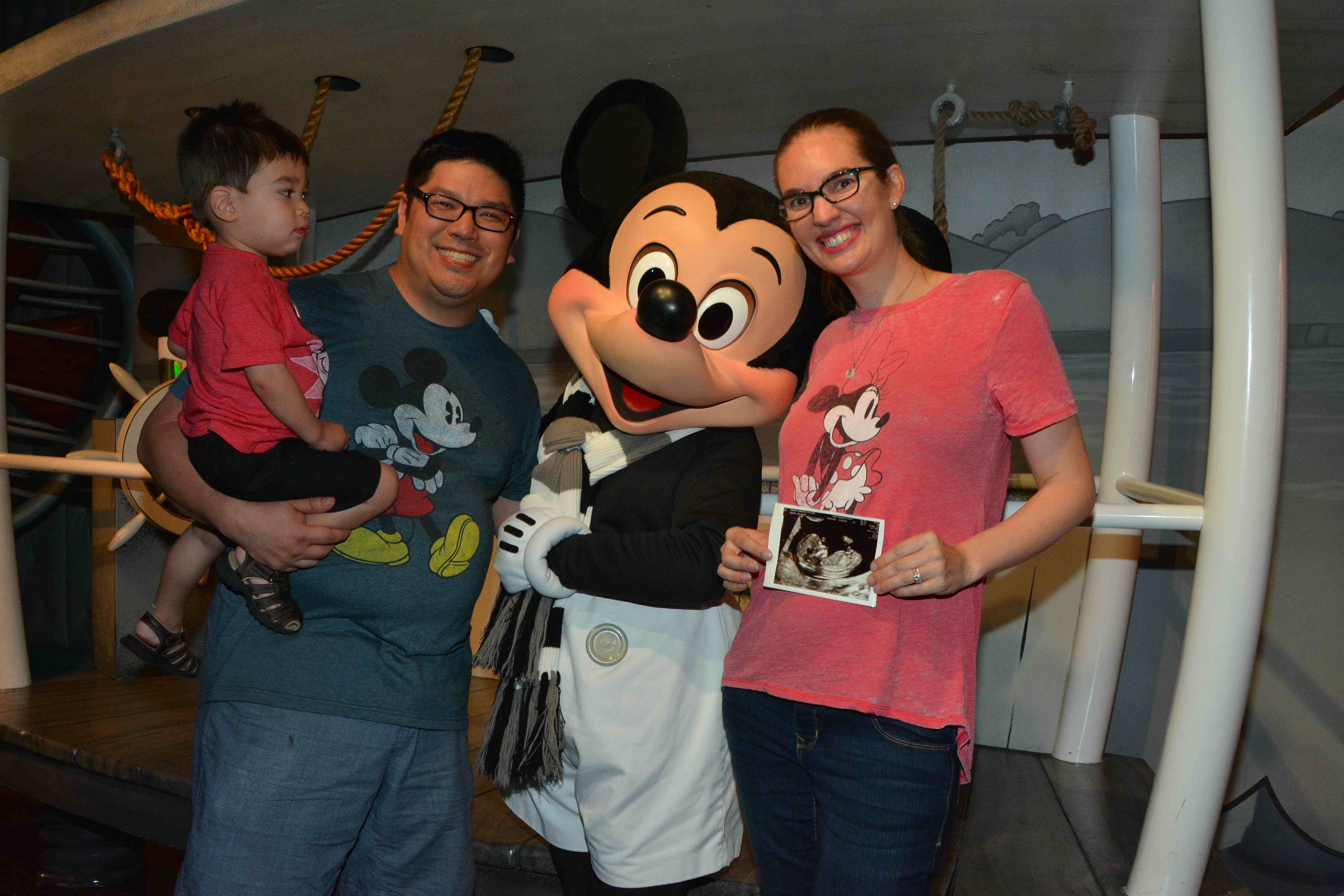 When I realized that I’d be 19 weeks pregnant during our first trip to Disneyland, I started researching ways we could incorporate a pregnancy announcement. I found lots of photos of Disney maternity shoots involving ultrasounds, so we made sure to pack a recent ultrasound photo. We didn’t do much of a pregnancy announcement with our toddler, Owen, so we thought this might be something special for our second child.

Upon arrival at Disney’s Paradise Pier Hotel, the front desk asked us if we were celebrating anything. My husband told him it was our first trip to Disneyland and he presented us with “First Time” buttons. Then my husband added that we were also pregnant with our second baby and he gave us a “Happy Birthday Baby #2” button. Things were off to a fun start!

During the evening of our first full day at Disneyland, we found ourselves in Toon Town just before the parade. We thought we had read that Mickey was not in his house at that time (and that’s what everyone was saying inside his house) but we decided to explore his house anyway. Low and behold, Mickey WAS home and we were quickly ushered in to see him! It was our first Mickey sighting at Disneyland and he was in his tuxedo. It was a fun way for Owen to meet Mickey and we got some cute family photos.

After we left his house, my husband pulled out our ultrasound photo and asked if we should head back in to see if Mickey would help us with a pregnancy announcement. In all the excitement of meeting Mickey, that hadn’t even occurred to me. So, we headed right back in.

Of course at this time, word had spread that Mickey was indeed home and a small line formed. We still were able to see Mickey within 2-3 minutes (which was awesome) and it was a different Mickey! We headed in to meet Steamboat Willie and told the PhotoPass photographer that we were also hoping that Mickey might help us do a pregnancy announcement. Her face lit up and she said that wouldn’t be a problem. We were the last family in our group to take photos, which was amazing because we weren’t rushed and had plenty of time. The photographer excitedly announced to Mickey that we were pregnant and Mickey gave me a big hug and started dancing around. We were able to get some family shots of me holding the ultrasound, photos of just the ultrasound, and photos of just Mickey and me with the ultrasound. With a second pregnancy, there really isn’t any pomp or circumstance so this was especially special to be able to do this for our second baby. It truly was a magical experience!

The next day, we went to Ariel’s Grotto for the princess character lunch at Disney’s California Adventure. Upon check-in, we were asked if we were celebrating anything special. We told them I was pregnant. During dessert, I was presented with an “I’m Celebrating Pregnancy” button on my dessert platter. It was a very fitting combination!

On our last morning at Disneyland, we headed back to Toon Town to see if we could get a photo with Minnie Mouse. It was finally warm enough to wear the Minnie Mouse dress I had packed. It was a 30 minute wait at Minnie’s House, but the line moved quickly. There wasn’t a PhotoPass photographer, so my husband took the photos of us holding the ultrasound with Minnie. She gave me a big “Mwwaaaah!” kiss upon hearing that we were pregnant.

Disneyland is a really cute place to celebrate a pregnancy because the cast members are accommodating and seem to enjoy helping guests celebrate milestones. Once your baby is born, you can send a birth announcement to Disneyland or Disney World and get a Happy Birthday message from the characters. We did this with my son and it was a fun surprise to receive during those exhausting first few months!

I'm a Seattle-area stay-at-home mom to my 2-year-old son Owen and I'm currently pregnant with our second baby. We love travelling with our toddler (locally and internationaly) and take advantage of the amazing events and classes offered around town. We like to be out and about!
MORE FROM Marcie:
Disneyland Toddler Itinerary and Tips, Fun Things for Babies on Kauai, Cruising with a Toddler
Red Tricycle > Spoke Contributor Network > Announcing a Pregnancy at Disneyland