The 10 Best Australian Family Vacations That Are Totally Doable 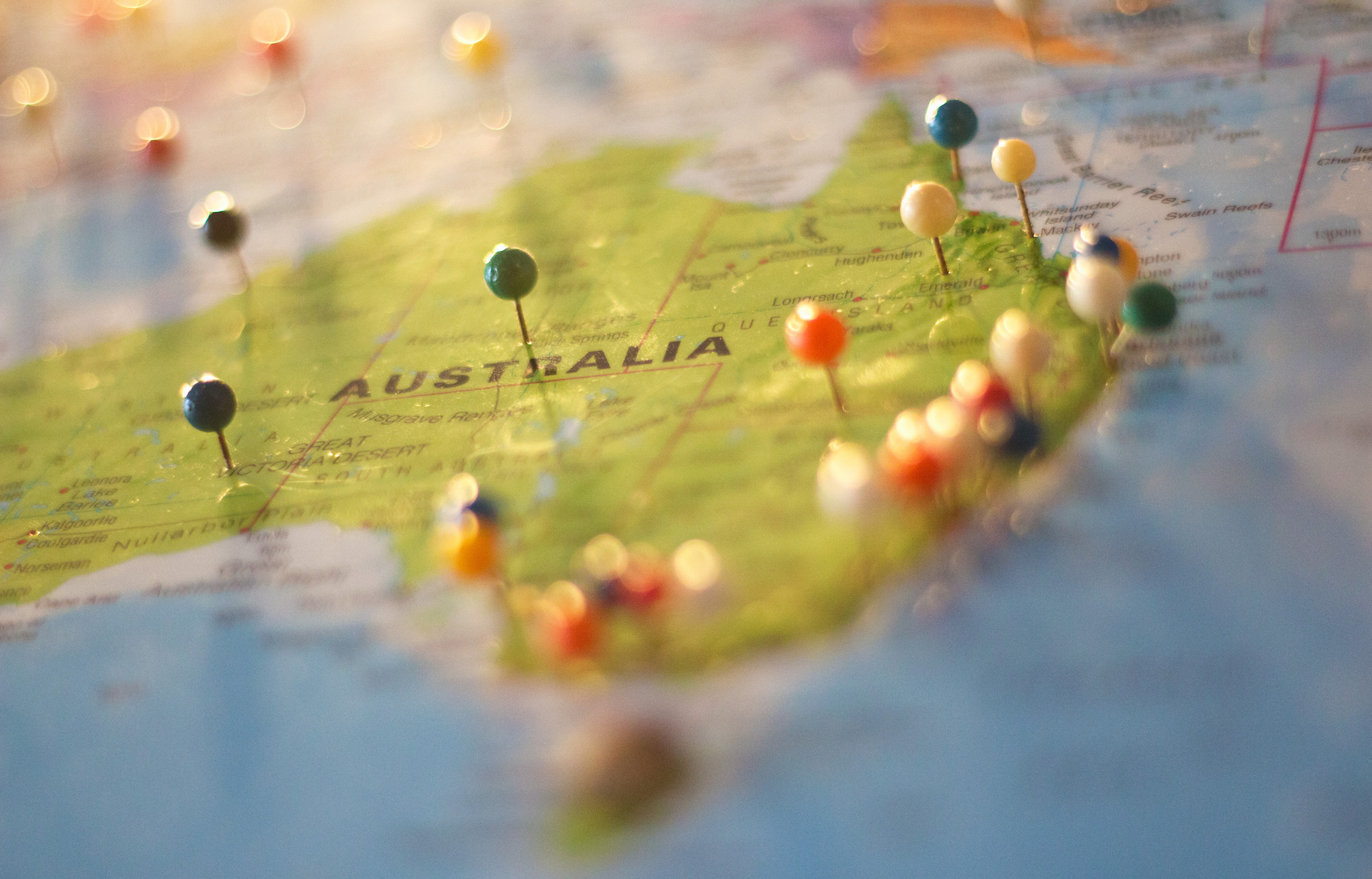 Even though getting to the Down Under can be an adventure unto itself, lame vacations don’t exist in Australia. Whether your family is looking for pristine beaches, cosmopolitan cities or magnificent natural scenery, you’re sure to find your perfect vacation destination Down Under.

Indeed, the main challenge for rookie visitors to Australia is choosing where to visit first! Since Australia is so vast, you need to plan ahead so you don’t waste all your vacation time in transit. Below, we’ll help you on your quest by sharing 10 of the top family holiday destinations in Australia.

Let’s start with the obvious tourist draw: Sydney. Located along Australia’s southeastern coast, Sydney is the country’s most populated and most visited city.

It’s almost a requirement for tourists to take a ferry boat ride by the Australia’s two iconic structures: the Sydney Opera House and the Sydney Harbor Bridge.

Once you’ve got that checked off your bucket list, get your “beach bum” on at Bondi Beach. Be sure to check online before your visit to see if there are any special Bondi Beach activities going on.

Just a few other exceptional attractions you should put in your Sydney travel itinerary include Royal Botanic Garden, the Queen Victoria Building, and Watson’s Bay. If your family loves the thrill of exploring an ultra-modern cosmopolitan city, then Sydney is your place to be.

Sometimes called the “Gateway to the Barrier Reef,” the Queensland city Cairns is a popular tourist draw for people who love exploring Australia’s natural scenery. Thanks to the large inflow of tourists over the years, Cairns has built up an exceptional travel infrastructure complete with restaurants, cafés and resorts.

You should have no problem finding many family accommodation in Cairns nowadays. The city of Cairns itself has a very relaxed vibe and is often used as a jumping off point for other attractions in the region.

As for things to do in Cairns with your kids, definitely take a walk on Esplanade Boardwalk, book a ride on the Kuranda Scenic Railway, and explore the Cairns Botanical Garden. In addition to the Great Barrier Reef, Cairns is a great home base to explore areas like the Daintree National Park, Port Douglas, and Cape Tribulation.

Tourists flood into Cairns between June and August to take advantage of the city’s milder winter temperatures. If you’re traveling to Cairns during the summer season, you might not have to face huge crowds, but you will have to contend with increased humidity.

Hobart is the largest city in the southeastern island state of Tasmania. Originally a penal colony, Hobart is now a huge tourist draw for artists, tourists, and even Antarctic adventurers. Fun fact: this city on the Derwent River is one of only five gateways to Antarctica.

Although Hobart may seem more like an adult tourist draw with its history and architecture, let’s go over what to do in Hobart with kids. First off, consider a visit to interesting historic areas like the Penitentiary Chapel, the Australian Army Museum Tasmania, and the old suburb known as Battery Point. If your child isn’t into history, maybe she/he will listen to a professional guide’s ghoulish tales on one of the nightly ghost tours offered in the city.

Besides the fascinating history of in Hobart, there are plenty of natural attractions here like Mount Wellington and Mount Nelson to explore. By the way, on good weather nights you could get a clear view of the Aurora Australis in the sky.

Located on Australia’s southeastern corner, the Gold Coast is the perfect location for sand, surf and sun. This city is split into four main districts, but the two most tourists stay in are called Broadbeach and Surfers Paradise.

There’s a total of 32 miles of beaches on Gold Coast and numerous opportunities to teach your kids to surf. Besides surfing, you could take part in a kayaking excursion, head out for some whale watching, or, if you feel up to it, go on a jet skiing adventure.

No visit to Australia is complete without visiting a few kangaroos. And what better place to visit Australia’s favorite animal than on Kangaroo Island? Yes, there is actually a place named Kangaroo Island (abbreviated KI) in Australia! At 100 miles wide and 30 miles across, KI is the third-largest island in Australia.

The easiest way to get to this island is by taking a boat from the southern city of Adelaide. Besides checking out kangaroos at the KI Wildlife Park, you and your family will enjoy visiting the impressive rock formations at Flinders Chase National Park, the caves in Kelly Hill Conservation Park, and the seals at Seal Bay. Some of the other unique fauna you’re bound to encounter on KI include koalas, penguins, and platypi.

Once you’re done exploring all that KI has to offer, you can head back to the Australian mainland to explore Adelaide’s top sites like the Glenelg Beach, the German Hahndorf settlement and the Adelaide Zoo.

Brisbane is Australia’s third-largest city and the capital of Queensland. The best way for tourists to get the most out of their Brisbane experience is to take CityCat ferries to all their destinations. There are at least 21 CityCats on the Brisbane River that can take you anywhere you need to go in the city. This is also a great way to orient yourself to the city without having to worry about driving around.

One of the major draws in Brisbane for kids is meet and greet koalas at the Lone Pine Koala Sanctuary. Museums that are bound to entertain kids include the Sir Thomas Brisbane Planetarium, the Queensland Maritime Museum, and the Queensland Museum and Sciencentre.

For families who aren’t afraid of heights, plan to scale the 941-foot summit of Mount Coot-tha and/or the Story Bridge for exceptional views of bustling Brisbane.

There’s far more to Canberra than snooty politicians, government buildings, and historical monuments. First-time visitors are often surprised just how much green space is in Australia’s capital city. Nature lovers have many hiking paths to choose from all around Canberra’s bushlands.

For the best aerial views of the city, climb to the top of the Black Mountain Tower or the summits of Mount Pleasant and Mount Ainslie. As you descend from your climb, you must want to visit Canberra’s highly respected Australian War Memorial. As you stroll through the Parliamentary Triangle, take a few pics by Australia’s most important buildings like the Parliament House, the High Court, and the National Library.

You’ll also find the kid-friendly Questacon, an interactive museum dedicated to the sciences, in Parliamentary Square. If you can, try to visit Canberra during the Floriade Flower Festival between September and October.

While it’s not as big as Hobart, Launceston deserves a spot on every serious traveler’s bucket list. Founded in 1805 by Tamar River, this city has plenty of charm and family-friendly attractions for an exceptional Tasmanian adventure.

The most noteworthy draw here is the lovely Cataract Gorge Reserve. Another wonderful nature reserve in the area is called the Tamar Island Wetlands. Launceston is also home to the charming Tasmania Zoo and the impressive Queen Victoria Museum and Art Gallery.

Finally, anyone in your family interested in vintage cars will love a stop at the National Automobile Museum of Tasmania.

Even if you haven’t heard the name “Uluru” before, you’ve probably seen this massive stone in Australian tourist booklets. Uluru, which means “Earth Mother” in the indigenous Anangu tribe’s language, is one of the most striking rock formations on the planet.

Scientists say this monolith has a height of at least 216 miles, extends into the ground 1.5 miles, and has a circumference of 6 miles.

If you have any budding geologists or anthropologists in your family, you can’t skip a visit to Uluru-Kata Tjuta National Park. Just so you know, this park in central Australia is split into the Ayers Rock Airport area, the actual park, and the Yulara resort area.

Besides Uluru, guests also get to visit Kata Tjuta, which are about 35 rock domes nearby. Today there are many tour options available for you to get the most out of your visit no matter your level of fitness. If you don’t feel up to hiking, then book a Segway, bike, and camel tour of the region.

About 60 miles northwest of Melbourne, Ballarat is a quaint city in Australia’s Victoria region. The key attraction here for families is the recreated town of Sovereign Hill.

As you walk through Sovereign Hill, you’ll feel as if you just walked into a time machine and came out in 1850s during the height of the Ballarat’s gold rush. Everyone visiting Sovereign Hill can’t afford to miss the 80-minute spectacular “Blood on the Southern Cross” that tells the story of the 1854 Eureka Rebellion.

You can learn even more about Ballarat’s history with the gold mining at the Gold Museum. A few other interesting spots for kids to visit include the Kryal Castle, the Ballarat Tramway Museum, and the Ballarat Wildlife Park.

Around 8.7 million international tourists visit Australia every year. Now it’s time for your family to join the millions who visit this enchanting land every year. Hopefully this list gave you a few great family holiday ideas to keep everyone in your tour group satisfied.

Look over this list again and do a bit of research before booking your flight to the Land Down Under. No matter where you choose to go, however, take this piece of advice to heart: bring extra sunscreen. Trust us, you’re going to need it. 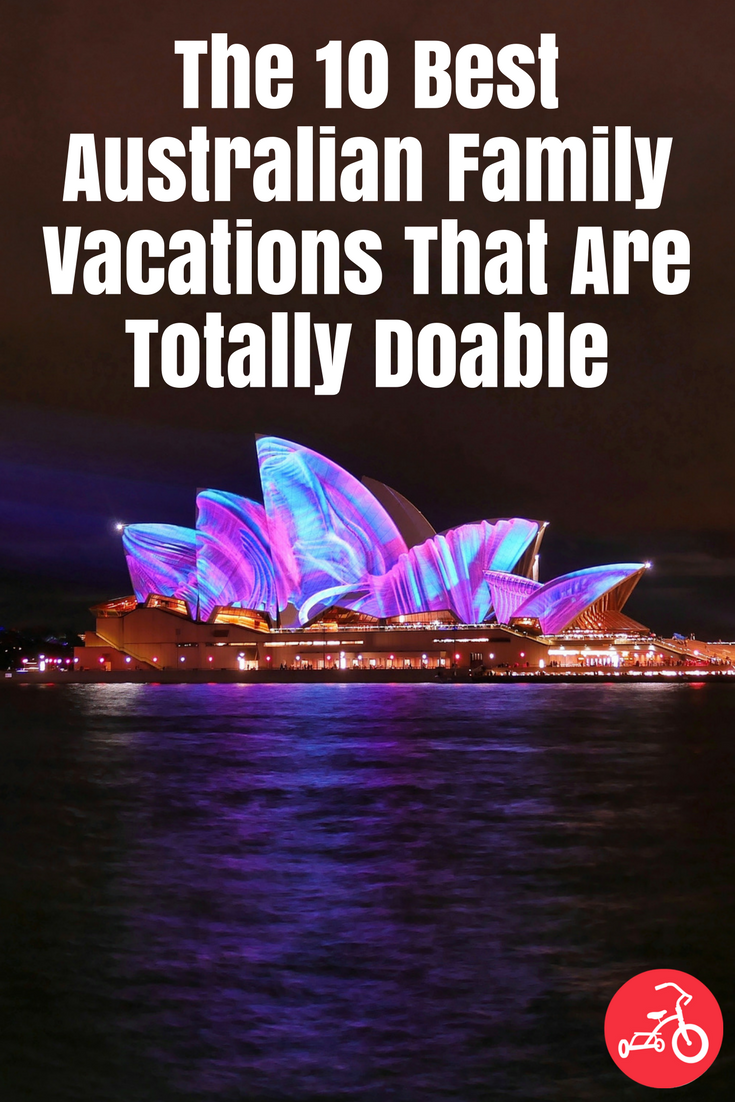 ABOUT THE WRITER Riya Sand
Riya is an inspired writer who is passionate about traveling, lifest‌yle and encouraging startups. She's always finding new ways to improve her work productivity.
Red Tricycle > Family Travel > Camping with Kids > The 10 Best Australian Family Vacations That Are Totally Doable