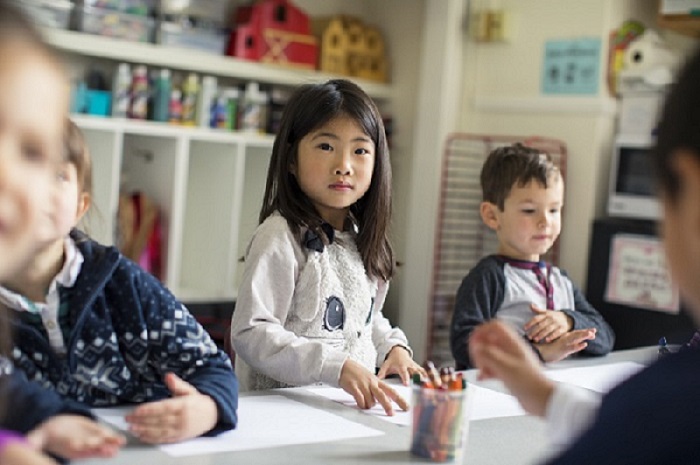 When you hear the words “summer slide,” what pictures come to mind? A water slide at the pool? A park slide on a hot day? Sunshine and summer fun?  Summer Slide is a term often used to describe the tendency for students to decline in achievement gains during the summer months when school is not in session. Fortunately, there are many ways to prevent the summer slide, including reading.

At Stratford School, we believe that reading plays a critical role in warding off summer learning loss by prompting critical thinking, building language skills, introducing new vocabulary and more. When children keep reading, they keep learning. We have curated a list of books by grade that will keep your kids turning the pages in between their playtimes. Enjoy!

The Last Peach by Gordon Gus: The story of two indecisive bugs contemplating eating the last peach of the summer in a hilarious picture book about anticipation and expectation. Summer’s almost over, and there’s one peach left. There’s also one big question in the air: Should someone eat it? What if it’s rotten inside? But what if it’s juicy? Should the bug who saw it first get to eat it? Should both bugs share it with their friends? Will anyone eat the peach?! EVER?!? A fun book to read together and the ending will surprise everyone.

Scribble Stones by Diane Alber: A heartwarming story about a little stone who was able to spread kindness to the world! This story starts off with a little stone who thinks he will become something amazing but then soon realizes he had become a dull paperweight. He’s on a mission to become something greater and in the process meets scribble and splatter and they all come up with a creative way to bring joy to thousands of people.

The Invisible String by Patrice Karst: A comforting story about two siblings who learn that everyone has an invisible string that connects them to everyone they love, anywhere, anytime. You are never alone. The people who love you here and those who have passed away are never far because if you tug on this invisible string they can feel it in their hearts. This is a remarkable message for children who feel lonely, scared, anxious, worried, etc. and this reassuring feeling could help a child cope with a variety of issues from everyday things, like a storm, to serious issues, like the death of a friend or parent. The illustrations are done in soothing watercolors and the simple lines highlight the facial expressions and feelings of the characters.

One-Third Nerd by Gennifer Choldenko: A funny story about a lovable family and the best dog ever from the Newbery Honor-winning author of Al Capone Does My Shirts and the Tales from Alcatraz series. Fifth grade is not for amateurs, according to Liam. Liam lives in the Bay area near San Francisco with his mom and two younger sisters. Dakota is fascinated by science and has a big personality but struggles to make friends; Izzy, a child with Down syndrome, makes friends easily, and notices things that go past everyone else. And then there’s Cupcake, their lovable German shepherd, who guards their basement apartment. Recently, Cupcake has a problem—she’s peeing in the house. The kids need to make enough money to take her to the vet before their landlord upstairs finds out. And Mom and Dad have said if Cupcake doesn’t stop, they will find her a new home. But the kids will never let Cupcake go. Can they save her?

The Serpent’s Secret by Sayantani DasGupta (series): On the morning of her twelfth birthday, Kiranmala is just a regular sixth grader living in Parsippany, New Jersey until her parents mysteriously vanish and a drooling rakkhosh demon slams through her kitchen, determined to eat her alive. Suddenly, Kiran is swept into another dimension full of magic, winged horses, moving maps, and annoying, talking birds. There she must solve riddles and battle demons all while avoiding the Serpent King of the underworld and the Rakkhoshi Queen in order to find her parents and basically save New Jersey, her entire world, and everything beyond it. There are two more books in this fun series, so get ready to spend a lot of time reading!

Clean Getaway by Nic Stone: Set against the backdrop of the segregation history of the American South, take a trip with this New York Times bestseller and an eleven-year-old boy who is about to discover that the world hasn’t always been a welcoming place for kids like him, and things aren’t always what they seem—his G’ma included. Great for kids studying civil rights.

War Stories by Gordon Korman: From the #1 New York Times bestselling author of Restart, a story of telling truth from lies —and finding out what being a hero really means. There are two things Trevor loves more than anything else: playing war-based video games and his great-grandfather Jacob, who is a true-blue, bona fide war hero. At the height of the war, Jacob helped liberate a small French village and was given a hero’s welcome upon his return to America. Now it’s decades later, and Jacob wants to retrace the steps he took during the war—from training to invasion to the village he is said to have saved. Trevor thinks this is the coolest idea ever. But as they get to the village, Trevor discovers there’s more to the story than what he’s heard his whole life, causing him to wonder about his great-grandfather’s heroism, the truth about the battle he fought, and the importance of genuine valor.