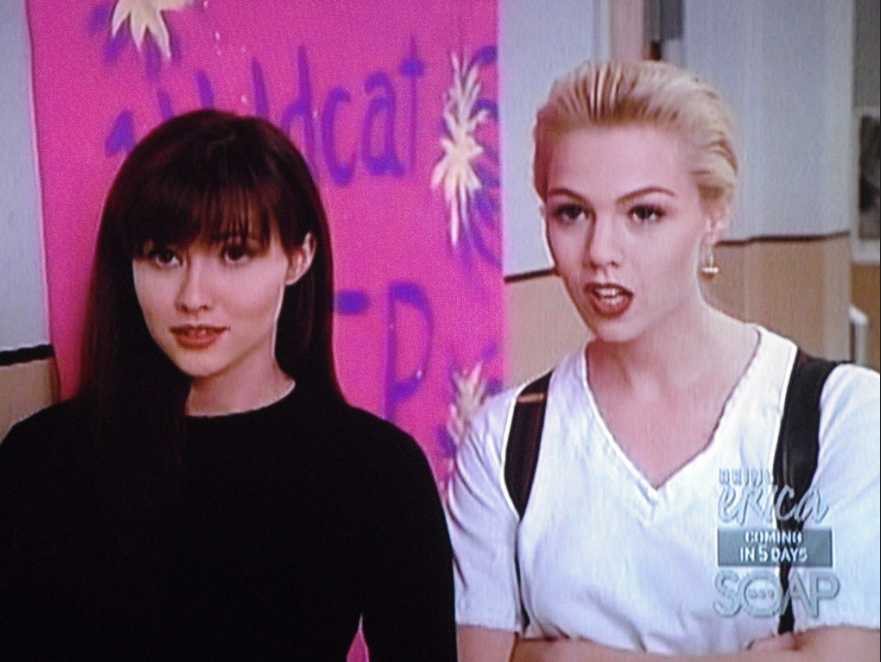 I graduated high school in 1993 and, while I proudly accepted my degree on stage with 364 of my classmates, I also received a second degree that day.

I also graduated from Beverly Hills, 90210 High School with Brenda, Kelly, Steve, Brandon, Dylan, Andrea, and Donna. I’d mention David, too, but I think he was a year behind us in school. Ahem.

When I started high school in 1989, Beverly Hills, 90210 was an edgy new show that depicted the lives of wealthy teens in Beverly Hills, CA. Brandon and Brenda Walsh, the two main characters, had moved to Beverly Hills from Minnesota and the first season followed their culture shock as they tried to fit in with kids that had more money than they had ever seen in the Land of 10,000 Lakes. The show was over the top and it was an instant hit. For me, as I was starting out in a new high school after having moved over the summer, the kids of West Beverly High and I had a lot in common. And, bonus: we were in the same grade!

Shut up. I promise I’m going somewhere with this.

As I progressed through high school, I never missed an episode of 90210 and neither did my friends. We mimicked their clothing, lusted over Dylan and his bad boy attitude and watched their lives unfold much the same as our did in the halls of our high school. That time when Brenda had a pregnancy scare after the prom? Yeah, I totally knew a girl who had to pee on a stick after our sophomore dance. Week after week, the cast of BH 90210 came into our lives and became part of the fabric of our high school experience. The show became a commentary on teenage life in the 90s and while we couldn’t afford their expensive cars and Rodeo Drive stores, we recognized their struggles as our own. And, come on: who could forget the time Donna almost didn’t graduate? I’m telling you: our graduation ceremony just would NOT have been the same if Donna hadn’t been allowed to wear her mortarboard, I’m sure of it.

Now, I am completely aware that these characters weren’t real. I mean, I’m not totally crazy. But, watching episodes of the show that dealt with teen angst over messy break ups, racial tensions, and the muddy waters of teen friendship, made me feel normal. I felt like I had “friends” in West Beverly High and when I watched the high school graduation episode, I was days away from my own leap into the real world. It was exciting and terrifying and I’m proud of my West Beverly High degree.

Over the years, I’ve watched reruns of the show and have fondly reminisced about the similarities to my high school days. We may not have had the Peach Pit but we had Denny’s and a local diner as our landing spot after proms and football games. I may not have had  Kelly’s red BMW as my daily driver but my best friend and I loved tooling around town in her little red two door Saturn all the same. I didn’t have any friends with famous parents and I certainly didn’t have the spending money that Donna’s parents gave her but I had a blast in high school and the cast of Beverly Hills, 90210 will always have a special place in my heart.

So, when Shannen Doherty announced she had cancer last year, I took the news almost as hard as I would have if a friend had told me. Not because I know her personally and not because I’m one of those crazy stalker fans who can’t separate fantasy from reality.  It was hard to swallow because I suddenly realized that I’m a grown up and I don’t have a TV show that helps me process my feelings after a friend tells me she has breast cancer. Brenda Walsh isn’t raising teens in a California suburb and Kelly isn’t restarting her career after staying home with her kids for ten years. Yes, Tori Spelling has done her part to stay in the headlines but, let’s be honest: tax evasion and a cheating, sex addicted husband are not problems I can relate to these days.

A few days ago, Doherty posted stunning images of shaving her head in preparation for chemotherapy. As I looked at the photos, I realized that the Class of 1993, both at my high school and at West Beverly, has long since grown up and we have real, grown up problems these days. Cancer is a real threat, our parents are aging and the carefree days of high school are long in our rearview mirror. It’s also made me realize that my prescription for a mammogram has been collecting dust on my to do pile for months. I’ve been avoiding getting my boobs squished if for no other reason than it scares the crap out of me to face my mortality. I’ve been coming up with excuses and reasons to skip making my appointment but now I know I need to get over myself.

Because if Brenda can face a breast cancer scare and Shannen can be a badass cancer patient, I can be brave, too. Now if only I had Dylan to hold my hand. …

ABOUT THE WRITER Christine Burke
Keeper Of The Fruit Loops