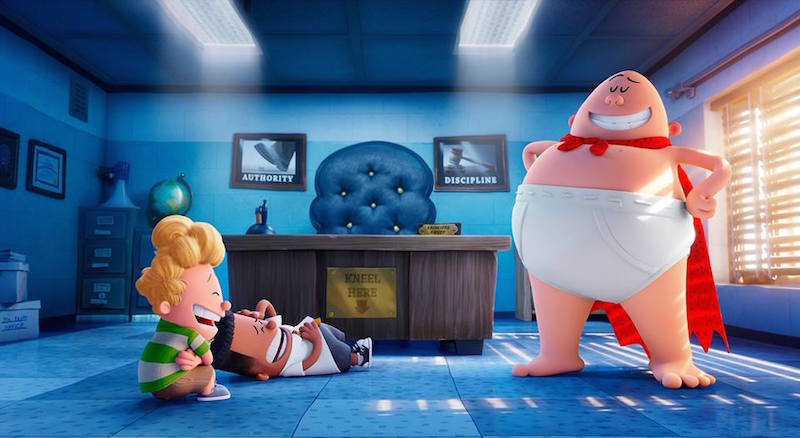 As a parent, the title alone might not exactly send you sprinting to the movie theater. However, if your family is familiar with the popular book series of the same name, you’ll know why you should buy your tickets immediately.

Captain Underpants: The First Epic Movie is the first feature inspired by the beloved children’s book series by author, Dav Pilkey, which follows the adventures of an angry elementary school principal who is hypnotized into becoming an over-enthusiastic, underwear-wearing superhero who has basically no super powers whatsoever. While the premise is definitely elementary-level humor, with Ed Helms starring as the dimwitted hero and Kevin Hart as young prankster Harold, you can be sure there are quite a few jokes in there that will fly right over your third graders head and hit you with laughter.

For fans of the book series, director David Soren explained in a recent interview with Kidscreen that the adaptation draws from several of the books, not just the first ones. Soren believes kids (and adults), whether book fans or newbies, will find the story relatable because, “It’s the classic wish fulfillment, let-the-genie-out-of-the-bottle kind of story where these two kids get to hypnotize their principal and do anything they want with him. I think the idea of standing up to authority, especially when the authority in question is Mr. Krupp, is a great way to have kids realize that they have power and should use it for good.”

The movie is rated PG for “mildly rude humor throughout” aka, about the same as watching a Spongebob Marathon. Captain Underpants premieres in theaters June 2.

Will your family be watching? Tell us in the comments.