Every U.S. President since 1976 has designated the month of February as Black History Month, along with an accompanying theme. This year’s theme being Black Family: Representation, Identity and Diversity. Also known as African-American History Month, this annual celebration gives us the perfect opportunity to support black-owned businesses in Chicago and recognize the achievements and contributions of African-Americans to the success of our city. We’ve gathered a wide-range of virtual and in-person events, walking tours, exhibitions, activities and learning opportunities to honor Black History Month with kids in Chicago. Let’s celebrate! 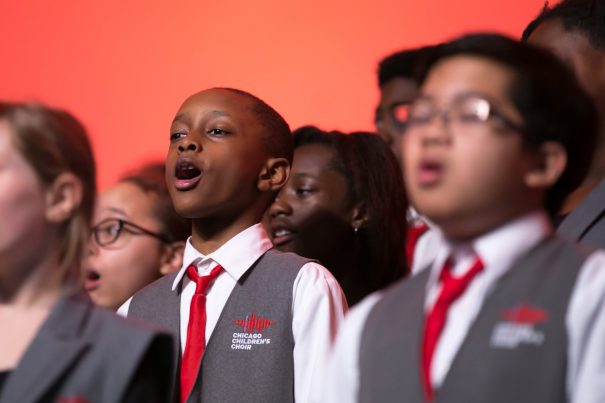 The Gene Siskel Film Center
Via their Black Harvest programming, The Gene Siskel Film Center will stream Our Right to Gaze: Black Film Identities, Feb. 12-25. Filmmakers gaze at themselves and the world around them, attempting to make sense of what is reflected back in this collection of six shorts. From gripping drama to heart-warming comedy, viewers will see timely stories from black artists that will take them outside of the ordinary. Online: siskelfilmcenter.org

Chicago Public Libary
Music and Social Justice Artist Fyutch will perform songs about African-American pride and culture to educate, entertain and empower the next generation. Topics for the Feb. 13 performance hosted by the Chicago Public Library include black hair and notable black women throughout history. Online: chipublib.bibliocommons.com

College of DuPage
College of DuPage's Chamber Singers is a choral ensemble that specializes in vocal chamber music of all periods. Selections that celebrate Black History Month will be featured in this Feb. 12 performance. Online: atthemac.org

Otelo Burning is set in 1989 South Africa, against a backdrop of brewing conflict. A 16-year-old Otelo Buthelezi takes to the water for the first time and it's clear he was born to surf, but tragedy strikes. On the day Nelson Mandela is released from prison, Otelo is forced to choose between surfing success and justice. This insightful and entertaining film captures a turbulent time in the history of South Africa. Join At the MAC for a moderated Zoom discussion, Feb. 17, 1:30 p.m. or 7:30 p.m. Online: atthemac.org 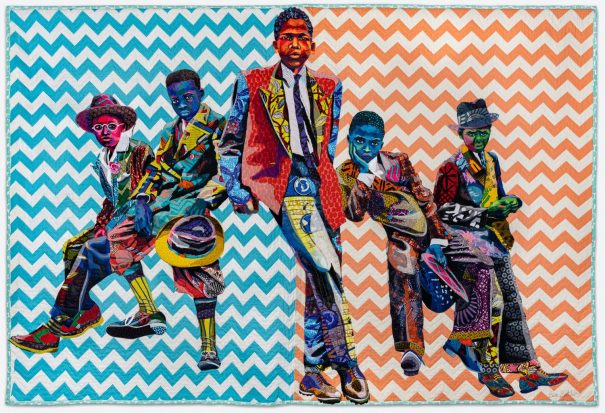 Southside Community Arts Center
The Southside Community Arts Center is hosting From the Center, a retrospective of works created by Faheem Majeed over the last 20 years. As the former Executive Director and Curator, Majeed's works are especially attuned to the history and legacy of this 80-year-old arts institution. The socially distanced presentation runs Feb. 13-Mar. 27 and is free, but timed tickets are required. Online: sscartcenter.org

As a complement to the exhibit, celebrated poet and author Marilyn Nelson and author Krista Franklin will host a Zoom conversation on Feb. 12 to explore historical and contemporary narratives of black life through such themes as family, community and the promise of youth. Online: artic.edu 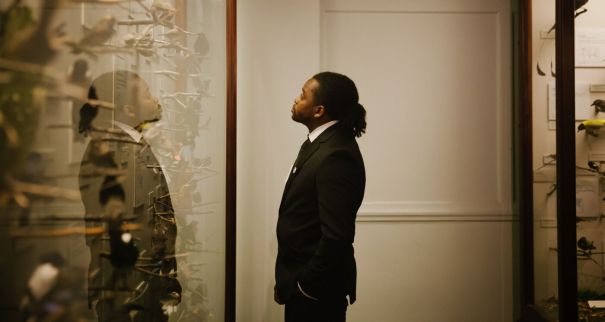 The Field Museum
The Field Museum is hosting a variety of online programs throughout February that highlight and amplify Black voices and stories. The live and pre-recorded events include a mix of Black History-themed behind-the-scenes tours, virtual exhibition viewings, and panel discussions with museum scholars. Online: fieldmuseum.org

Illinois Holocaust Museum
The newly reopened Illinois Holocaust Museum is presenting Mandela: Struggle for Freedom, which traces the history of the fight against apartheid in South Africa. Among many dramatic features and original artifacts, visitors will see a replica of the 8-foot by seven-foot cell where Mandela spent 18 of his 27 years in jail. Upon entering the cell, you'll find yourself immersed in a multimedia theatre with projections telling stories of repression and resilience. Online: ilholocaustmuseum.org 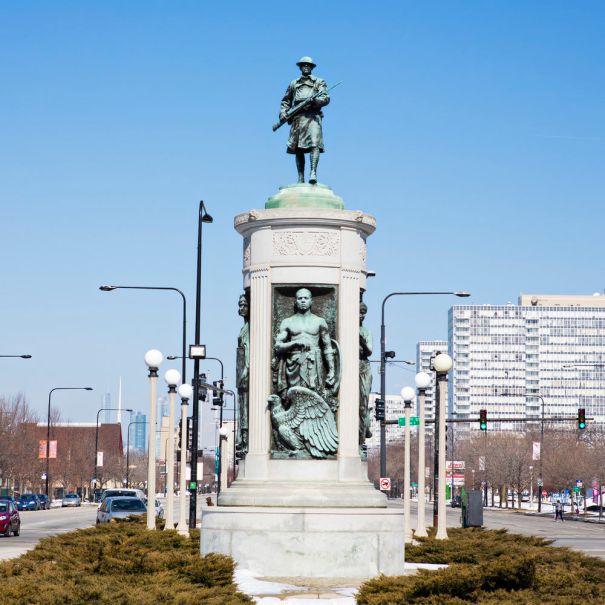 Monument to the Great Northern Migration
At Martin Luther King Jr. Drive & 26th Place, you'll find Alison Saar's bronze figure that stands as a testament to the thousands of African-Americans who migrated to Chicago in the early 20th century in search of greater freedom and opportunity. One of the traveler's hands is raised in salutation to his new home and in his other hand, he carries a suitcase symbolic of his journey, dreams and talents. The statue is oriented to the north to symbolize the traveler's destination. Online: chicago.gov

Victory Monument
The Victory Monument is one of the most famous landmarks for Chicago's African-American Community and is part of the National Register of Historic Places. The monument was built to honor the 8th Regiment of the Illinois National Guard, which became the 370th Infantry of the 93rd Division upon the start of World War 1. They saw action in France as the last regiment pursuing retreating German Forces in the Aisne-Marne region just before the war broke. Online: choosechicago.com

Obama's Kissing Rock
Black History Month also happens to encompass Valentine's Day. So, in the spirit of marrying the two, visit the sweetest Presidential memorial. On. The. Planet. Barack and Michelle Obama shared their first kiss in 1989 in front of a once-upon-a-time Baskin-Robbins on Chicago's southside and it's been commemorated with a simple rock with a metallic plaque. Online: atlasobscura.com

Home of Emmett Till
Emmett Till was a 14-year-old African-American who became an icon of the civil rights movement after he was lynched while visiting Mississippi in 1955. The South Side Home (6427 S. St. Lawrence Ave.) he shared with his mother was granted landmark status this past January to shield it from demolition or alteration. This is the first step for non-profit owners Blacks in Green to convert the home into a museum.

Bronzeville Walk of Fame
The honorees in the Bronzeville Walk of Fame have made extraordinary contributions to the African-American community, including Ida B. Wells, Gwendolyn Brooks, and astronaut Robert H. Lawrence. Ninety-one bronze plaques on medians, sidewalks and crosswalks stretch 10 blocks and the Monument to the Great Northern Migration and Victory Monument frame the permanent outdoor exhibit. Online: enjoyillinois.com 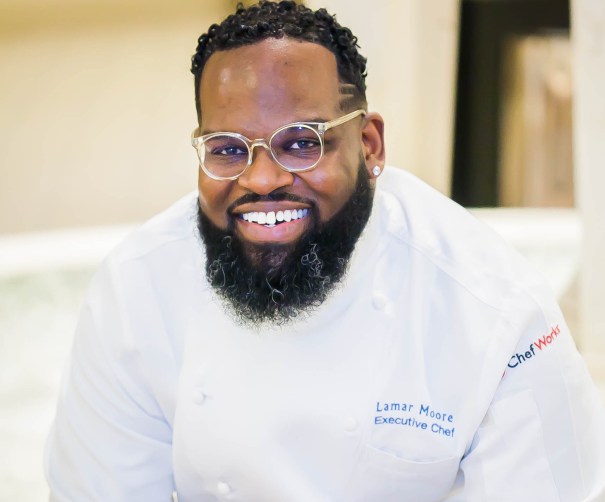 Virtual Cooking Class
Lettuce Entertain You is hosting a virtual cooking class celebrating African-American cuisine that benefits Urban Juncture and its efforts to revitalize the Bronzeville neighborhood. Participants can interact with the chefs as they learn about their culinary journeys and the influence of their heritage on technique. Online: leye.com

Chicago Public Library
Swing by the Chicago Bee Branch of the Chicago Public Library and pick up a Grab and GO DIY Kit. Inside the kit, kids will find all the materials needed to create their very own bookmark to celebrate African American History Month. The kit also includes a reading list of 50 African-American authors. Kits are available through Feb. 13, or while supplies last. Online: chipublib.bibliocommons.com

Celebrate the beauty of natural hair during African American Heritage Month by joining the Chicago Public Library for a how-to on making loc jewelry. Typically associated with Jamaica, locs as a hairstyle can be traced to civilizations throughout the world, including the Maasi in Eastern Africa and ancient Egypt. Create your own loc decorations using fun and simple jewelry techniques. If you can't make this live broadcast on Feb. 16 via YouTube, you can watch the archived event at a later time. Online: chipublib.bibliocommons.com

Join the Chicago Public Library via Zoom as they take a look at black inventors in America. You'll learn about inventors from Elijah "The Real McCoy" McCoy to Lonnie Johnson, the inventor of the Super Soaker. Online: chipublib.bibliocommons.com

Black-Owned Businesses to Support for Black History Month (& Beyond)

28 Black History Month Resources for Kids of All Ages

26 African-American History Books to Read with Your Kids 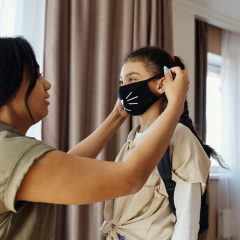 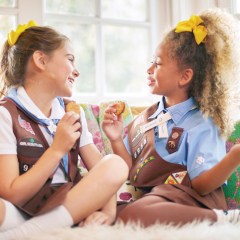 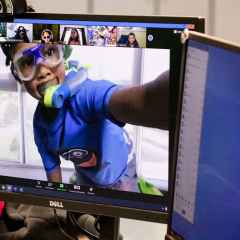 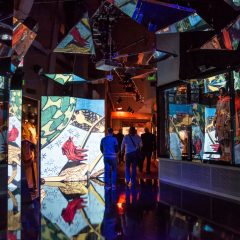 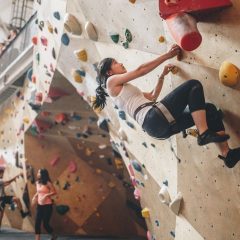 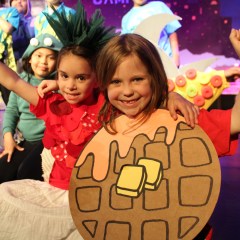 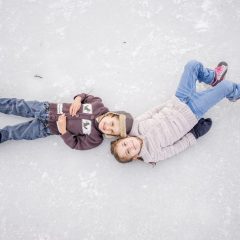 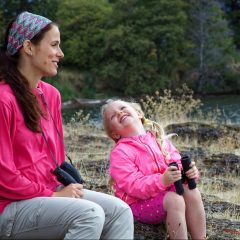 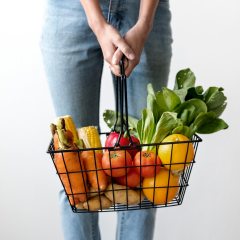 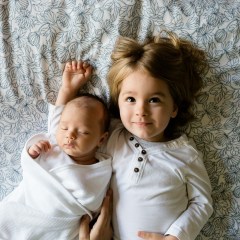