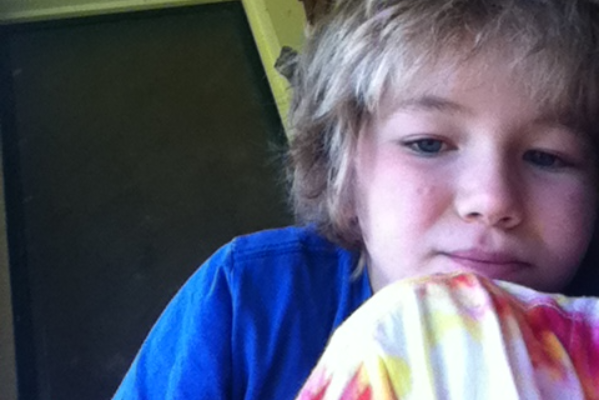 When I was 7 years old, my family moved from Colorado Springs to Southern California. It was the end of the 70s and SoCal still had a few citrus groves that had yet to be plowed under by the slow motion shock-wave of humanity that was filling the basin of the Inland Empire like a great human bathtub ring.

The culture shock I experienced was enormous. I didn’t understand how to act with the kids in my new school and I suffered for it. They trained me, however, in the brutal way that kids do, and it wasn’t long before I learned to find my strengths, or rather, the weaknesses in those around me so I could climb out of the basement of the social pecking order.

It has taken me a long time to sort out the psychological impact that the shock of being thrust into a new cultural milieu at that tender age had on me. For much of my adult life, I have been either running away from my past or running toward something I thought I wanted or needed. Now, firmly entrenched in middle-age, I have stopped running and begun to be comfortable with who I am and where I am in my life.

From this new, more centered place, I am able to look back on who I was at various times in my development with more curiosity and less cringing, (although I do still cringe occasionally.) As I re-examine this child who I was, I reflect on what I knew. What did I actually understand about my plight and my predicament at the time? What did I get right?

Children, as we all know, are remarkably resilient. They are flexible and adaptable to new stimuli and situations in a way that adults are not. This is a survival instinct. What we lack in power and personal autonomy, we make up for in fluidity. We learn what works and what doesn’t at an emotional, pre-cognitive, level. The baby cries because it is uncomfortable. A parent will do anything to stop that sound, biologically designed to cut us to the quick, and the child understands, intuitively, that crying works.

My youngest son, at 8 years old, still sometimes tries to use that old trick to get what he wants, and is learning that it doesn’t work so well anymore. He is the same age I was when I was transplanted by my parents into a new place and culture. He has been surprising me, lately, as I have realized he understands much more about what is going on in his world than I was ready to believe. He crawled into my bed last night after my wife and I made the mistake of trying to discuss logistics for the weekend well past our bedtime. He snuggled up to me, after my wife went to go sleep on the couch, and observed, “That didn’t go so well…”

What did I understand at that age? How aware of my world was I? How can I use that information to help me understand and communicate with my kids about what they are going through?

I have a very vivid memory of that time in my life that I think provides insight into what I knew and illustrates the depth of knowledge and understanding that children possess quite early on. It is also illustrative of the difference between knowing intuitively versus knowing cognitively.

At 8 or 9 years old, acclimating to my new surroundings, I recall wonderful visits to the house of my mother’s first cousin, Donna. Donna and Bob had four sons who were teenagers. They rode motorcycles and played in rock bands and were the coolest people I had ever known. They mostly tried to escape whenever my family came to visit. I desired their company much more than they desired mine. I still remember playing a game of hide-and-seek with Don, the youngest, only to hear the sound of a motorcycle starting up in the garage, and emerging from the house in time to see him riding away. I learned something that day.

My parents brought my sister and me to Donna and Bob’s house on a weekly basis for several years. It was a beautiful house. There was always a jar of candy on the coffee table. They had a pool with a spa in the backyard,  a ping pong table and a pool table under the roof on the porch, a putting green with real, short, authentic putting green grass and a cup. It was a palace. The adults had an established Pinochle game that had a running tally. The married couples never played on the same team. Being teammates with your spouse in Pinochle, it is said, can be hazardous to a marriage.

Our families grew closer together. Thanksgiving. Christmas. Fourth of July. My mother worked as a secretary at the pool business Bob was running. My father and Bob opened a joint business venture, which Bob funded and my father ran. I watched their boys, my idols, race motorcycles in the desert. I learned to skateboard in their driveway.

I vividly remember the night when it changed. The Pinochle game was quiet. Tense. The adults disappeared into the bedroom to talk in pairs. We left early, without eating dinner. We didn’t go back to their house as often after that. I don’t recall if I asked any questions about the sudden change in our relationships, but if I did, they were never answered.

The business that my dad had with Bob eventually failed. My mother went back to school and became a Drama teacher, a job that she was born for, and quit being Bob’s secretary. Bob’s pool business grew exponentially as the Inland Empire filled up with people. He retired young and gave the business to his sons, and took to flying his Cessna as a full-time hobby. I even worked for Dave, the eldest, and Danny, the third son, one summer when I was in college as a pool cleaner. Bruce, the second son, developed a brain tumor in his twenties, and lived, somewhat diminished, for another 30 years. So life and our relationships continued, but I never forgot the day that they had changed.

The last time I saw Bob was at my mother’s funeral in February of 1996. She had died in a freak accident at work, a fall from the stage of the school where she taught drama, into the orchestra pit. Bob died when his plane crashed two weeks later.

It wasn’t until 15 years later, in 2011, that I saw Donna again at an impromptu family reunion. Kids, grandkids, relatives, and friends splashed in the pool outside, chatted in the deck chairs, or watched something on the large TV in the living room. I sat down at a table filled with food across from Donna and my father, both now in their 70’s. There was a layer of privacy afforded by the chaos of sound and movement at the party. I hadn’t thought much about that night, so long ago, when our families had diverged, but seeing the two of them sitting there together, after so much water had gone under the bridge, I brought it up. “What happened that night?”

I knew the answer before they told me. Bob had fallen for my mother, she had that effect on people, and he had declared that he wanted a divorce from Donna and to whisk her away from my father. It wasn’t that he didn’t care that it would destroy both families in the process, I think it was more likely that his emotions just didn’t leave him any choice. My mother didn’t feel the same way. I am sure she was distraught by the damage that was being done by this man’s undoubtedly real and genuine feelings.

A cloak of silent understanding wrapped around my elders and me at that table in the midst of the party. Donna looked at me, the hurt still present in her eyes, “I would never have told you this, but since both your mother and my husband are dead…“ My father nodded silently, somber. “Don’t tell your cousins, they still don’t know.”

How did I know? At age 9 or 10 such deep truths about relationships were not available to my thinking mind. But, intuitively I knew—not the details, but the truth of the emotion. I had stored it away in a place where I could use it, learn from it, understand it when the time was ripe. This is what children know and how they understand. We may try to hide things from our kids—the sordid details of our messy adult lives, but they know. Children are highly attuned to the emotional currents in their lives. Their survival often depends on their ability to navigate those fraught shoals.

I don’t know if my cousins or my sister ever made these connections, I haven’t talked to them about it, as Donna had requested. She has passed on as well at this point. I would tell them if they asked, but it hasn’t come up. What I keep in my mind and in my heart is the knowledge that my own kids, and all the children I am blessed to know, perceive and understand much more about the world around them than we are aware of, and we had better act accordingly.

ABOUT THE WRITER Lonny Edwards
Lonnywrites

A father, a husband, a writer, a builder, a musician, an artist, a lover, a player, a gamer, a friend, a wiffler, a creator, a yogi, a teacher, a believer, a dreamer, a giver, an owner, a community member, a snowboarder, a biker, an actor—and some other stuff too.
Red Tricycle > Spoke Contributor Network > Children Do Understand Emotional Undercurrents—I Should Know