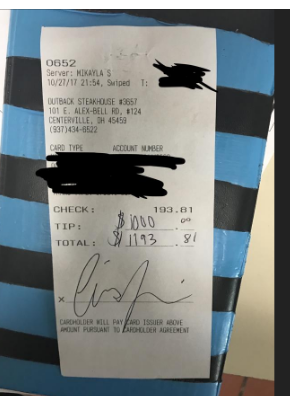 If you think celeb couple Chrissy Teigen and John legend only dine in trendy NYC spots, forget about it. The pair, along with daughter Luna and a few friends, were recently spotted eating at Outback Steakhouse — in Centerville, Ohio. Okay, so a supermodel eating…umm, yes Teigen eating at an Outback Steakhouse isn’t exactly breaking news. Sure, it’s out of the norm for what we see celebs doing. But the real story here is the tip that Teigen left behind.

Waitress Mikayla Scott is one lucky lady. She was just working a regular ol’ Friday night shift when Teigen, Legend, their daughter and about four others came in. The waitress told Ohio’s WHIO-TV 7, “She walked in with all her glam.” Scott went on to add, “I was so nervous I was going to do something wrong.”

Whoa! One thousand dollars? The lucky waitress, whose husband also works at the restaurant, shared part of the mega-tip with her co-workers. The rest reportedly went towards fixing her in-need-of-a-repair car.

What’s the biggest tip you’ve ever left or received? Tell us in the comments below.