They already fascinate us with their strange calls and bright colors (no, we’re not talking about your toddler) but here are a few facts you might not already know about animals to spot at your local zoo or animal conservation center. Read on for 13 wacky or just plain cool tidbits to share with your own little wildebeests. 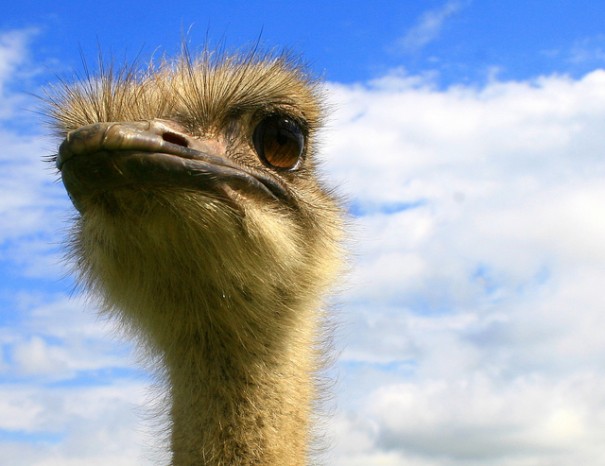 1. The Pacific Chorus Frog (Pseudacris regilla) is the only frog that actually goes “ribbit!”

3. Swans have 25 vertebrae in their neck, compared to a human’s mere seven. And giraffes only have seven, too!

4. Sloths really are slow. So slow, in fact, that in the humidity of their native climate an algae actually grows on their fur. This gives them a greenish hue, which acts as camouflage.

5. The Black Widow’s venom is 15x more poisonous than a rattlesnake (Latrodectus hesperus).

6. The Fishing Cat (Prionailurus viverrinus) uses its flat, short tail like a rudder to help “steer” its direction when swimming.

8. Reindeer have beards? In the winter time reindeer grow their facial hair long enough to cover their mouths, which protects their muzzles when grazing in the snow.

10. Penguins are so well insulated they are more in danger of overheating than freezing!

11. The Death Feigner Beetle (Cryptoglossa verrucosus) is so named because when frightened it falls over and pretends to die, with legs up in the air and rigid body, until danger has passed.

12. Komodo Dragons (Varanus komodoensis) are the world’s largest lizard and can be as much as 200 lbs. and as long as 9 feet. They have a venom in their mouths that causes blood loss and low blood pressure in their victims. Freakier still, they simply follow their prey around until it dies.

13. A newborn kangaroo is the length of a paperclip.

What’s your favorite freaky animal fact? Share it with us in the comments.