Dads! You Need to Get Involved in Playtime and Here’s Why 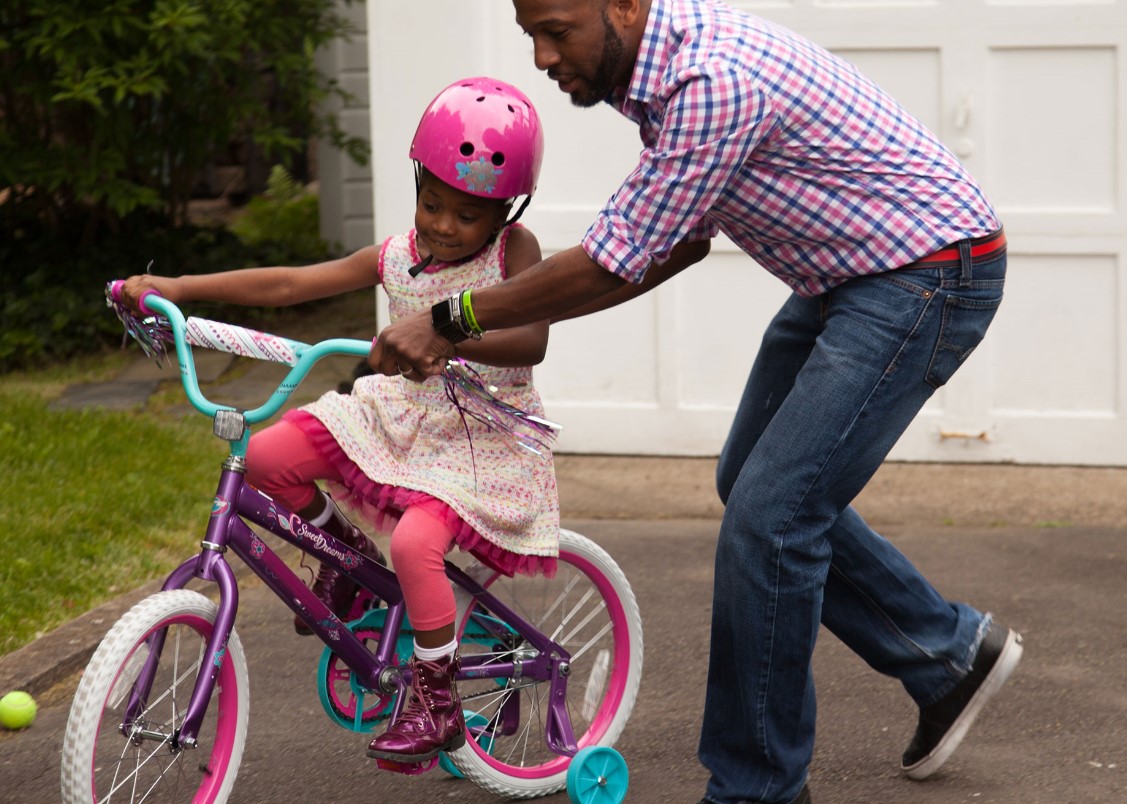 When it comes to playtime, moms and dads tend to interact differently with their children, but both parents play vital roles in their young children’s lives.

I spoke with Ken Seiter from The Toy Association, who provided me with the perfect example of how important it is for dads to make time to play with their children, as he told me about a play experience with his daughter: “I remember a time many years ago when I stayed home with my kids while my wife went out with her girlfriends for the evening. At the time, my toddler daughter was very into hair barrettes, brushes, and anything to do with hairstyling (likely from watching my wife) and had created her own make-believe hair salon. At one point she demanded that I sit down for an appointment. I reluctantly agreed knowing that if I didn’t, she would likely dissolve into tears.”

Ken went on to share, “Of course I ended up with multi-colored bows and barrettes in my short hair, but it was while she was placing barrettes in my hair that she began to chatter—I learned her favorite color was purple (I thought it was pink), she had a boyfriend at preschool named Josh (what!), and that her favorite teacher was Miss Nicole. As I reflect today on that memory, I realize how important it was for both of us to connect through play activity.”

Quite simply, it’s crucial for dads to participate in unstructured play with their kids. No matter what the age, kids learn valuable lessons from this time spent together, according to The Genius of Play, an initiative spearheaded by The Toy Association to raise awareness with parents, caregivers, and educators about the importance of play.

Through play, dads provide an alternate type of role model than moms. They show that boys can be caring and nurturing while building confidence in girls. It is also an opportunity for dads to teach their children about love.

“Men tend to roughhouse a little more than woman, but it’s very important that dads play in a gentle way, too,” said Dr. Erik Fisher, Ph.D., a licensed psychologist, author, and Genius of Play expert. “Fathers can model the type of partner they want their daughters to spend their lives with, in part, through play. In playing with their sons, they can model the ‘language’ they want them to learn to speak to others, especially their partners. Men, too often, are socialized to show the hard masculine side of love, and it’s really important that we realize that we can show what love is and what love isn’t throughout the play experience.”

Playing together strengthens bonds between children and their parents. One of our society’s biggest challenges is multiple distractions that take us away from playing with our kids—from technology to work commitments to household chores. Kids look up to their moms and dads, and in a generation where typically both parents work outside the home—there is a need for dads to provide emotional comfort to their kids.

“Your kids will feel so much more connected when you take the time to play, and it doesn’t have to be much. Even just playing with puppets, tickling, joking around—things that are spontaneous – you can create a more intimate connection in that moment with them,” Fisher said.

Tyler Kearns, program coordinator for the Clayton Kid Zone in Clayton, MO and a “play ambassador” for The Genius of Play, added that through play dads can experience the world as their son or daughter does, which can give insight into when they are upset, frustrated, overjoyed, overtired, or feeling any other emotion. “Ideally, the stronger the relationship is in the early years, the easier it will be to help them manage their emotions and life experiences in the later years,” Kearns said.

Research has also found that there are health benefits for kids who get to experience playtime with dad. A 2017 study published in the research journal Obesity found that fathers who had increased involvement with childcare, particularly with physical tasks, such as playing with kids, taking them for walks outside, bathing or dressing them, decreased the likelihood that their kids would become obese.

If you aren’t sure where to start, here are five fun activities dads and kids can to do together:

1. INDOOR BASEBALL (4+) – Any season can be baseball season. Simply use the long tube from wrapping paper as your bat and an air-filled balloon as the ball. Designate bases (furniture, or areas where you’ve placed a newspaper or a towel). The pitcher should stand in the center of the four designated bases, with the batter beginning at the spot designated as home base. Then it’s time to play ball!

2. QUICKSAND (5+) – Lay two even trails of pillows (or towels or newspaper) on the floor. These are the “stepping stones” kids need to land on to avoid falling into the quicksand (the floor)! The pillows should be at least a foot apart from each other. Form two teams. Each person takes a turn jumping from stepping stone to stepping stone. Any child (or adult) who touches the floor must start from the beginning of the trail again. Whichever team makes it to the end of the trail first wins!

3. SCAVENGER HUNT (6+) – Write a list of a dozen or so things the kids should look for (if playing with younger children, use a shorter list), and see how many of those things they find. This is a great game to play, indoors or out! Indoor objects can be a book, a blue sock, etc.; outdoor objects can be a green leaf, a rock, a feather, etc.

4. 20 QUESTIONS (7+) – The oldest player is IT and goes first. Have them think of a person, place or thing, without saying it aloud. Each other player can ask up to 20 yes or no questions to try and guess the answer! After asking 20 questions or guessing the correct answer (whichever comes first) switch turns at being IT.

5. HOMEMADE MAP (7+) – This is a great activity to do before setting off on a trip with the kids. Talk with your kids about where the family is headed. Then, together, draw a map, including your starting point and destination, and major stops and landmarks along your route. Jot down the names of noteworthy places, and make sure to illustrate your map!

ABOUT THE WRITER Anna Yudina
The Genius of Play

Anna Yudina is the Director of Marketing Initiatives for The Toy Association™, a not-for-profit trade association that represents toy companies. Currently, she’s spearheading The Genius of Play™, a parent-focused movement raising awareness of play as a crucial part of child development and encouraging families to make time for play daily.
MORE FROM Anna:
The Benefits of Imaginative Play Are Greater Than You May Think, 5 Traditions to Start This Holiday Season, How to Shop for Holiday Gifts for Kids with Special Needs
Red Tricycle > Spoke Contributor Network > Real Talk > Dads! You Need to Get Involved in Playtime and Here’s Why