Curtain Call: The Music Venues You Should Visit NOW

We’ve officially entered the dog days of summer. If your kiddo is totally over the splash park but still wants to eek out a little more fun as the school year inches closer, check out the late summer line-up at one of these family friendly venues.

Wolf Trap’s Children’s Theatre- in- the- Woods
A longtime tradition at the area’s premiere outdoor venue, Wolf Trap’s Theatre-in-the-Woods brings high caliber performers to a cool wooded setting.
See now: Mil’s Trills on Aug. 6 and 7
Shaking up kids’ music like a snow globe full of snippets from childhood and world travel experiences, composer and multi-instrumentalist Amelia Robinson of Mil’s Trills is dedicated to keeping adult toes tapping, if not up and dancing along with the little ones. A recent artist in residence at New York City’s Lincoln Center and a featured performer on the First Lady’s Partnership for a Healthier America childrens’ album, Mil’s Trills makes everyone a member of the band with a personal vibe, and all-inclusiveness themes that run throughout the upcoming new album “Now that We’re Friends.”
See later: Dan Zanes Song Gusto Hour on Aug. 8

Strathmore
With a mansion as the backdrop off busy Rockville Pike, families relax together at free shows with a community feel.
See now: Ukelele Festival on Aug. 19
Performers from Hawaii to the mainland play this annual festival headlined by locally based childrens’ and folk artists Marcy Marxer and Cathy Fink. This free concert is the last of the Strathmore summer concerts and well-attended, so fans of this little instrument are cautioned to come early and bring your uke!
See later: Next summer’s Backyard Theater for Children, a weekday morning series in June and July that welcomes a range of performing artists dedicated to their young audiences.

Takoma Park Gazebo
Set on a still leafy street in burgeoning Takoma Park’s downtown, the Town Gazebo is a great gathering spot for family and friends.
See now: Furia Flamenco on Aug. 7
Takoma Park, Md. takes the “Main Street” concept and flips it a little on its side with an eclectic array of events derived from anywhere but the heartland, taking place at the gazebo where little ones are sure to be fascinated by performances from groups like the Spanish dance troupe Furia Flamenco.
See later: Marimba Concert on Aug. 29 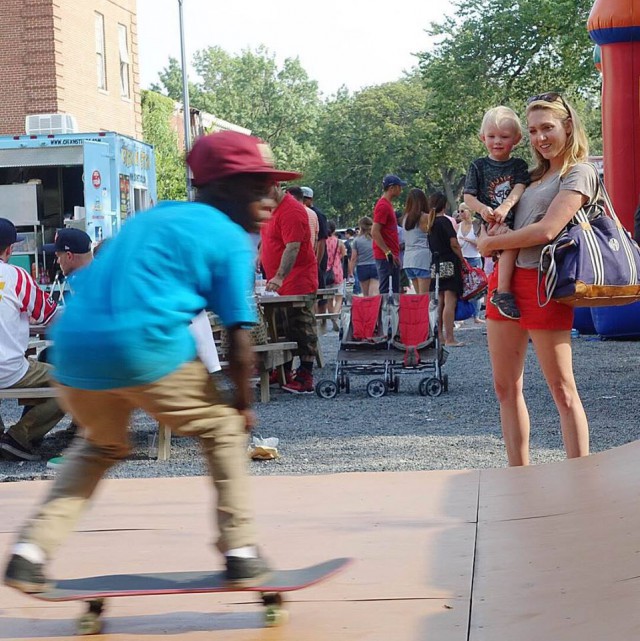 Kennedy Center
No longer just a showcase for adults-only performances, this marble memorial on the Potomac, is now a dynamic go-to place for families offering everything from kids- only concerts by members of the National Symphony Orchestra to free shows in the lobby.
See now: Finding a Line: Skateboarding, Music, and Media on Sept. 11 and 12
Skateboarding for some is like poetry in motion, and in this unique performance, live musicians join with daredevil skaters on the Kennedy Center’s outdoor plaza to shred a ramp and fuse together two art forms you never thought you and your teenager could both appreciate.
See later: A full calender of Performances for Young Audiences this Fall, and a continuing calendar of free Millenium Stage performances.

National Air and Space Museum
Take kiddo to the moon and back at the Smithsonian’s Air and Space Museum Summer Concert Series on three Fridays in August with musicians in uniform from the U.S. Navy, Air Force and Army.
See now: U.S. Navy Band Brass Quintet and Saxophone Quartet on Aug. 14
Introduce your budding trumpeter to the big sounds of brass horns or the saxophone with a 20 minute concert that rewards his short attention span and gives you a reason to smile on the hour from 11 am to 2 pm.
See later: Army Field Band’s Six String Soldiers on Aug. 30, 5 pm at the museum’s Udvar-Hazy Center location
Online: airandspace.si.edu
What is your favorite family-friendly performance venue? Tell us in the comments below.