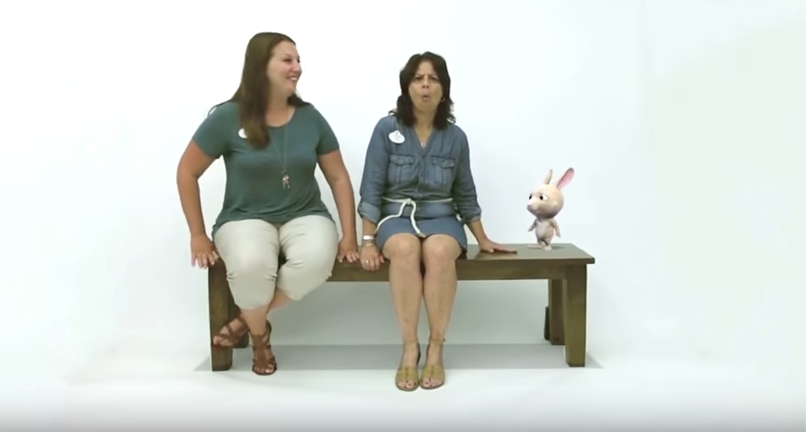 The idea of virtual reality may be intriguing — but so far it still requires a clunky headset or handheld device to partake. But leave it to Disney to develop a sort of VR that doesn’t require a thing.

The Magic Bench, a new feature currently under development by Disney Research, creates an experience where people will actually feel like they’re sitting next to a cartoon. For example, you’ll feel your seat thump as an adorable elephant plops down next to you on a bench — and while you may not see it happen in the real world, it’ll be plain as day on screen.

“One of the compelling ideas behind mixed reality is the ability to share the same space as an animated character,” Disney principal digital artist Mo Mahler said in a video for the Magic Bench.

Here’s how it works: users sit down on the Magic Bench facing a screen display where they can see their mirrored image. Beneath the screen, a camera and depth-sensing device captures the user’s dimensions and location on the bench to subsequently create an experience to correspond perfectly with their movements.

“Our mantra for this project was: hear a character coming, see them enter the space and feel them sit next to you,” Mahler continued.

To make the experience feel real as real as it looks, the bench itself has its own technology that sends vibrations into the seat so that the users can feel the characters sitting beside them. So, for example, if the aforementioned elephant starts to snore (as he will), users will feel the bench vibrate with each noisy breath. If it starts to rain on screen (as it might), users will feel the raindrops plunking down all around them. The bench also generates “experiences” based on how many people are sitting on it and what direction they’re looking.

There’s no saying where Disney will put its magical benches, but we can’t wait to try them out.

Are you excited to experience this new kind of virtual reality? Tell us your thoughts in the comments below.