Dolphins are arguably some of the most intelligent animals in the world. They use tools, help their sick, play games and have a complex language all their own. Read on for 10 cool facts about these fascinating aquatic creatures. 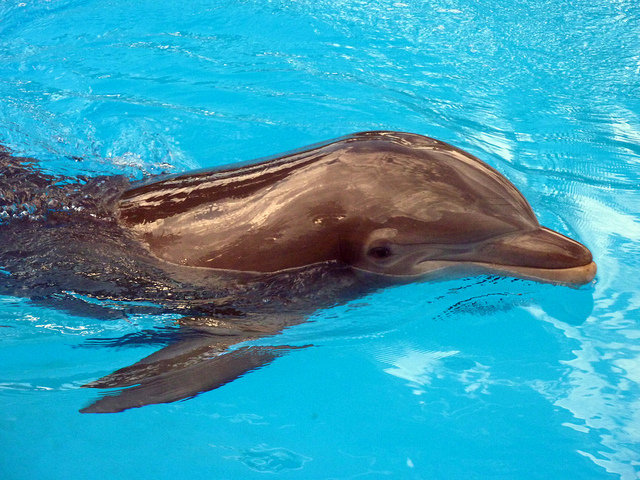 1. Dolphins have been seen wrapping sea sponge around their long snouts to protect them from cuts while foraging for food. They even teach their young this tool-using technique.

2. Each dolphin has its own signature whistle. They communicate using an exchange of clicks, whistles and squeaks. They can make up to 1000 clicking noises per second!

3. The Killer Whale (Orca) is actually a type of dolphin.

4. Dolphins use echolocation: they use sound to determine the distance and location of objects, food and one another. Some dolphins have excellent eyesight, but many, including the river dolphins, have poor sight and rely on echolocation to help them navigate and hunt.

5. The Amazon and Orinico Rivers are home to pink river dolphins. These are the largest freshwater dolphin in the world and really are pale pink in color.

7. Only half of the dolphin’s brain goes to sleep when asleep and the other half stays awake.

8. Baby and young dolphins rest, eat and sleep while the mother swims. The mother doesn’t stop swimming for the first several weeks of a newborn’s life, in order to keep the baby afloat. (So dolphin moms are sleep deprived too!)

9. Dolphins have been seen helping a sick or injured member of their pod to the surface of the water.

10. They breathe through nostrils on top of their heads, also known as blowholes. While time varies greatly from species to species and is dependent on the activity, the average dolphin needs to 8-12 breathes per minute if active, and about 3 when less so.

Know any cool facts about dolphins? Share with us in the comments below.