Before we had hand-held electronics, we had other toys to keep our hands and our minds busy. Sitting in the backseat of the car, many kids played with water arcade games or magnetic drawing boards. In honor of their 60th anniversary, Etch A Sketch has teamed up with other iconic names to unveil a series of limited edition launches.

For 2020, the Etch A Sketch brand is joining forces with the beloved MONOPOLY brand, space exploration leader NASA, heritage toy Rubik’s and comic book marvel Stan Lee. Each will have their own limited-edition Etch A Sketch® drawing toys, merging two iconic worlds into one magic, shake-to-erase collector’s item.

“The Etch A Sketch drawing toy is one of only a handful of breakthrough toys that’s popularity spans generations,” says Arlene Biran, VP of Marketing for Activities and Building Sets, Spin Master. “It is a timeless toy that encourages creativity on a magic screen that doesn’t need WIFI. Our series of limited-edition collaborations with other inspiring and imaginative classics honors 60 years of unplugged creativity.”

“We’re thrilled to work with the team at Spin Master to bring the Etch A Sketch MONOPOLY Edition to market,” said Casey Collins, GM & SVP of Entertainment and Licensing at Hasbro. “As we honor major milestones for both brands this year, we hope fans of all ages will treasure this release for years to come.”

The Etch A Sketch limited edition collaborations will be released in limited quantities throughout the year on EtchASketch.com as well on Etch A Sketch Day, July 12, 2020, marking the official day the first Etch A Sketch toy was sold. 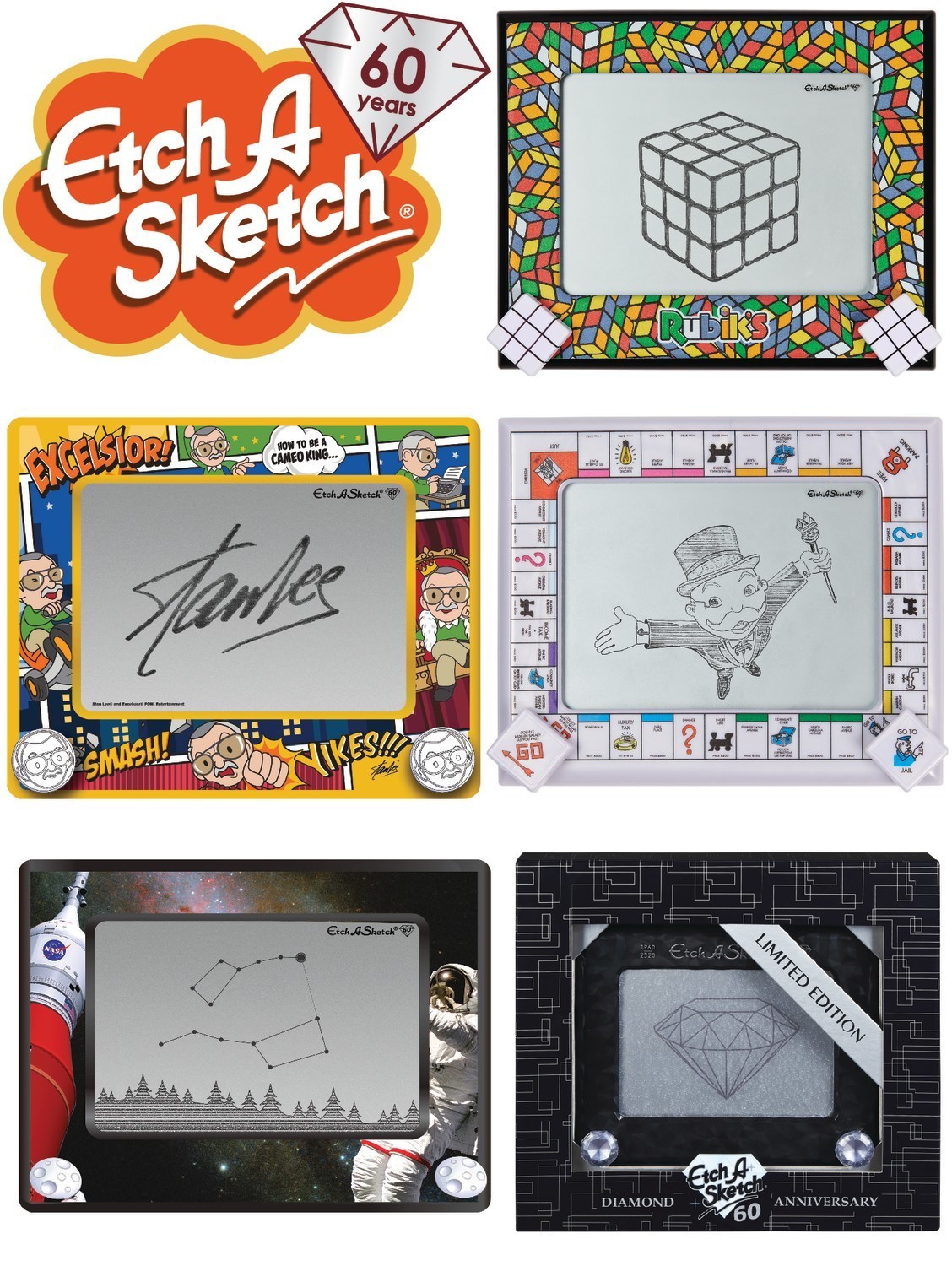 The Etch A Sketch® Brand draws in the classics with a series of limited edition collaborations to mark the 60th anniversary year. (CNW Group/Spin Master)

As the classic board game celebrates an 85-year milestone, pass go and collect a limited-edition MONOPOLY-inspired Etch a Sketch.

And after 60 years here on earth, we’re looking to space to encourage a new generation of creative explorers with the NASA-inspired Etch a Sketch. Because even the biggest space shuttles, started with a simple sketch.

With a cumulative age surpassing 100, worlds will collide with an Etch a Sketch inspired by the mind-bending heritage toy that has become a household name.

Out-of-this-world storytelling merges with the original magic screen inspired by the superhero of creativity who co-created such iconic characters as Spider-Man™, Iron Man™, X-Men™, and many more.

In addition to the collaborations with iconic classics, Spin Master is unveiling a new limited-edition Diamond Edition Etch a Sketch featuring a sleek black frame and custom crystal knobs available in limited quantities on EtchASketch.com. The company will also release new innovation with Etch a Sketch Revolution in August. This will be the first Etch A Sketch with a spinning screen that allows you to make circles.

22 Genius (& Screen-Free) Activities for the Car

These TGIF Faves May Bring ’90s Nostalgia Back