If you’ve been to Disneyland’s California Adventure in the past six months or so, you’ve probably noticed the scramble of construction happening at the hulking 12-story building that was the Twilight Zone Tower of Terror ride. Now, after a reported $100 million renovation, the tower re-opened Memorial Day Weekend as Guardians of the Galaxy: Mission Breakout! Got little Terrans (that’s Guardian-speak for Earthlings) who might want to hop aboard this ride that is scarier and more fun than ever? Here’s what you need to know: 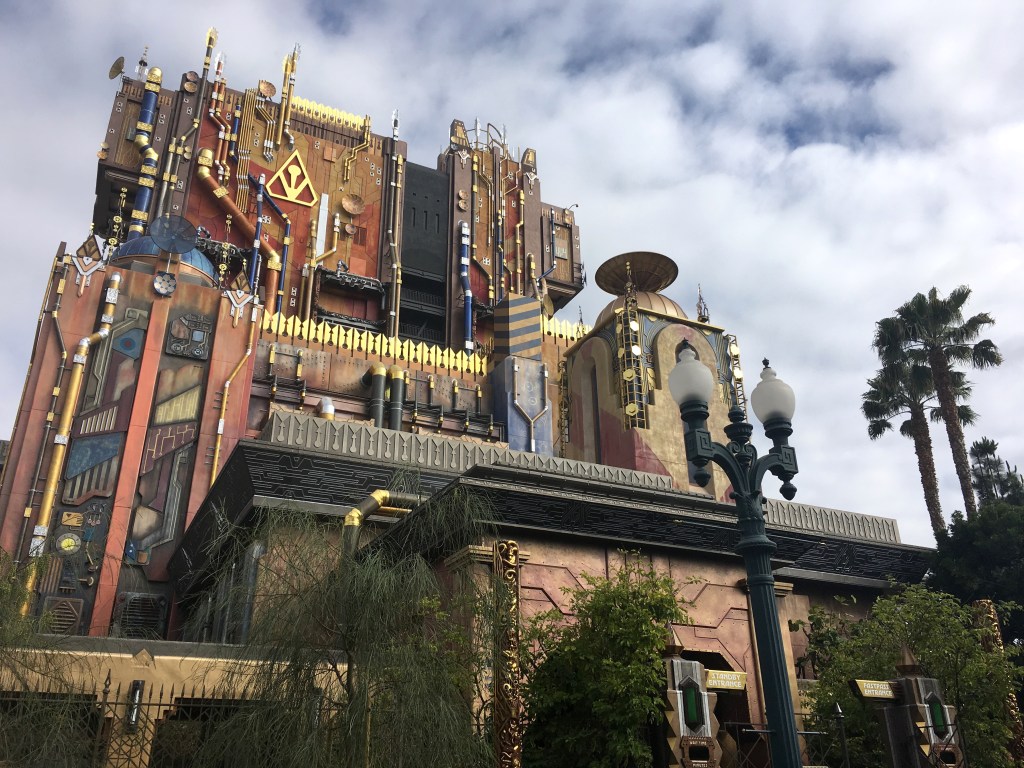 This is What You’re Walking Into
As soon as you step through the doors of the cartoonish sci-fi-esque tower that houses the Guardians ride, you’ve become a part of the story. You’re there because you’re guests of The Collector (played in the films by a gleefully villainous Benicio Del Toro), who wants to give you a “gantry lift” tour of his vast collection of intergalactic artifacts. His latest and most prized acquisition is, of course, the Guardians of the Galaxy themselves, whom he has caged inside floating glass boxes inside his fortress.

After weaving your way through the bowels of the building, which is filled with various caged alien relics (see below), you’ll be ushered inside the Collector’s Office. That’s when an impressive animatronic Rocket (the film’s smart-talking raccoon) breaks in to tell you that he’s going to free the Guardians and needs YOUR help to do it. He just needs to hitch a ride on top of your elevator car, pull the power, and…

So starts the chaos.

Once seated aboard your lift, you’ll see snippets of a plot blasting on giant screens for a few seconds between each plunge. But honestly, it’s hard to pay attention; mostly you’ll be hanging onto your seats and hoping you don’t lose your lunch (don’t eat beforehand!) and that your kids aren’t too freaked out. 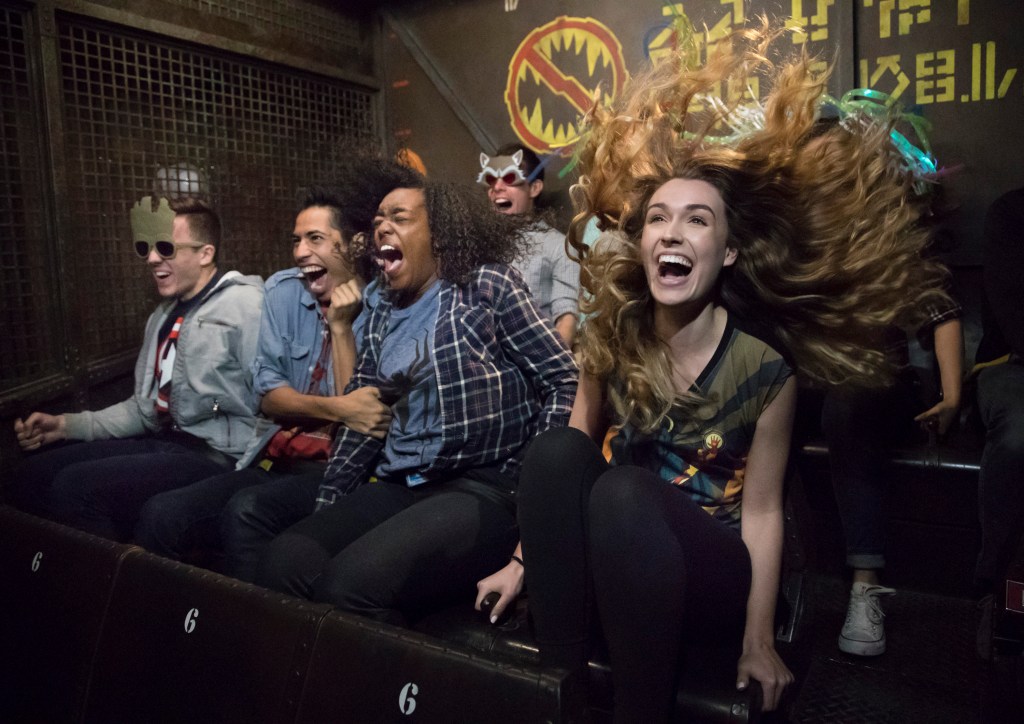 It’s Still Scary (But Maybe More Fun)
Kids who thought the Tower of Terror was terrifying won’t find much reprieve in the latest incarnation of the ride. Mission Breakout! is still, at its base, an in-the-dark drop ride, so kids who don’t like total darkness or hang-on-to-your-stuff descents (and ascents) won’t be too happy with the frenetic two-minute experience. But older kids (and grown-ups) seeking an adrenaline rush will love everything about it. Unlike Tower of Terror, which took riders on a gradual ascent before getting to the thrills, Mission Breakout! shoots riders up like a rocket (or like Rocket?), right from the start. Riders will feel several moments of out-of-your-seat weightlessness as their elevator car barrels up and down so fast that Mom and Dad will be screaming right alongside their little ones.

That said, the ride (like the film) doesn’t take itself too seriously. For one, the whole thing is set to rockin’ music, with six versions of the ride set to different tracks, including Pat Benatar’s “Hit Me With Your Best Shot”and the Jackson 5’s “I Want You Back.” Where Tower of Terror created a creepy horror movie sort of vibe, Guardians cultivates an infectious camaraderie inside the elevator car as the whole lot of riders gets shot up and down like a bouncy ball.

Got Tiny Tots? Kids can ride as long as they’re at least 40 inches tall, but we think the ride is best suited for kids ages 8 & up and those kids who are comfortable with fast rides and the dark. There is a child-switch area if one parent wants to take turns staying with a small child while the other rides the ride. 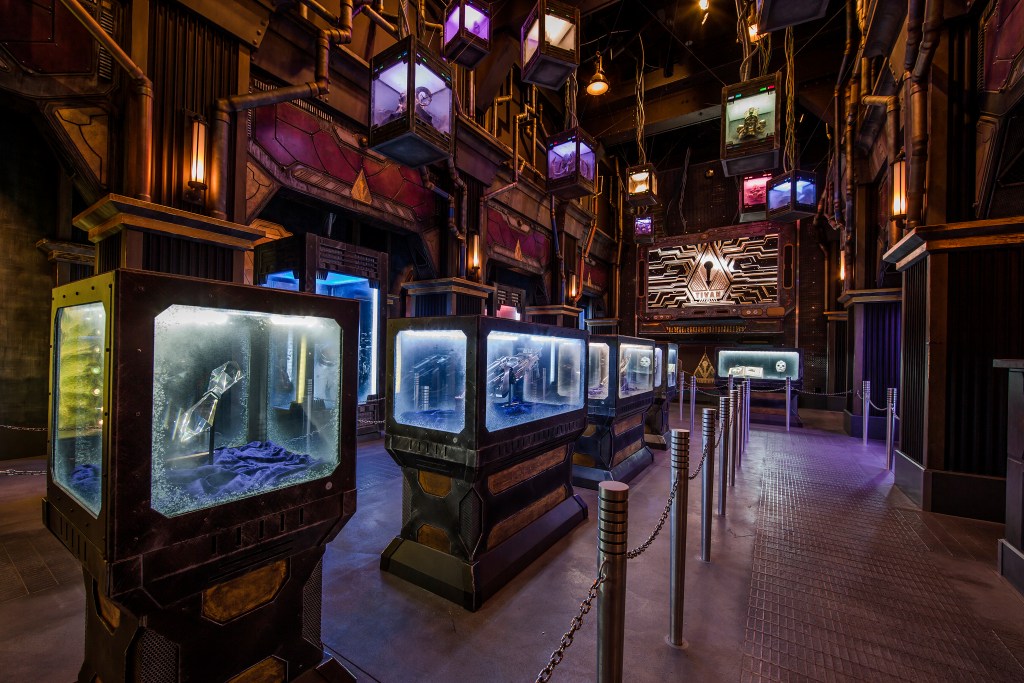 It’s Packed With Marvel-ous Details
Since lines for Mission Breakout! are sure to be long (at least an hour or more on weekends), it helps that it’s an interesting wait. There’s plenty to look at as you’re weaving your way through the fortress, including a ridiculously lifelike cosmonaut dog and some fun call-outs to other Disney/Marvel movies. See if your tots can spot any of these items: 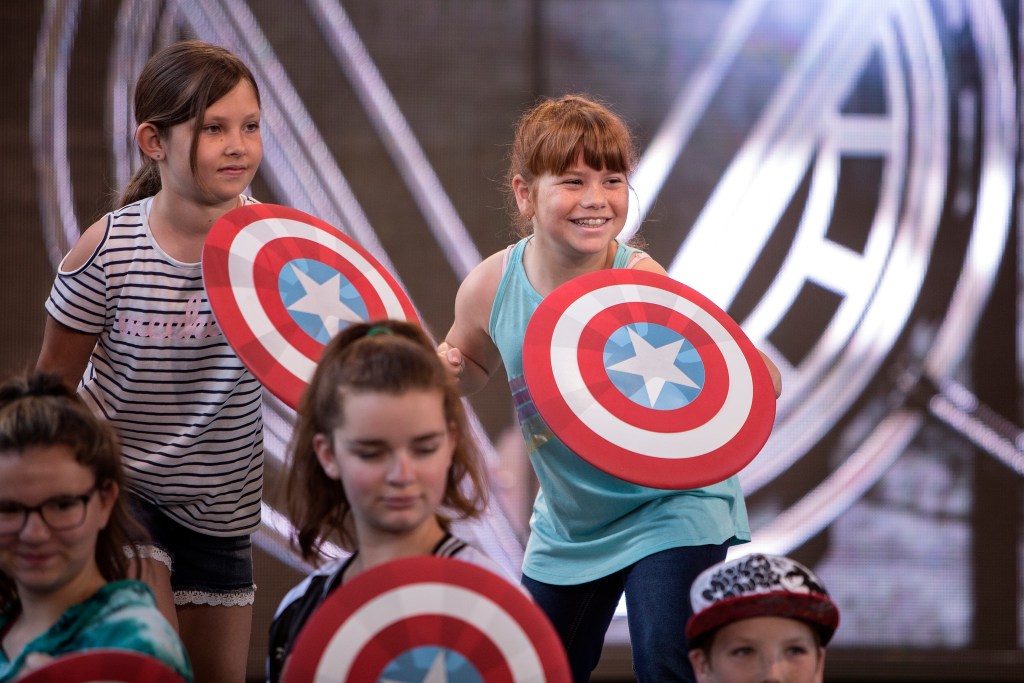 Heroic Encounters—Little superheroes will love seeing some of their favorite Marvel characters up close and personal, so be on the lookout for meet-and-greets with Captain America, Spider-Man, and Guardian‘s Groot.

Avengers Training Initiative—An interactive kids’ show (similar to the Jedi Training Academy at Disneyland) that lets kids test out their superhero skills. Several times throughout the day, Black Widow and Hawkeye will assemble young recruits for a series of tests to see if they have what it takes to join the ranks of the Avengers.

So even kids too timid to take the ride can have plenty of super-sized superhero fun! 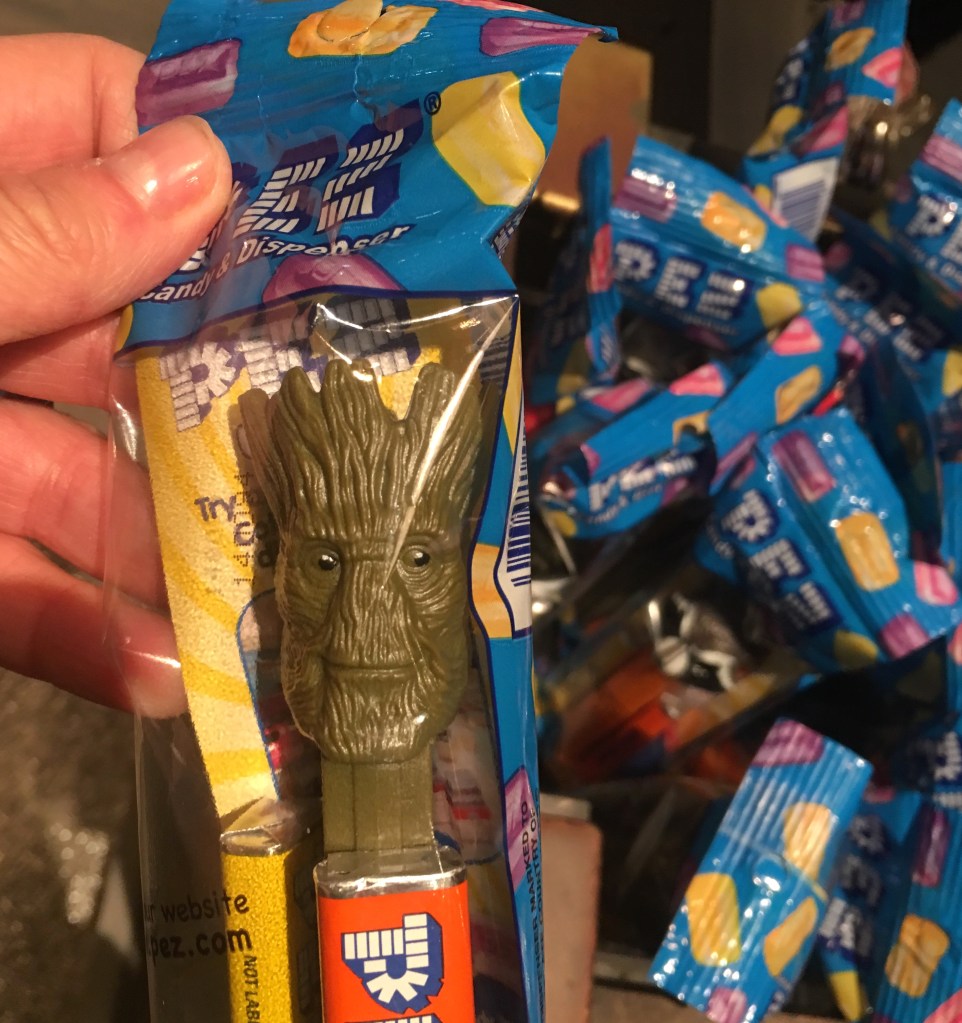 It’s a New Galaxy of Goodies
No good Disney ride would be complete without a stocked-to-the-brim store at the ride’s exit. Want a Groot Pez dispenser? You got it! A few Guardians dolls or figurines? But of course! Your kids may not have seen the movie, but they’ll want something from it, just the same.

If you’re hungry for some intergalactic eats, there’s also a whole new slew of limited-edition treats, including:

Groot Bread—These Sourdough loaves shaped to look like Groot are almost too adorable to eat. (Available at the Fairfax Market in California Adventure’s Hollywood Land).

The Most Dangerous Tacos in the Galaxy—Get your Gamora-green tacos at Knowhere Eats, a new Mexican-inspired eatery inside California Adventure (opens June 6). 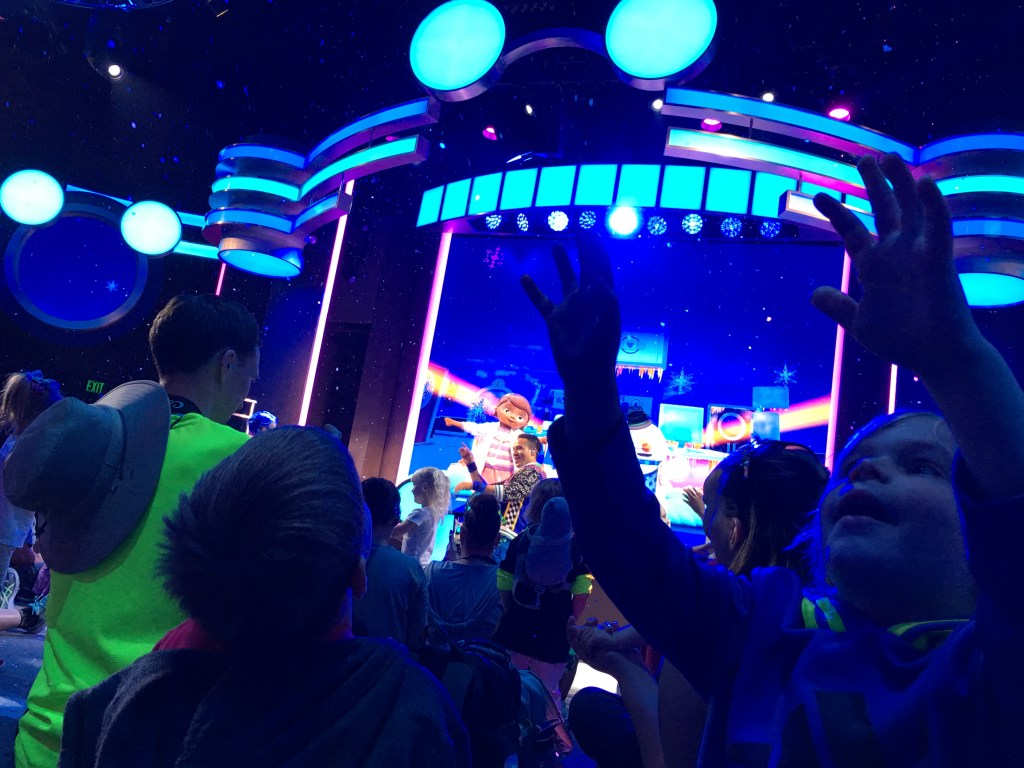 It’s Not All That’s New
When they’re done socializing with superheroes, stroll down the streets of Hollywood Land to the Disney Junior Theater and check out the all new “Dance Party!” show (it’s designed for preschoolers, so older kids may want to skip it). Your kids will get some serious wiggles out at the 18-minute show, which lets the littles stand up and boogie to familiar tunes along with Mickey and the Roadsters, Sophia the First and Doc McStuffins. Bubbles will be blown, snow will fall, confetti will fly. And kids will love it.

Hint: The show has some fun audience participation moments, so if your kids want to be picked, sit in the front row!

What’s your favorite California Adventure attraction? Tell us in the comments section below!