Get your Garbage Pail Kids trading cards out. Now, you can play with all of your favorite characters again. In honor of GPK’s 35th anniversary, usaopoly (The Op) is teaming up with Topps to release Monopoly: Garbage Pail Kids. 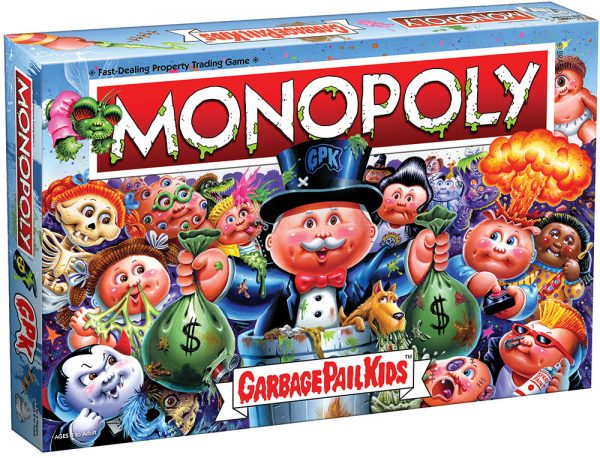 “As long-time fans of Garbage Pail Kids, we are excited that other fans of this pop-culture classic will be able to immerse themselves in, and enjoy, the iconic tabletop Monopoly game play experience,” says Maggie Matthews (aka Haggy Maggie in Garbage Pail Kids-speak), The Op’s SVP of Licensing.

Players will vie to collect iconic characters such as Adam Bomb and Leaky Lindsay. Navigate the game board with one of six collectible movers such as an Overflowing Garbage Can, Swirly Dog Poop or Zit Goo Tube.

“When Topps first published the Garbage Pail Kids cards and stickers in the 80’s and 90’s, it spawned a worldwide collecting phenomenon,” says Ira Friedman (aka IncrudibleIra), Topps VP of Global Licensing. “Today, many of those young fans are nostalgically reliving childhood memories and reconnecting with the brand. They’re going to get a kick out of this bold mashup between GPK and Monopoly.”

MONOPOLY: Garbage Pail Kids will be available throughout North America in specialty stores this spring, retailing for $39.99.