This Golden Retriever Just Had a Green Puppy 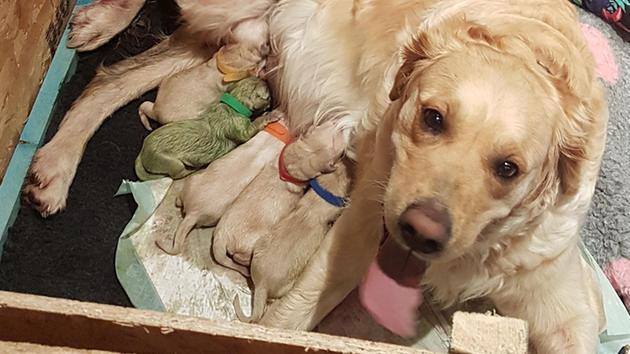 A golden retriever recently became the proud mama to eight yellow little pups — and one green one.

For three-year-old Rio the dog’s labor and delivery went smoothly, but when all was said and done, Rio’s owner Louise Sutherland of Scotland was shocked to see that one of the wriggly little newborns had mint-green fur.

The green hue was apparently caused by a bile pigment found in the mother’s placenta that can stain the puppy’s coat when it mixes with amniotic fluid, according to an article in The Scottish Sun. The article reported the occurrence to be an “extremely rare occurrence which is thought to have happened only three times before in the world,” though a Golden retriever breeder we spoke with said it happens frequently.

“It was all hands on deck but then as the puppies started to arrive, we noticed that one of the puppies had green fur. We couldn’t believe it,” Sutherland told reporters. “The color has faded quite a bit already and will be gone soon, I’m told.”

Quite fittingly, Sutherland named the pup Forest (though we would have gone with Elphaba).

Do you have another name for this pup? Tell us in the comments below.