National Eat Your Vegetable Day is June 17 and broccoli is the most popular veggie in the U.S., according to a new survey from Green Giant. Believe it or not, every person who picked it said the taste was the top factor!

Regionally there are some disagreements. The East Coast prefers broccoli, but the West Coast leans in favor of carrots. Unsurprisingly, corn is the king of many Midwest states. But every state picked one of those three vegetables as the best, pushing aside past favorites that included tomatoes and cucumber. 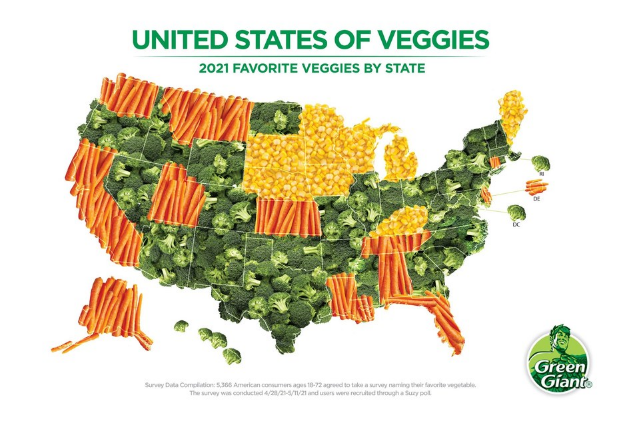 Also unsurprisingly, small children were not included in this survey. Green Giant collected data from more than 5,000 Americans over the age of 18. There would likely be even more disagreement among kids and we predict that green smoothies would be a top contender.

Thankfully Green Giant has an array of options for the veggie-averse members of your family. Cauliflower pizza crust, riced veggies, veggie tots and spirals, all frozen for easy side options! Feel free to conduct your own informal survey with your family—with a side of broccoli of course—to mark this week’s holiday.

How Many Fruits & Veggies Should You Eat in a Day? New Research Has Answers