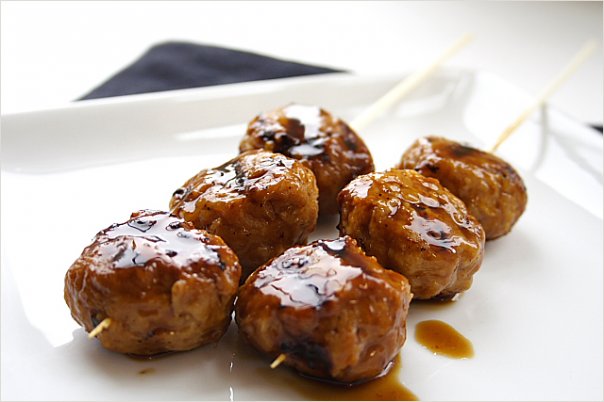 Chef Brendan Collins, the man behind Waterloo & City in Culver City and Larry’s in Venice, knows exactly what kids like to eat. While his fine dining establishments are all about adult-fare, his daughter Saffy doesn’t need anything fancy for her dinners. In fact, this recipe, which he calls “Yeah She Isn’t a Vegetarian” Grilled Chicken Meatballs is one of Saffy’s (and Chef Collins’) favorites. He wanted to share his recipe for grilled chicken meatballs with other parents so they can integrate a new, very easy, and Michelin-starred chef approved recipe to their dinner rotation.

Method:
1. Put all the ingredients for the chicken balls (except the ginger) in a food processor and blend well.

2. Wet your hands and scoop about a tablespoonful of the mixture into your palm. Shape it into a small ball about half the size of a ping pong ball.( my daughter loves this part although quite messy well worth the effort)

3. Squeeze the juice from the grated ginger into a small mixing bowl. Discard the pulp.

4. Add the ginger juice to a small pan of boiling water. Add the chicken balls and boil for 5 minutes, or until the color of the meat changes and the balls float to the surface. Scoop out with a slotted spoon and drain on a plate and refrigerate.

6. Thread 3-4 balls on to each bamboo skewer. Grill the skewers with an indoor hibachi grill or broiler. Brush them with the robata sauce and turn the skewers frequently until the balls turn brown.

7. Serve and sprinkle with shichimi togarashi (optional) and some yakitori sauce if you like. (Get ready to do the synchronized blowing act )

If you’re interested in hearing more about Chef Collins including the food he can’t live without, what his family ate for dinner last night, and his daughter Saffy’s favorite things to munch on then click here for the full interview with the notable chef.

Chef Brendan Collins is the Executive Chef and founder of Larry’s Venice and Waterloo & City in Culver City. England-native Collins has worked in a variety of Michelin-starred establishments throughout London and Los Angeles during his acclaimed career. Chef Collins currently resides in Los Angeles with his wife Eden Rountree Collins and their daughter Saffron Rose Collins.