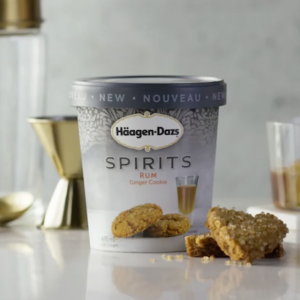 Ice cream? Or cocktails? Now you don’t have to choose! Häagen-Dazs just released a new line of ice cream that’s infused with alcohol, so that you can binge and get buzzed at the same time (just keep this stuff away from the kiddos).

The bad news? It’s only sold at Walmart stores in Canada. There’s no word on when Häagen-Dazs will release the new concoction in the states, but for the sake of parents who’d love a few sips, err, bites of the stuff while their kids are going bonkers after dinner, we hope it’s soon!

In the meantime, we Americans aren’t completely boozy ice cream-free. After all, New Yorkers have Tipsy Scoop (which ships anywhere in the U.S.), Las Vegas has Momenti Spirits (“spirited ice creams and sorbets”) and Los Angeles has SnöBar (where there’s “a full cocktail in every serving”).

Just go ahead and explain to your kids why you need to Uber it to the ice cream shop. They should know.

Or, don’t drive anywhere and make your own chilly spirits at home: Here are some yummy-looking recipes for alcoholic ice cream from Liquor.com.

Have you tried alcohol-infused ice cream? Did you like the taste? Tell us in the comments below.