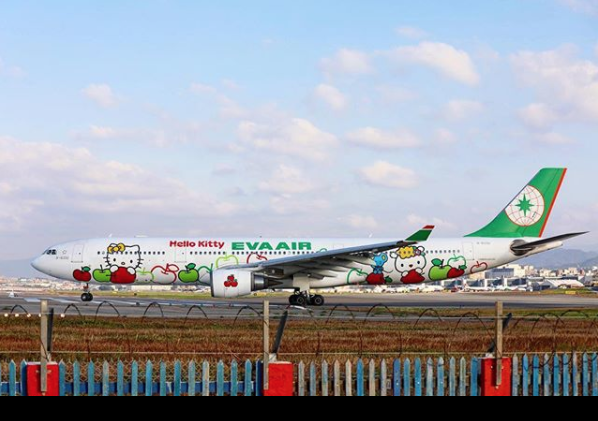 If you thought all hope was lost that something totally adorable would happen to the airline industry, then you clearly don’t know about this Taiwanese airline that offers “Hello Kitty” aircraft on select routes, including flights in and out of some U.S. cities!

That’s right: You can now take to the skies in the cutest airplane ever made.

Eva Airlines, a Taiwanese airline that flies between Asia and more than 40 international locations, offers among its fleet a select group of Hello Kitty-themed planes that are as adorable on the inside as their cartooned exteriors might suggest. From the moment you get your Hello Kitty imprinted ticket, you’re in for it: we’re talking everything, from Hello Kitty seat pillows and head rest covers to Hello Kitty toilet paper and cutlery. Just take a look at some of these Instagram posts:

Even the meals and flight attendant outfits are cute.

Besides the smorgasbord of cuteness, the planes also have other awesome amenities including an in-seat audio/video on-demand system that, (along with Hello Kitty programs and other, more varied, programming) allows passengers to attach their devices to browse photos and listen to their favorite music.

Eva Air has had Hello Kitty-themed planes since 2005, but has ratcheted up production and route options in the past several years. It now offers flights in and out of six U.S. cities, including Chicago, Los Angeles, Houston, New York, San Francisco and Seattle.

We’re sold — anyone up for a trip to Taiwan?

Have you ever flown on a Hello Kitty flight? Tell us about it (and show us pictures!) in the comments below.