If your kiddos just can’t decide which cereal is their fave, they no longer need to pick one over the other. Kellogg’s is bringing breakfast fans two cereals—in one! 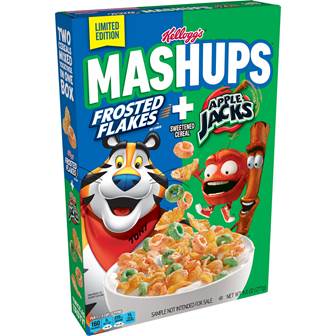 The green and red-hued fruit-flavored cinnamon-y Apple Jacks are sprinkled throughout the sweet, sweet Frosted Flakes. The Frosted Flakes-Apple Jacks Mashup isn’t the first mixed up batch of breakfast cereal Kellogg’s has created. Last summer the brand paired Frosted Flakes with Fruit Loops. It looks like the success of the first cereal combo creation has spawned yet another tasty blended treat with a summer-time release.

Look for Kellogg’s Mashups Frosted Flakes and Apple Jacks in cereal aisles nationwide starting June 2021! Score this limited-timed cereal blend for the suggested retail price of $3.99 (for a 9.8 ounce box) or $5.69 (for a 15.6 ounce box).