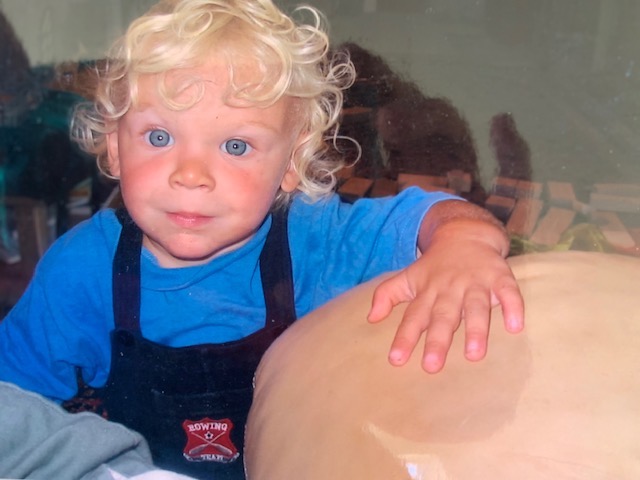 Writing about Oakley is complicated. I am choosing to share these stories because I believe that sharing the messy parts of our lives is important. We tend not to talk about money or mental health or our big fears—and I think this can lead to confusion, lost opportunities for understanding and isolation. So, I tend to be a blabbermouth.

When Oakley was young, there were times that I felt alone in our experience. We often couldn’t participate in activities with other families. No story hour, no children’s museum, no zoos (he once literally climbed in the cage of a huge elk stag and I couldn’t coax him out) and no dinners at friends’ houses. He would create mayhem wherever we went and it was too exhausting. I remember walking down the parenting aisle in the library looking for books that might help normalize what we were going through, but I was never terribly successful.

This blog isn’t a “tell-all” account of our lives. I am trying to respect Oakley’s privacy and will always run these stories by him. But I am hoping that by exposing our challenges and triumphs, someone reading this might feel like they have kindred spirits and that might make their journey a little easier.

This is Oakley’s story.

“What makes you think there is a problem?” asks the pediatric developmental specialist.

Oakley is one and a half years old. He is as cute as they come, with white-blond hair hanging in ringlets down to his shoulders and blue-green orb-like eyes. He is sitting on my lap straddling my legs and facing me, playing with the zipper on my fleece jacket as I speak with the doctor. He zips it up. He zips it down. Again. And again. And again—50 times, 100 times.

Oakley was an exuberant puzzle of a child and he still is. He is my fourth child and I thought that I had a handle on the parenting thing until he came along. He seemed plucked from outer space and put in my arms with a wink from fate, as if Oakley was the punch line in a wonderful joke. That was the look that he had on his face from the day he came to us. “Watch me! I will make you laugh and cry at the same time! It is a special trick.” And then he would devilishly grin.

He was terribly naughty. He had pica—a disorder in which you are driven to eat non-food items and would eat everything he found. Toothpaste, shaving cream, dog food, sand, flowers and even mud. He would lock himself in the bathroom and feast on whatever he could find. We had poison control on speed dial and I remember asking them shakily after what seemed like the thirtieth call if they kept a record of the calls. The answer is yes.

In a way, it was probably fortunate that he had Pika because of another issue. Oakley was severely asthmatic. He was given the nickname Hufflepuff early on because you could hear his steam-engine-like breathing from 50 feet away. We set up his nebulizer next to a tiny rocking chair and he would inhale his vaporized asthma medication through an oxygen mask while rocking maniacally back and forth, like Dennis Hopper in Blue Velvet.  He would be grinning and drooling as he huffed away, completely unfazed, but others who heard him were always aghast.

Twice one of his lungs collapsed. In the process of attempting to find out whether his allergies were the cause of his asthma, he was put on a combination of goat milk, fish oil and several supplements that are normally given in gel capsules, but which we would painstakingly slice open and pour into his potion. You have never tasted anything so vile. He loved it.

In an effort to reign in his hyperactivity and impulsivity, we turned to intensive occupational therapy. He was prescribed several sensory diets from various professionals. Treatments included wrapping him in a sheet and swinging him in what looked like a cocoon hammock, wearing a weighted vest, sleeping with a weighted blanket, listening with huge globular headphones to deep-bass, rhythmic beats as he went about his day, having him wear a sombrero and sunglasses to reduce stimulation, smushing him under couch cushions, encouraging him to drink oatmeal like substances through a straw to stimulate certain pressure points in his jaw, massage with and without brushing, jumping on trampolines and hugging him, a lot.

He continued to run away constantly. Not little, cute running away, but serious, “Where-the-hell-is-he??” running away. We kept our doors locked from the inside and spring loaded. We locked his bedroom door at night from the outside, but still, the clever rascal would see every opportunity and take it. He wore a medical ID bracelet with his name and address in case he was found by someone else. He wore an alarmed harness that we could activate if he wandered off. But still, despite our best efforts and because a girl has to go to the bathroom or has to pay attention to another child, he would get away.

On his walkabouts—as we came to call them—he would get into many dangerous situations. I found him one day methodically visiting every garage in the neighborhood and pouring cans of gasoline all over lawnmowers and the floors. ( I never told anybody because I was so embarrassed. I simply grabbed him and ran home. I still feel guilty about this.) I caught him chest deep in a pond in South Carolina that was inhabited by alligators, while chaperoning my other son’s field trip. (I was asked to no longer sign up for this responsibility.)

I found him sitting in strangers’ cars and pretending to drive with the doors locked, grinning wildly. We found him locked inside a port-a-potty, unrolling all the toilet paper to make a big white nest, his belly laughter echoing off the inner walls. We begged and pleaded with him to come out while a line of people wanting to use it formed outside, none of them very impressed by our parenting.

He ran away from his nursery school and into a swarm of bees. His teacher reported to me that she was secretly glad it happened, as she thought it might make him think twice before he ran away again. It was the lesser of potentially bad consequences. I found him on the roof, having climbed up and out of our fenced-in yard. It never ended.

He also lied. Told stretchers. He told his nursery school teacher that he had found a dead body in his room (“blood all over”), but that his mother had cleaned up the mess. He blamed every naughty thing on his imaginary friend “Somebody.” Somebody covered the inside of the car in permanent marker. Somebody set the mice free. Somebody emptied all the spices on the floor. He told his friends it was his birthday when it wasn’t and reaped the benefits with delight.

Not only was Oakley a danger to himself, he had rage. That was not fun. He would not let us change his diaper unless we pinned him to the floor with our knees. He wouldn’t let us get him dressed and when we did he would just tear off his clothes, so he spent much of his time naked. He would tantrum in public on a level comparable to the Tasmanian Devil.

There were many days that Twain and I were overwhelmed and would declare that our lifest‌yle was not sustainable. But we were in love with him. So we kept chasing him when he ran away and today he still loves adventure. We kept those headphones with the rhythmic beats on him and today he loves drumming. We bought him a full-size trampoline at three-years-old despite potential risks and today, he still jumps and twists and flips and has an incredible kinesthetic ability. I think the hugging helped, but that is not as measurable.

I am not saying we were award-winning parents. I became a yeller and one could literally watch Twain recede into his own world when it all became too much. Today, we still can’t leave Oakley home alone because he is still overly impulsive and has a tendency towards the naughty. He still tells stretchers. Life with him is like playing a never-ending game of “Two Truths and a Lie.” He still has the need for constant stimulation and loves risky activities. He still has rage, but only towards his parents when we try to set limits. Some things haven’t changed.

His story isn’t over and we are constantly having to troubleshoot how to navigate life with a guy like him, so that all his traits can be strengths, not liabilities. That is part of the impulse behind this bike ride. That and, conveniently, it is something that I have always wanted to do. Lucky me.

ABOUT THE WRITER Leah Day
Bikemum

Beginning in August 2019, my son Oakley and I will cycle across America over the course of three months. Oakley is a spirited 15-year-old boy who has always struggled to fit into the confines of mainstream culture. I am Leah, his mother—and we are ready for adventure.
MORE FROM Leah:
Letting Oakley Lead, The Joy in Irresponsibility, Good People
Red Tricycle > Spoke Contributor Network > Real Talk > Knowing When to Let My Son Take the Lead Has Never Been Easy