The end of an era is almost here with Disney Pixar’s forthcoming Toy Story 4 due out this summer. So far we already know that the fourth installment of the iconic animated Disney flick comes with at least three new characters: Tony Hale’s Forky, Keegan-Michael Key’s Ducky and Jordan Peel’s Bunny. If you’re looking for more info than the teaser trailers provide, these new LEGO Toy Story sets might have some answers.

Even though the film won’t hit theaters until Jun. 21, you can score these awesome building sets this April.

The trailer already teased that Toy Story 4 would take us to the carnival and this set confirms it. The 230-piece ($49.99) includes all kinds of fair fare, including new character Minifigures, Ducky and Bunny.

Your kiddo's best Toy Story friends are headed out of town—and it looks like we might get a hint at how they end up at the carnival. Pack the gang up and get RV-ing with this set for children ages four and older. The 178-piece set will sell for $34.99.

The second carnival set in this new line includes all kinds of coaster fun. Kids four and up can can speed around the bends with all 98 plastic bricks of this Toy Story set ($19.99). 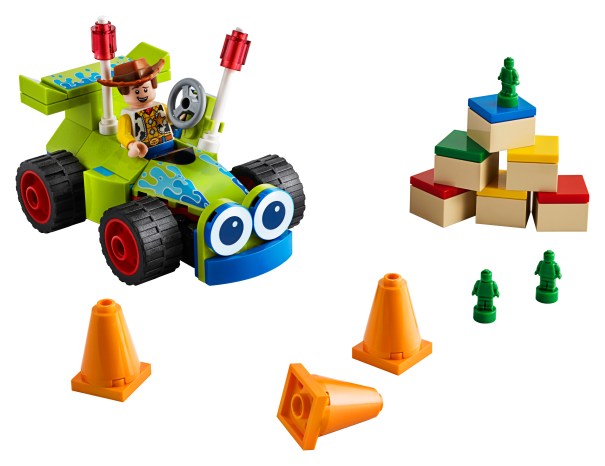 Woody gets behind the wheel with this supercharged set. Set up cones, knock down blocks or just drive this character fave around. The 69-piece set (which comes with a Woody Minifigure) is  for kids ages four and up and will retail for $9.99.