Ride, Baby, Ride: Spend a Day on the Red Line

In LA, driving is as necessary as breathing (and sushi). But imagine having a whole day where your family could leave the car (and gargantuan car seat) behind with nary a 10, 405 or 101 in sight – while still being able to explore the coolest locales. The Metro Rail’s at your service and is an adventure in itself – with all the speeding trains, impromptu platform musical performances and the interesting passenger next to you who’s arguing with his hat (wait, that’s your toddler). The Metro Red Line runs from North Hollywood to Union Station, with tons of gems in between. From breakfast through dessert, we’ve put together an entire day of food, fun and frolic your rowdy riders won’t soon forget, and it’s all easily accessible by train. So swipe that TAP card and come along!

Bonus: Children under age 5 travel totally free on the Metro Rail with a fare paying adult. Breakfast at Square One Dining – Vermont/Sunset Station
Start off your metro excursion by popping into one of LA’s top breakfast hotspots. After all, it is the most important meal of the day. Just a quick stroll from the Vermont/Sunset Station, Square One Dining is super easy to find – just follow your nose and the intoxicating scent of maple syrup and bacon. On almost every foodie’s “best of” list in town, Square One features organic, to-die-for dishes your kiddos will go gaga over like buttermilk pancakes with bacon-enriched caramel sauce and French toast with warm seasonal fruit and whipped cream. And the atmosphere’s fab to boot with it’s cozy and bright interior and a patio that offers plenty of lovely seating. You may have to wait a few minutes for a table since this place is plenty popular, but we promise it’s so worth it. Mmmm… Ride Angels Flight, Browse for Books & Grand Central Market – Pershing Square Station
After breakfast, rejoin the Red Line until you reach the Pershing Square Station. Take your littles for a rollicking ride aboard Angels Flight, the shortest railway in the world. As one of the most affordable attractions in the city (only 25 cents each way for TAP card holders), Angels Flight will thrill little and big kids alike as it ascends up the steep hill connecting Hill and Olive Streets. After your ride, trek a couple of blocks over to the Last Book Store, where you can browse the cool space and stock up on great kids books as well as $1 finds.  Walking a few blocks can tire little legs and work up an appetite, so there’s no better place to treat your tots for lunch than LA’s oldest food arcade, Grand Central Market. From Middle Eastern dishes to Thai curries and American coffee shop classics, every food you can imagine is here. Though tikes will especially dig the tacos at Las Morelianas, Salvadoran papusas from Sarita’s and the delicious wonton soup at China Cafe. Play at Grand Park & Soak in the View at City Hall – Civic Center/Grand Park Station
After lunch, hop back aboard the Red line to Civic Center/Grand Park Station. As one of LA’s newest and most expansive parks, Grand Park showcases 12 acres of pure play perfection where kiddos can easily burn off that excess energy (read: nap in your future). This gorgeous urban oasis not only features a wadeable fountain and splash pad that kids love when the weather’s warm, but also plenty of open green space for a game of red rover and tons of weekly events, including free yoga and special food truck days. And since you’re literally just steps away, be sure to swing by the observation deck on the 27th floor of City Hall. It offers an unobstructed view of downtown LA that will fill your tots with “ooo’s” and “ahh’s.” Churros at Mr. Churro – Union Square Station
Your Red Line day o’ fun concludes at Union Square Station. A quick walk to vibrant Olvera Street leads to the sweetest part of your adventure yet when you pop into Mr. Churro. We assure you, these are not your average run of the mill churros, no siree Bob. These are sugarcoated pillows of dough deliciousness filled with chocolate, cream, caramel or strawberry. One of the few spots in LA to offer churro fillings, this neighborhood delight will leave you drooling the days away until your next excursion downtown.  (Oh, and if you would like to relax at one of the cafes, sipping a Margarita while the kids people watch, you’re not driving, and we won’t tell.) Have you discovered any must-see spots you just have to hit up when traveling by Metro Rail? Give us a shout!

Red Tricycle > Things to Do > Ride, Baby, Ride: Spend a Day on the Red Line 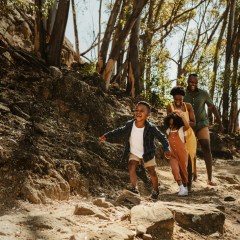