This Man Proposed to His Girlfriend, but What He Asked Her Daughter Has Us Teary-Eyed 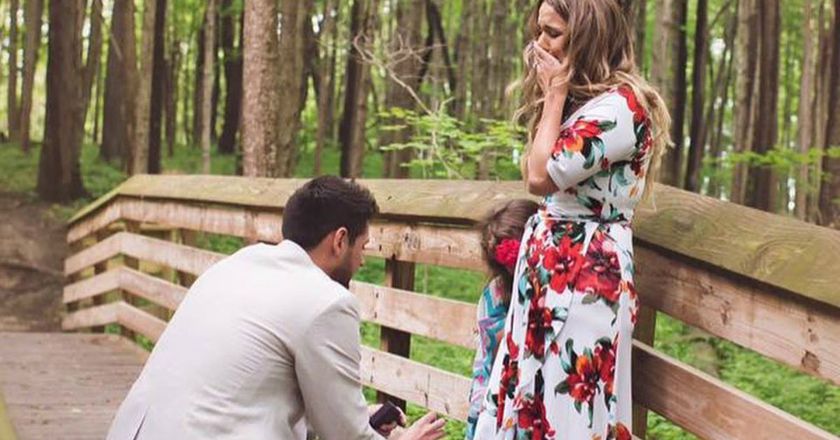 photo: Mandi Gilliland via How He Asked Facebook page

Cassandra Reschar had a feeling something was up the morning Grant Tribbett proposed to her. She just didn’t know what a special day it would be.

That morning he told Reschar and her daughter Adrianna that he was taking them out to a nice breakfast. When they arrived at Cracker Barrel, Reschar was confused as to why she got dressed up to go to there, and got nervous, she shared on How He Asked. After eating, Tribbett drove them to Ritchey Woods Nature Preserve in Fishers, Indiana, leading them a mile into the woods until they came to a small bridge. It was then Tribbett got down on one knee and popped the question.

The scene was captured by Reschar’s friend and professional photographer Mandi Gilliland, who had been hidden.

But that wasn’t all. After Reschar accepted, he asked her daughter:

“Adrianna can I be your daddy, to promise to love and protect you for the rest of your life?”

Reschar was thrilled Tribbett included Adrianna, even thoughtfully giving the little one a necklace in her favorite colors.

“His proposal to Adrianna meant the absolute world to me,” Reschar told TODAY. “It’s special to find the man whom your soul loves, but to also find a man who loves your child unconditionally was a dream I never thought could come true.”

And, of course, Adrianna will be the flower girl at their wedding.

Do you have a great proposal story? Share it in the comments below!

Red Tricycle > Uncategorized > This Man Proposed to His Girlfriend, but What He Asked Her Daughter Has Us Teary-Eyed