Man vs. Toddler – Why My Kid Wins Every Time 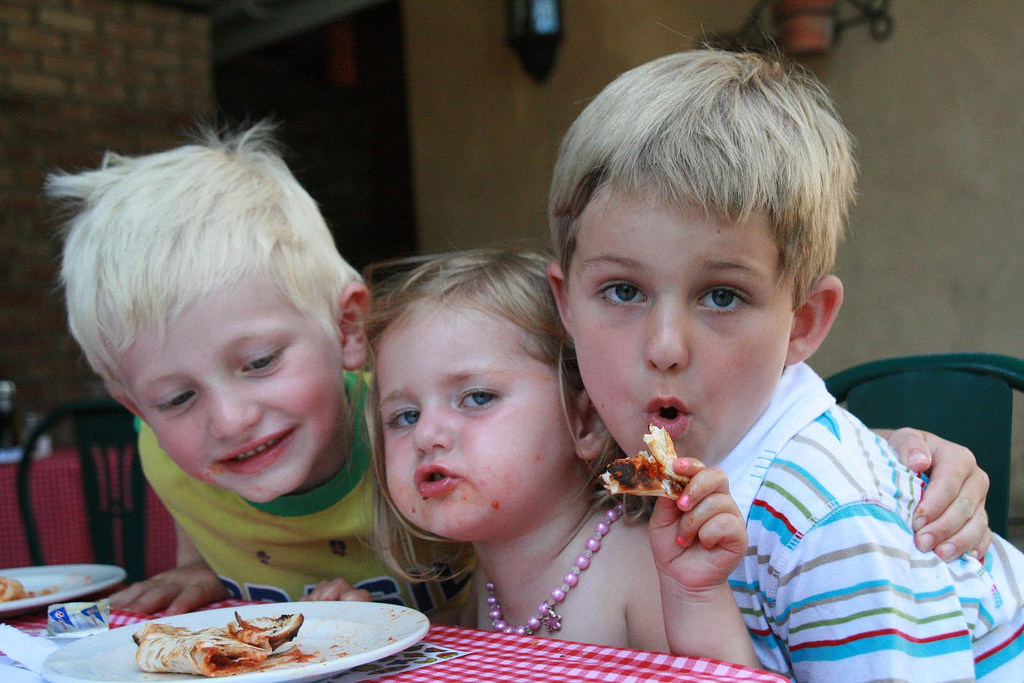 I’m certain that there isn’t a concept more categorically hated than that of children in restaurants. Since becoming a parent, dining out with my best little pal has become, well, an annoyance. The number of times I get stink-eye, side-eye, or a collective eye roll from patrons when we are seated next to them is uncanny. My kid hasn’t even had a chance to prove he’s well-behaved before the huffing and puffing begins. The interwebs are filled with angry rants from childless diners making a stance, and some restaurant owners have even thrown down the gauntlet when it comes to offering a kid-free dining experience.

It must be said that they aren’t all wrong: Sometimes, a lot of times, kids are jerks. It’s true. I see it. The shrieking little monster blowing snot bubbles out of his nose, the pint-sized villain descaling the bottom of his shoe into his sister’s pasta while singing That’s Amore, the flinging of wet straw wrappers into patrons’ ears, and the community bottle of ketchup that is now half saliva. In which case, get it together, parents.

Yes, kids at restaurants can be a nightmare, but sometimes adults are boneheads, too. I have witnessed some pretty nasty behavior recently proving once again that Adult Toddler Syndrome actually exists. At least kids have an excuse for acting like kids, what’s yours?

So, let me throw my toddler’s sippy cup into the ring and let you decide who should be banned. Read on for my list of top 6 obnoxious behaviors by (cough) grown-ups:

1 – “That’s not what I ordered,” spat the guy wearing the ‘I Heart Fried Beef’ t-shirt at the table near us. Pushing an already devoured entrée away from him in disgust he said, “Bring me a new one to go – for free!” Newsflash: Actually, you did order that – my toddler and I heard you from two tables over.

2 – The wasted college girls at the bar seating insisted on splitting the bills 7 ways. When the server explained he could only run a maximum of 4 cards, the mouthy brunette hollered after him, “There goes your tip!” Ladies, you’re right: Your server didn’t deserve a tip. He deserved your entire month’s salary. Basically, you’re a bunch of entitled jerks who overstayed your welcome with cheap drinks and free chips.

3 – Then there was the creepy, middle-aged trio of guys in the corner booth who clearly thought their adorable waitress was there to be sexually harassed, Bill Cosby st‌yle. Hey, creepy dudes, go home to your wives. You’re drunk.

4 – How about the woman at breakfast last weekend who demanded to see a manager when the “egg whites only” omelet she ordered and agreed to pay an extra buck for appeared on her bill? At first she seemed sweet but determined. But nope, she was just a big donkey who promised all within earshot she’d Yelp about her “horrible $1 experience.”

5 – Or there was the guy a few weeks back who yelled at me when my kid’s drink inadvertently spilled, flowing onto “his” side of the table. Five minutes later, he knocked his beer over into his pizza. Karma.

6 – And don’t you love the dudes who come in 8 minutes before closing, and stay for 2 hours? Boom. Done. Enough said.

Get it together, guys. Because what’s sexier than a man with BBQ sauce in his beard screaming about his baby back ribs? Everything, actually.

ABOUT THE WRITER Elizabeth Silva
Mostly for Keeps

An artist, musician, and writer, Elizabeth's unique take on life can be found scribbled across the pages of Red Tricycle, Holl & Lane Magazine, TODAY, and BlogHer. Elizabeth’s storytelling is inspired by parenting, friends, fashion, food, and the idiosyncratic charm of the human condition.
MORE FROM Elizabeth:
Published Work, Art, Storytelling
Red Tricycle > Spoke Contributor Network > Man vs. Toddler – Why My Kid Wins Every Time