We’ve all done it at one point or another: hovered too much, hyper-nagged or over-cautioned to a seemingly infinite extent with our partners when it comes to parenting. But sometimes those little comments are actually life-savers—seriously. One mom’s texts about her child’s car seat had a an outcome that she could have never imagined.

When Rebecca Tafaro Boyer went back to work after having baby William, she requested hourly updates (along with recaps) from her hubby David. If that seems like nagging…well, think back to your first day away from your baby. We get where she was coming from. But what happened after David texted his waiting wife pics of their three-month-old son certainly wasn’t expected. 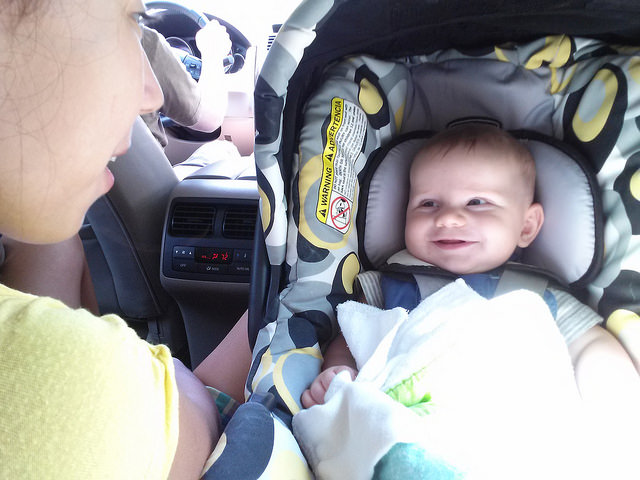 Boyer wrote on her Facebook page, “This afternoon around 2:15, I got a text from my hubby during their trip to Walgreens. My nagging wife reply was to correct William’s position in the car seat – the straps were too loose and the chest clip was way too low.” Even though Boyer was sure that her husband would laugh at the text and roll his eyes, she also knew he’d follow her reminder.

Fifteen minutes later the new mama got a phone call from her panic-stricken husband. He and their baby had been in an accident that was serious enough to total their car. Of the accident, Boyer posted, “My precious little bundle of joy was so well restrained in his care seat, THAT HE DIDN’T EVEN WAKE UP, Even with the impact of the two cars, William only received a minor jolt.” While the well-restrained baby was perfectly fine, husband David broke his foot in three places.

So the next time that you feel like a nagging mama, remember this story. And always, always, always check your child’s car seat for proper installation.