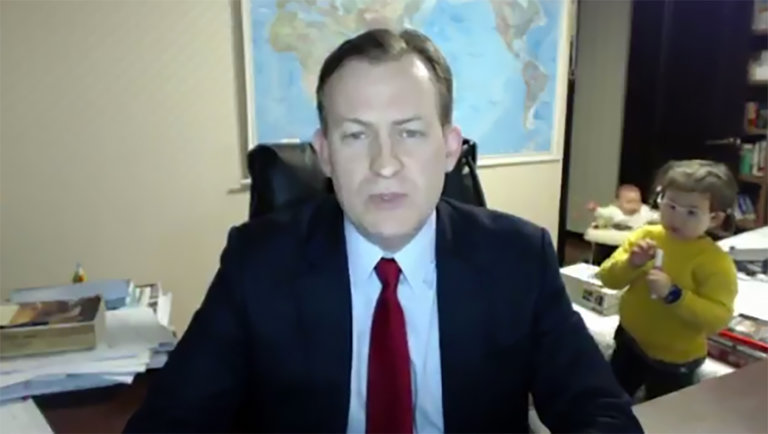 Changing diapers and quelling tantrums are certainly vital skills, but one of the most important lessons you’ll ever learn as a parent is: always lock the door. For one unfortunate father this lesson was learned the hard way on live television. Check out the video below to witness the hilarious results when his kids walk in, and see if you can pinpoint the exact moment he officially regrets working from home.

Being invited to speak as an expert on international relations for the BBC news is a pretty serious gig, but thanks to Professor Robert Kelly’s kids, there’s nothing serious about it. As he launches into his live broadcast, he suddenly receives some unwelcome interview crashers. First his daughter skips in to show off her dance moves. Then, not to be left out, the baby cruises in riding a rolling walker. The icing on the cake, which moms everywhere can certainly relate to, is the look of horror on his wife’s face when she bursts in behind and sweeps the kids out just a few seconds too late of avoiding becoming an internet sensation.

As the door finally shuts, Kelly, who has remained unwaveringly composed the entire time, closes his eyes and takes a long deep breath before continuing, as the muffled sounds of kids crying can be heard outside. Ah, parenthood. The good news is he’ll never forget to lock that door again.