My Mother, My Hero 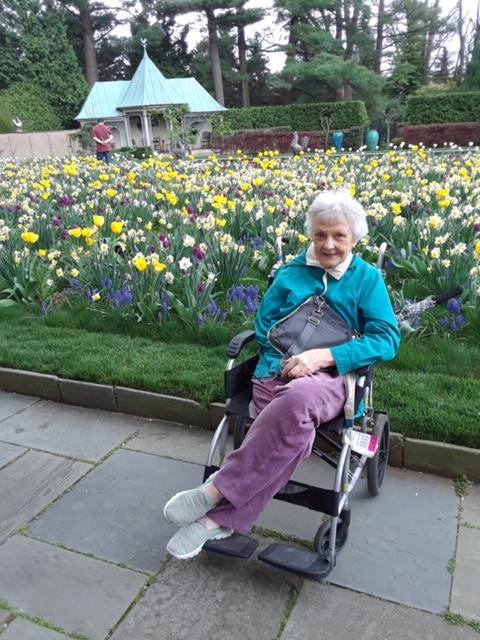 My mother is disabled. She has been paralyzed since she was 42 when her light-blue VW bus was struck by another vehicle while stopped at an intersection. Her body flew through the front windshield, and she was declared dead at the scene. She wasn’t. She had seven children all under 14 and we needed her. I was three.

I don’t remember much from that time, just a string of well-meaning neighbors and relatives and a lot of frozen lasagna. I do remember visiting her in the hospital on her birthday later that summer. My father had to sneak me in because no children were allowed in the ICU, and I hid under his trench coat so that no one would see me. When I saw her, she was immobilized in a hospital bed and was dressed from head to toe in pale green hospital apparel. She looked shockingly weak. I remember her smiling at me. I was afraid that she would never come home.

After months of hospitalization and rehabilitation, she did come home. The accident caused her to permanently lose the use of her right arm, left leg, diaphragm and neck mobility. Breathing was difficult, and she often became out of breath just from trying to read out loud to me. She couldn’t walk. She couldn’t cough. She couldn’t write. She couldn’t kneel. She couldn’t carry things. She couldn’t do many of the many activities that had comprised her life. And she had seven children, did I mention that?

Against all odds, as time passed, she started walking. I am not sure how it was possible, but my understanding is that she retrained different muscles in her body to compensate for those that could no longer work. At first, the walks were short, but they got progressively longer until eventually, she could poke along for several blocks. She learned to write left-handed. She learned to knit with one hand and has created countless beautiful pieces. She relearned to drive with a special knob on the steering wheel. She relearned to swim by holding on to little floaties. She is a fantastic cook and learned to utilize all manner of cool, one-handed contraptions to help her navigate her way in the kitchen. She seemed to refuse to give anything up. But all this was lost on me because I couldn’t remember her any different.

By the time I was six, I had become well-versed in pushing her wheelchair, and I would torment her by pushing her over grates that opened to the subway far below and laugh and laugh as she would shriek in fear. Sounds mean, right? But, to me, there was nothing wrong with her. I was just teasing, and she seemed to be playing along. Her disability was as normal as any mother’s slightly annoying, but endearing habit. As I got older I would push that wheelchair down bumpy, forested paths up and over all manner of tree roots and gravel. She would groan good naturedly and hold on tight with her good hand. She has been launched from that thing several times and is always trying to find a wheelchair more suitable for all-terrain travel. Just last year I pushed her through a jungle in Mexico so that we could see Mayan ruins. It can’t be comfortable, all that jostling and jarring, but she always wants to go.

I cut her no slack. She cuts herself no slack. Today she is 87.

I only have one memory of my mother before her accident. I am sitting on a metal folding seat, attached to the back of my mother’s black, clunky Schwinn. The seat is covered with a blue-plaid vinyl. It has little metal armrests and a small backrest. Not at all safe by today’s standards. My legs dangle freely below. I kick them forward and back. My mother’s legs are pedaling up and down, and her butt is in my face. It swishes a little, side to side. I don’t mind. Her efforts are creating a nice breeze, and the landscape whizzes by. Green grass, suburban lawns, huge maple trees. She is talking and laughing with my father who is on a matching bike.

I know there must be some connection between my mother’s internal drive and my quest to remain physical and engaged with life. She could have given up so many times, but she didn’t. She still doesn’t. She is hauling herself up to an island in Maine from Philadelphia for a visit again this summer. The trip involves a lot of logistics and not everything is handicapped-accessible in the little cottages she rents. Her mobility is decreasing and little tasks are getting more difficult, but she’ll be damned if she is going to stay home and sit around. She doesn’t want to miss out!

My determination pales in comparison.

ABOUT THE WRITER Leah Day
Bikemum

Beginning in August 2019, my son Oakley and I will cycle across America over the course of three months. Oakley is a spirited 15-year-old boy who has always struggled to fit into the confines of mainstream culture. I am Leah, his mother—and we are ready for adventure.
MORE FROM Leah:
Bikemum.com
Red Tricycle > Spoke Contributor Network > Real Talk > My Mother, My Hero