My Son Is Almost Three And Still Uses A Pacifier 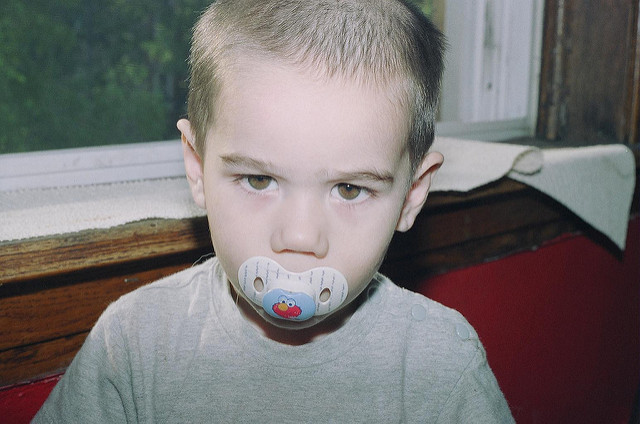 My son will be three next month and he still uses a pacifier at night. He calls it his bink.

I’d like to tell you that I don’t really care what anyone thinks about my son using a pacifier as a, nearly, three year old, but that’s not entirely true.

This unwelcome feeling of guilt is tied to expectations that are not my own, which is even more unsettling.

For the most part, I’m not one to get too hung up on things like this. I don’t care when kids start walking, how long they drag around a special blanket, or if they suck their thumb. Kids mature and grow at different rates, and I have always held the belief that when they are ready, they will meet that next milestone. I try not to wish and worry about when that time will come.

My son’s pacifier is a source of comfort. Since he was an infant he has struggled with recurrent ear infections. Despite our best efforts, and weekly trips to a specialist, his ear problems persist. It has become a chronic issue that is often accompanied by pain.

As a mother, there is no worse hell than seeing your child in pain. When the antibiotics and pain medications aren’t enough, he always asks for his bink. I would give him the moon if I thought it would make his pain more bearable.

It’s the only thing he is particular about. He doesn’t have a special toy or blanket, and it feels wrong to take this away from him before he is ready. I know I could take it away and endure a few nights of tantrums to “break the habit”, but why? What’s the difference between me taking it from him now or him deciding to give it up on his own, when he’s ready?

I’m an educated woman, so I try to consider the various outcomes of something like this. The pros and the cons, if you will. According to the American Dental Association, as long as a child discontinues pacifier use by the age of four, it poses no risks regarding his dental health or development.

As far as his emotional development goes, I can’t see that letting him use a pacifier is anymore damaging that taking it away.

I have to wonder, would I still be thinking about this if his source of comfort was a ratty old teddy bear?

Probably not. My guilt is at the hands of society’s expectation and perception of normal. But the truth is, although it may not be considered normal  by some standards, it’s not hurting anything. I’m not damaging him by allowing him this comfort measure.

There is a lot of maturing that will happen between now and the age of four, and I think he will give up his bink long before then. If he doesn’t, we will cross that bridge when we get there.

I’m likely in the minority with my approach, and that’s OK. I’m no expert, but it’s a pacifier, not heroin, so as a mother, I think I’m still doing alright.

For the mamas out there wrestling with guilt over something like this, don’t. Let yourself off the hook. If you’re worried about something as trivial as a blanket, or a pacifier, or any of the millions of other little things that kids do when they’re young, you’re a great mom, because bad moms don’t worry about stuff like that.

This is small potatoes in the grand scheme of things, save your worry for something that deserves it, and keep doing what’s best for you and your babies, even if the world disagrees.

ABOUT THE WRITER Jorrie Varney
Close to Classy

Jorrie is a mother of two, who writes about the reality and insanity of parenting on her blog Close to Classy. She aspires to own furniture without stains, and enjoy a shower without an audience. You can follow her antics on Facebook, Instagram, and Twitter.
MORE FROM Jorrie:
What To Give Your Child When You Can’t Afford Christmas, Why I Don't Want to be Your Mom Friend, Dear Toddler, I Love You, But You Need To Chill
Red Tricycle > Spoke Contributor Network > My Son Is Almost Three And Still Uses A Pacifier