If you’re old enough to remember what a floppy disk is, then chances are you know all the words to “Where In the World Is Carmen Sandiego?” That catchy tune and the incredible show it introduced left a lasting impression on a generation of young fans that can only be described as the “Carmen Effect.” What is the “Carmen Effect,” you might ask? A new generation of kids is about to find out.

Netflix reboots the Carmen Sandiego of our childhoods with a brand new series on Jan. 18. In preparation for the premiere, Netflix did some research and found that, besides her iconic red hat and trench coat, Carmen Sandiego left a deep impact on Millennials who grew up discovering new countries and cultures while they travelled the globe alongside the elusive thief. And now these Millennials have kids of their own.

Looking at five years worth of Twitter mentions of Carmen Sandiego, Netflix compiled data into four distinct categories that have impacted fans in what they are calling the “Carmen Effect.” Of the 300,000 plus tweets analyzed, the majority reflected Carmen’s Signature Style (60 percent of tweets), which has inspired everything from high-fashion runways to Halloween costumes. Passport Goals (20 percent) represented another big chunk of Carmen related tweets, with many fans attributing their love of travel to their early days jetting off with Carmen on television.

You can also thank Carmen for those random Trivial Pursuit-style grains of knowledge you have stored in your brain. As a childhood icon, she not only taught kids her Sandiego Smarts (16 percent), she was also a Trailblazer (7 percent) and a role model. 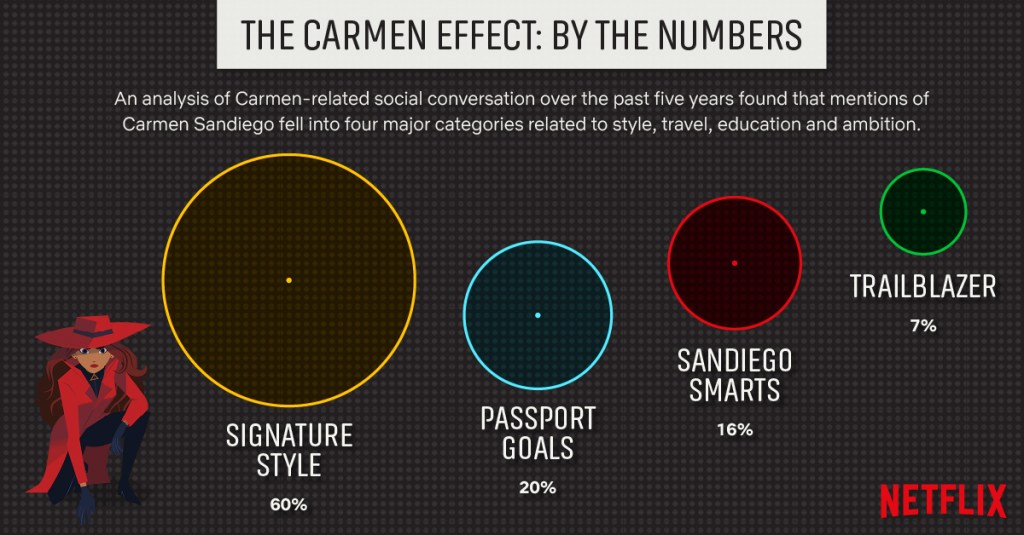 Now a whole new generation will get a chance to be introduced to the Carmen Effect as they join along in new international adventures that are sure to leave them with a little wanderlust and a stylish fashion sense of their own.

“I think parents are going to want their kids to watch the new Carmen Sandiego because it’s not only educational with the geography facts and other cultures, but it also portrays a strong, independent, loving educated woman,” said Gina Rodriguez, voice of Carmen Sandiego. “She’s a multi-dimensional character. She feels and loves just as much as she is strong and rebellious. To me, she’s a beautiful character to portray to our youth today.”

A week in Egypt and Italy planned for this year. Trying to follow my childhood role model Carmen Sandiego.

You and your kids can explore and learn more about the Carmen Effect on the website here. The first season of Carmen Sandiego drops on Netflix on Jan. 18.

Where in the World IS Carmen Sandiego? Actress Gina Rodriguez Stars in New Movie