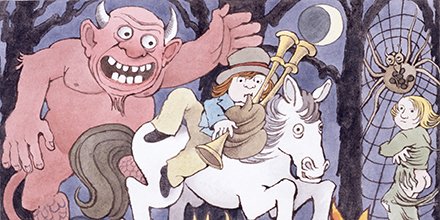 Where the Wild Things Are author and illustrator Maurice Sendak left behind a gift for his wild fans when he passed away five years ago. A new book by the beloved children’s book author has just been discovered and is set to be released next year.

The previously unpublished picture book is titled Presto and Zesto in Limboland and was co-written by Sendak and frequent partner Arthur Yorinks. The book, which was uncovered by The Maurice Sendak Foundation last year, is based around several Czech nursery rhymes. “What a miracle to find this buried treasure in the archives. To think something as good as this has been lying around there gathering dust,” Sendak’s publisher Michael di Capua told Publisher’s Weekly.

Arthur Yorkins recalled working on the book with Sendak, telling Publisher’s Weekly it was a “hysterical afternoon of cracking each other up.” He continued, “The story became an homage to our own friendship so we named the characters after ourselves — Presto and Zesto.” The new book will be published in the Fall of 2018.

Is Where the Wild Things Are a favorite in your house? Share your thoughts in the comments.