Residents of Washington DC are lucky. They get to visit any Smithsonian Museum free of charge anytime. Well, on Saturday, September 29, 2012, New Yorkers can experience for themselves what that’s like when Smithsonian Magazine’s annual Museum Day offers free admission to participating venues across the country. Since, unfortunately, you can’t hit all of the available spots, we offer a head’s up on where you might want to focus your attention this year. New York City Fire Museum
There’s something about a bright red fire engine screaming through the streets that fascinates young and old, and this museum definitely caters to that fascination.  In addition to shining a spotlight on the history of NYC’s fire brigades from 1648 to the present, there is also a memorial to the fire-fighters who gave their lives on 9/11– a wonderful way to being a dialogue about that day soon after the citywide commemorations will have happened, as well as an interactive fire safety program specifically for kids featuring a mock apartment and lessons about the fire dangers inherent in each room of the house.

The Bard Graduate Center
Step right up, folks, step right up for Circus in the City!  See photos and over 200 pieces of other memorabilia documenting this humble art form’s rise from 1793, when Scotsman John Bill Ricketts opened his first trick horse show on Greenwich Street up through the mix of equestrian, animal, and acrobatic acts made famous by the one and only Barnum (both before he hooked up with Bailey and after).  Also on display will be toys, posters, prints and photographs of circuses parading through the city in different eras, as well as antique wooden carvings by Samuel A. Robb, New York’s preeminent manufacturer of show and shop figures.

American Folk Art Museum
When an exhibit calls itself Ooh, Shiny, odds are, that’s the reaction it’s looking to evoke.  This particular collection of Ooh, Shiny things ranges from needlework by 18th-century schoolgirls to sculptures by contemporary icons including Howard Finster, all embellished with shiny things like spangles, mica flakes, glass, marble dust, sequins, glitter, and aluminum.  And if that’s not reflective enough glare for you, also check out Foiled: Tinsel Painting in America.  Popular in the U.S. from 1850 to 1890, this complicated, fragile art form entailed reverse painting on glass with smooth or crumpled metallic foil which was then applied behind translucent and transparent areas.  When viewed in candlelight or gaslight, the effect was one of shimmering highlights.  In other words: Ooh, shiny!

Brooklyn Museum
Though already one of NYC’s major art museums with something for everyone in the family, kids might get the biggest kick out of the Mummy Chamber and its close cousin, Body Parts: Ancient Egyptian Fragments and Amulets (seriously, who doesn’t love body parts)?  Also of interest for those who tend to squirm during museum visits are Visible Storage, a peek behind the scenes of where works of art are kept when they aren’t on display, and the Sculpture Garden with it’s giant, looming, carved granite lion’s head and the Statue of Liberty’s little sister.

Cradle of Aviation Museum
Worth making the trip out to Long Island for, this Air & Space Museum’s permanent exhibitions start with the Dream of Wings in 1870 and trace the ensuing path up through World War I, the Golden Age, World War II, the Jet Age, and into Space Exploration.  In addition, a Giant Screen Theater brings you up close and personal with Tornado Alley, giant whales and more!

All of the above museums, as well as hundreds of others, will be free of charge on Saturday, September 29.  However, tickets are required.  Click here to request yours.  Ticks will be emailed and must be printed and presented at the location. For a complete list of all participating venues, go to the main website.

What museums are your favorite, free or not? Leave us a comment below! 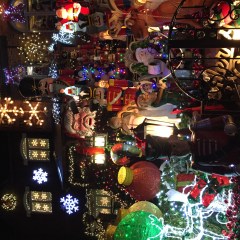