You could be forgiven for thinking, if even briefly, that you were on the luscious Waterfall Trail in Prospect Park when you visit the newly-opened Brooklyn Bavarian Biergarten at Grand Prospect Hall in Park Slope. Situated a stone’s throw from a major underpass of the Prospect Expressway, the biergarten is a veritable oasis filled with leafy mature trees, fountains, a stream and yes, charming waterfalls. Also: beer. So much beer — plus lots of history, space and tasty treats, too! (Did we mention the stroller parking?) 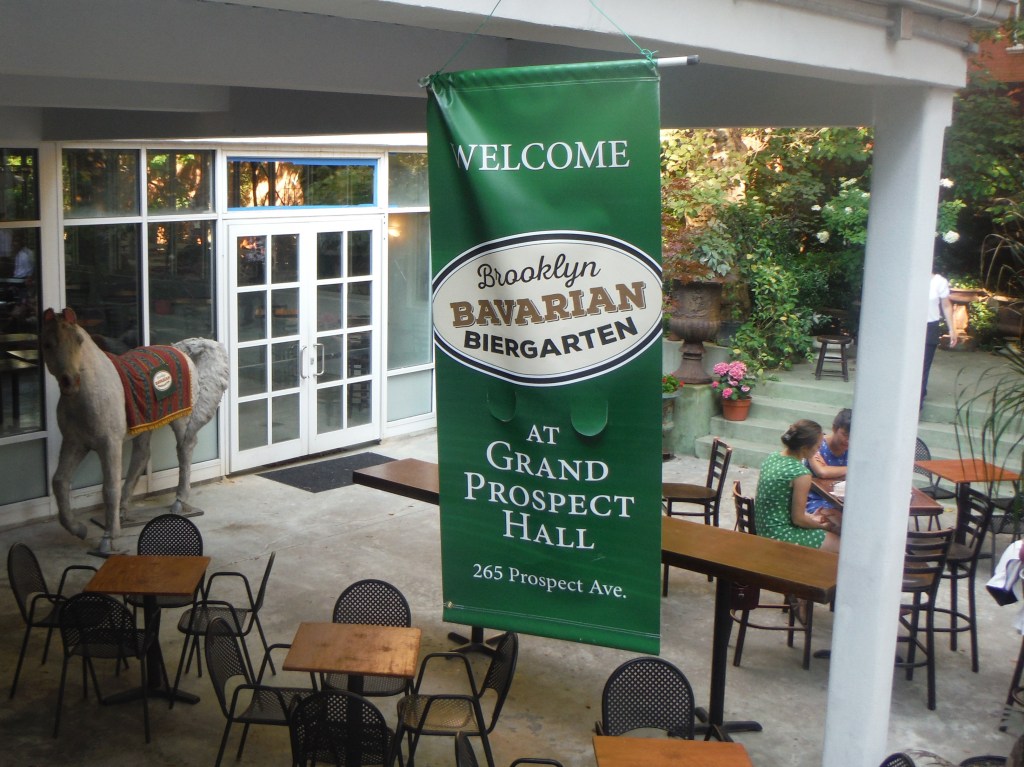 A Place with a Past
This spot is the perfect setting for a beer garden, which explains why, some 125 years ago, that is exactly how the space was used. Such an outdoor space was part of Grand Prospect Hall when it was built in 1892, explained Catherine Hay, a manager at the biergarten. “Opening the biergarten today is a natural extension of the hall’s history and a tribute to the area’s past German American heritage,” she said.

Today, the landmarked hall is as famous for its homegrown, late-night commercials as it is for its illustrious history. (In addition to 14 turn-of-the-twentieth-century style ballrooms, there are three, old-time speakeasies, in one of which, legend has it, Al Capone received his characteristic facial scar in a barroom brawl.) 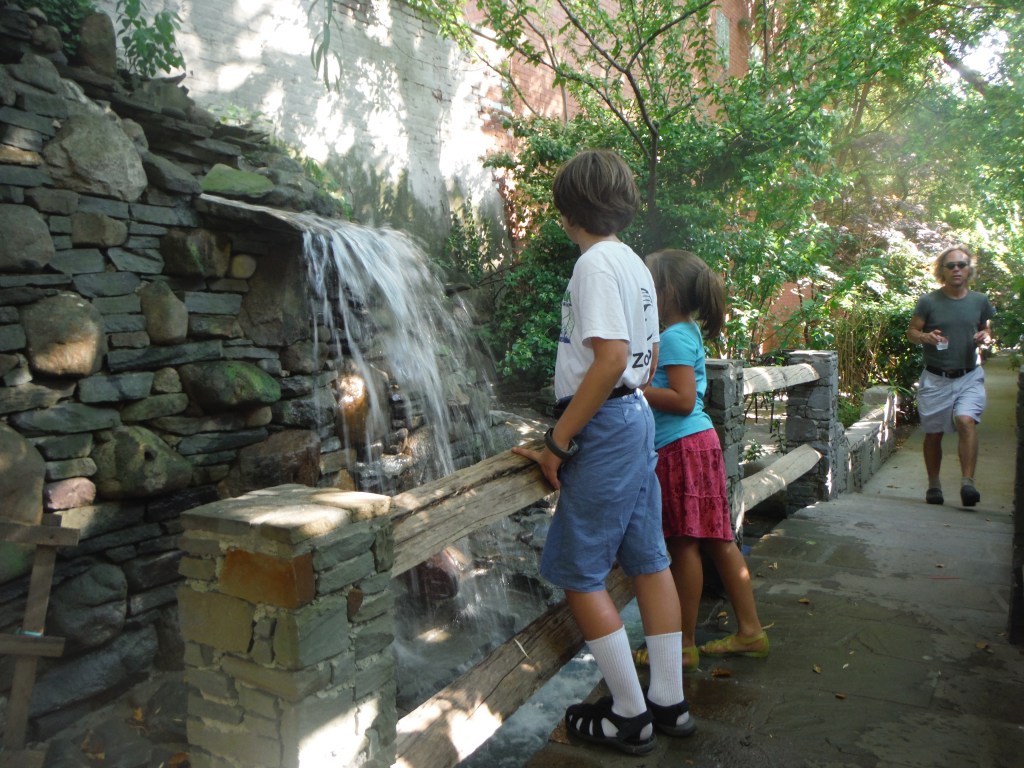 The Green Scene
The large patio is divided into sections and pathways by wrought-iron fences topped with bright, kelly green banisters. A long rectangular fountain with four dozen spouts separates the lower and upper patios in the front garden. A weathered memorial wall—dedicated in 1945 to local Polish Americans who served in World War II—divides the patio in half. Family members and friends still come to leave votive candles and flowers at the site.

A trail in the back of the garden leads to a stream and waterfall, and beyond that, an even larger waterwall. Picnic tables that can seat up to eight people comfortably are tucked among the trees and shrubs that line the path. Overall, the patio can accommodate 500 patrons, and the soon-to-open inside will make room for an additional 500. 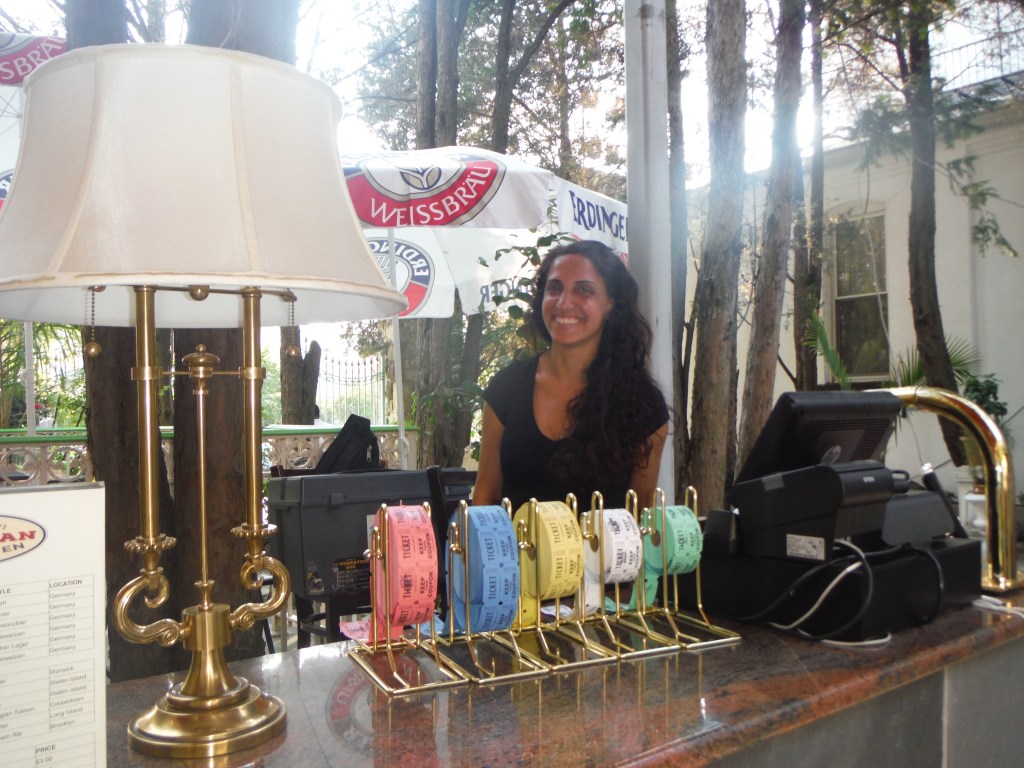 The Beer and Other Beverages
The beer menu offers a rotating selection of suds at $7 per pint. There are 26 taps with six German and eight New York State styles featured on a given day. Ms. Hay homebrews and runs beer events such as the Coney Island Homebrew Contest on the side, so you can be sure the selection is varied and inviting, ranging from traditional hefeweizens, pilsners, and schwarzbiers to local summer seasonals, IPAs, ales and porters. (The Reisdorf kölsch and hoppy wheat brews we sampled  were fresh and complex.) The Biergarten serves wine, too, locally-sourcing it from the Red Hook Winery, and a the bar is fully stocked to accommodate requests for cocktails.

The bar uses a ticket system that will be familiar to any parent who has attended or worked a school fundraiser. You first buy a batch of color-coded tickets for beer, juice, or whatever you’re imbibing near the cash register, and then give the bartender the number needed to fulfill your tab. 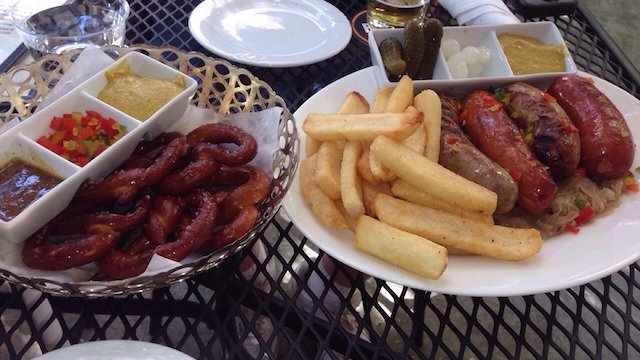 Eats Both Old Country and Nouveau Brooklyn
Given the proliferation of pretzel carts around New York City, we were skeptical when we saw not one but five pretzel options headlining menu. Well, they do pretzels really well, here. Do not leave without trying the truffle cheddar soft pretzel, complete with gherkins, pickled pearl onions, kraut, and two mustards—whole grain and a saucy yellow—on the side.

The four-sausage sampler was likewise delectable, and the kale salad featured roasted pears, walnuts and warm goat cheese croquettes with a breaded exterior so lightly crisp that it cracked before oozing warm cheese. We also indulged in a thick slice of German chocolate cake with vanilla ice cream for dessert. It had an unexpected hint of licorice in the coconut frosting that, even more unexpectedly, our junior dining companions loved. Prices range from $6.50 for various pretzels to $18 for the sausage sampler. 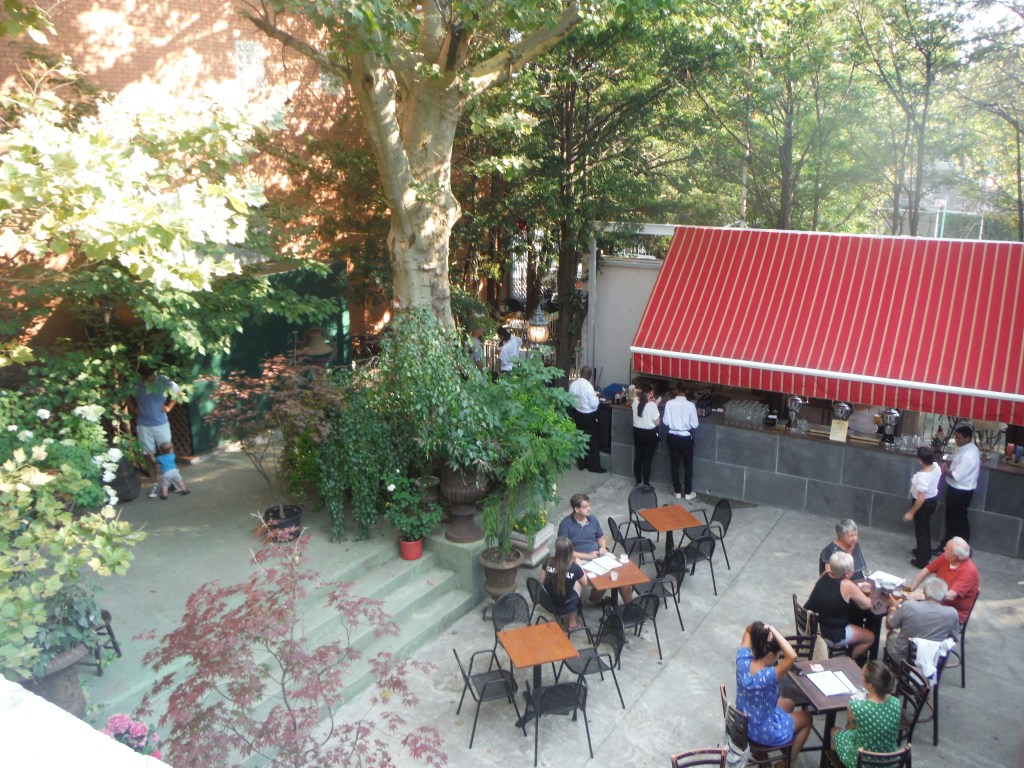 Getting There
Take the R to Prospect Avenue and 4th Avenue and walk a block and a half east. You cannot miss the Grand Prospect Hall coming up on your left, just after 5th Avenue. (Note that Google Maps indicates that the D stops at Prospect Avenue, but it does not! If you make this mistake, get off at the next stop and transfer to the Manhattan-bound R.)

Also note: The Biergarten is 21 and over after 7 p.m. and no dogs are allowed. Gates open at 4 p.m. Tuesday through Friday, noon on Saturday and Sunday.

Have you visited the Brooklyn Biergarten yet? Tell us about your trip in the comments below! 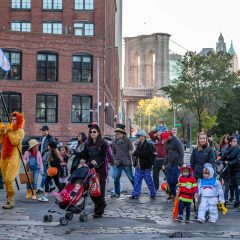 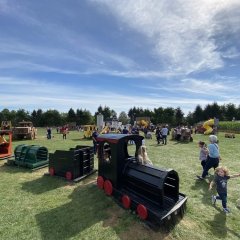 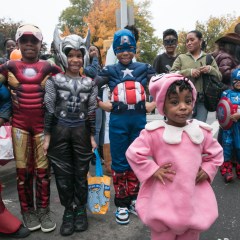 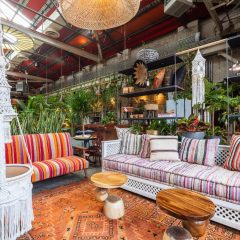 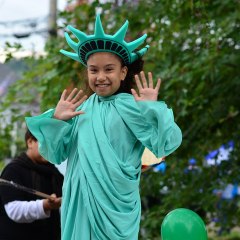 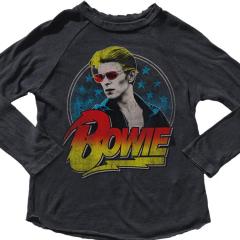 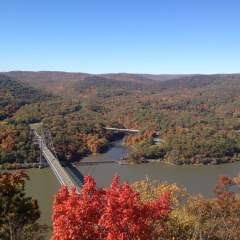 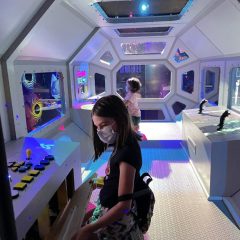