We know you were just thinking that the level of anticipation for the new Star Wars film, Star Wars: The Force Awakens was not quite high enough in your household. Guess what!? Discovery Times Square just unleashed a new exhibit dedicated to the entire movie franchise’s costumes, and it’s guaranteed to whip even the mildest of Star Wars fans into an intergalactic frenzy (including, perhaps, even you.) All we’re saying is: try not to freak out too hard in front of the kids when you can almost touch the real R2-D2 and C-3PO — or Princess Leia’s bikini of bondage. Read on you must! 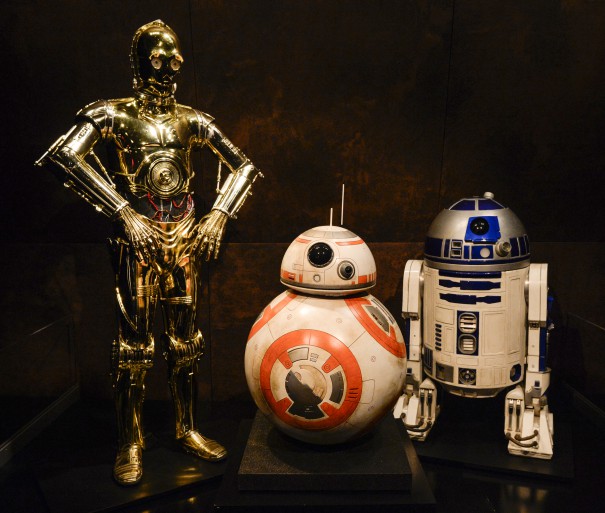 A Galaxy Far, Far Away — Close Up in Times Square!
Officially titled, “Rebel, Jedi, Princess, Queen: Star Wars and the Power of Costume”, the exhibit was developed by the Smithsonian Institution Traveling Exhibition Service in partnership with the Lucas Museum of Narrative Art and in consultation with Lucasfilm Ltd. In other words, real pros and major players were involved in making it happen (including George Lucas himself, of course) so you know it’s quality.

The show, which is making its East coast premiere in New York, features more than 60 hand-crafted costumes and props (hello: actual lightsabers) from the first six Star Wars films, and — as a special highlight of the NYC exhibit — seven additional costumes from the upcoming Star Wars: The Force Awakens.

A particular striking aspect of the exhibit is how close you can get to many of the props and costumes, which aside from being kind of mind-blowing (i.e., that’s really Chewbacca right there?) also allows visitors to see up close the incredible craftsmanship that went into making so many of the pieces. Even the costumes and elements behind glass are presented in such a way that you can really get a good look. 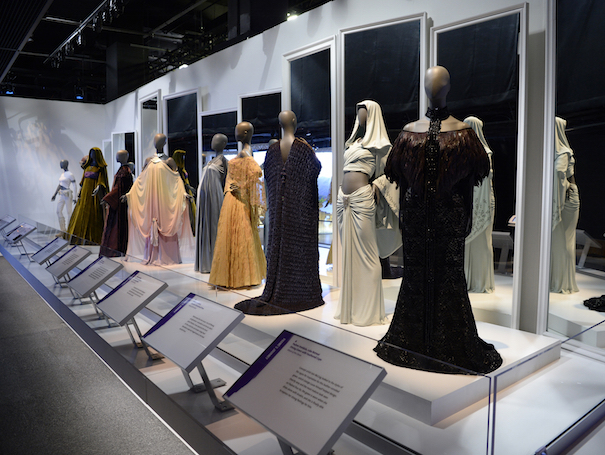 Go Deep or Just Geek
Nine “chapters”, or sections of the show explore various aspects and eras of the Star Wars universe, including Jedi versus Sith: Form, Function and Design; Concept and Design for Royalty and Beyond; Symbolism and Military Power; Outlaws and Outsiders and Droid Design. The galleries have a real museum-quality feel, particularly the expansive displays of the royal court finery, with its incredibly-detailed gowns and rich fabrics; the costumes of the Galactic Senate, and an extensive section dedicated to the many looks of Padmé, from scrappy, to lux to pretty hot.

One of the best things about the show (especially for families and kids of all ages) is its simultaneous visual razzle dazzle (OMG Boba Fett! Yoda no way!) and deep dive on the artistic process, historical influences and fabrication of the costumes — so it can really be appreciated on many levels.

For example, the show cites the influence of Mongolian headdresses and Pre-Raphaelite art on Queen Amidala’s outfits; illustrates the references to Nazi and U.S. military uniforms seen in the costumes of the Empire and the rebels; and explains how Han Solo’s threads are a direct nod to the icon of the American hero/cowboy and Gary Cooper in High Noon. (Darth Vader’s headpiece? Samurai helmet.) 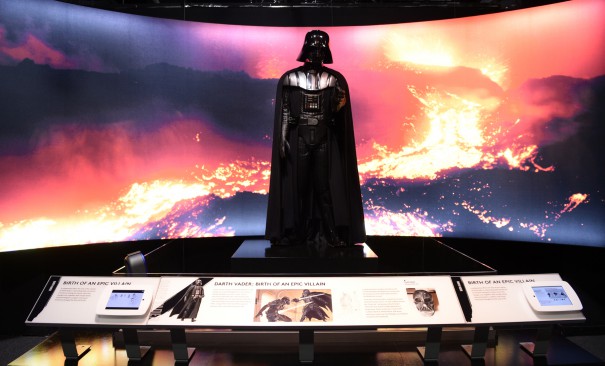 Bells and Whistles
There’s more to do than just look. In addition to the expected explanatory text (which is both interesting and concise), “The Power of Costume” includes several interactive elements such as iPads with images of early sketches and designs; swatches of fabric to touch; short films with behind-the-scenes shots on location, and even buttons to “activate” the lightsabers in some displays. The show also features great sound design, which incorporates all the evocative noises and music from the movies: lightsabers firing, Darth breathing, the “Imperial March” and John WIlliams’ rousing main theme. 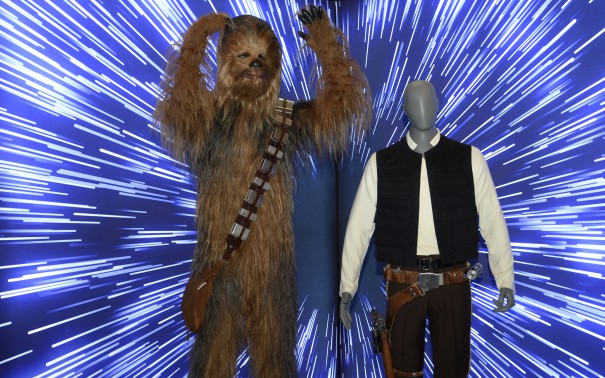 Tasty Trivia
You should also be on the lookout for fun trivia bits highlighted at various points throughout, such as the fact that the Queen Amidala Throne Room Gown from The Phantom Menace (which featured lights at the bottom) was powered by a car battery under the skirt, and severely limited actress Natalie Portman’s mobility in the scene. Or, that the initial version of Han Solo’s shirt featured a large, Peter Pan collar, prompting actor Harrison Ford to say, “No no no, that’s wrong. Can’t wear that.” 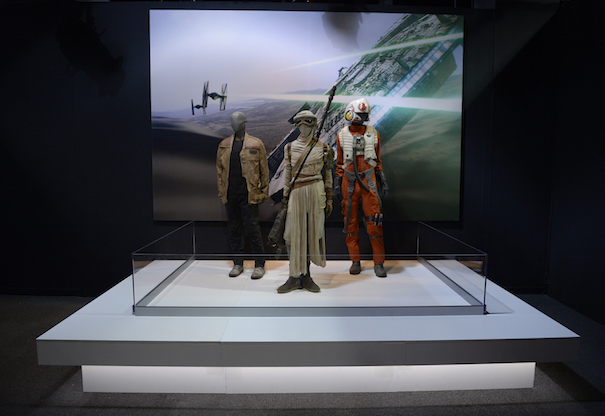 Before You Go
The final chapter of the exhibit features the seven new costumes from The Force Awakens (the goodies and the baddies face off against each other on opposite side of the gallery), as well as an interactive station where visitors can “become” a Stormtrooper, Darth Vader or C-3PO. Three full-length mirrors become “activated” when a person stands in front of them, bringing the characters on screen; the characters then mimic a person’s movements — and if you’re Darth Vader, you even get to wield a lightsaber.

Don’t leave without checking out the gift shop. We saw a preview of the goods and they are pretty sweet!

Will you be checking out Star Wars and the Power of Costume? Tell us in the comments below!