There are two kinds of kiddos. Those who find the idea of a monster living in his closet infinitely interesting and those who find it utterly terrifying. Both types were in attendance for the grand debut of kiddie rock star Laurie Berkner’s first-ever musical play, Wanda’s Monster, opening weekend at Making Books Sing on Manhattan’s Upper West Side. What’s the story with this monster?
When the show begins, the two types of little ones really make themselves known. At the performance we caught, about half the audience sat patiently through the opening number -Granny sings about her granddaughter, the titular Wanda. But, as soon as the fur-covered monster, complete with horns, big feet and long claws came out and stood by the side of the stage, listening and clapping along, some of the kids in the audience laughed. And some screamed. And screamed. And begged to go home.

Though most managed to calm down once the monster got on stage where he belonged (and out of the audience), having Wanda herself express fear about a monster under her bed, followed by actually seeing said monster hiding there in her closet, set a few more off into tears again. Now, the message of the show, based on a book written by Eileen Spinelli and illustrated by Nancy Hayashi, is that monsters are nothing to be afraid of. In fact, they’re apparently very shy and only want a friend. Monsters who live in your closet are touched when you toss them a pillow to sleep on, or a panda bear to cuddle up with, or give them a paddle ball toy (on a very short string). You might be able to lure them out by narrating a thrilling, shadow puppet show (the most visually interesting part of the entire hour long production). And maybe then, even your older brother, who keeps explaining that he’s “eight and very smart” will believe that there is too such a thing as monsters.

All this fun and/or terror (beware!) will last for a week. Because, apparently, according to Monster Rules, monsters can only stay in a given child’s closet for one week – no exceptions. (Once again, there will be those who will find this immensely sad, and those who will feel very relieved.) Turns out Wanda’s Granny is an expert on the subject. Whew.

Spoiler alert!
The show ends with a tearful goodbye, and Wanda’s monster moving to her cousin Ruthie’s house, where Wanda will still get to visit him (presumably, merely for another week; and then there will be two devastated little girls to deal with). Bottom Line
The performances in Wanda’s Monster are solid, each role thankfully filled by actors who remember that they are performing to entertain children and not themselves. The book is clear,  the story easy to follow and the music is very much quintessential Laurie Berkner. If you’re a fan of Pig on Her Head, Victor Vito, We are the Dinosaurs or Bumblebee, the tunes in Wanda’s Monster will sound cheerily familiar. Some kids even got up to clap along and dance in their seats. But be forewarned, your little one may be one of the kid’s that gets spooked by the show’s furry purple star. Read on to get the full scoop on this show and why a little fright at the beginning may be okay. More Good to Know Info
Prior to the show, boys and girls were offered a bucket of crayons and several sheets of long, white paper pinned to the wall where they could draw their own monster. Some chose to go with the hairy, scary fangy variety, while others preferred the happy, smiley kind. There was also a Monster Mad Lib in the program to keep the squirmers occupied while waiting for the show to start.

When asked upon exit what she thought of the show, one little girl offered, “I liked it. It was funny. But, you should warn other people it’s a little bit scary. I wasn’t scared. But, other kids could be.”

What was the last live production you took your kids to see? 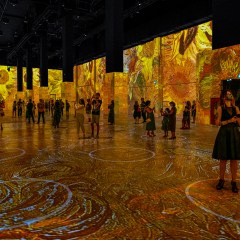