You know that one of the best things about this city is that no matter how long you’ve lived here, it can still surprise you. Your kids think they’ve seen it all? Try taking them to one of these undercover, out of the way, or hiding-in-plain-sight destinations. Some are old, some are new — but all are super cool in one way or another. Plus: they’re either cheap or just plain free to experience. 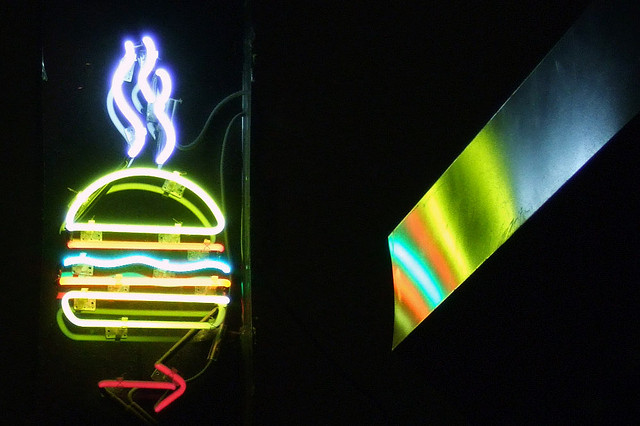 Perfectly acceptable as a destination in and of itself, or a genius lunch option before or after a Midtown excursion, Burger Joint has a lot of things going for it: it’s unexpected and incongruous, it’s literally sort of hidden and it serves delicious grub. Stroll into the lobby of the swank Le Parker Meridien and look for the neon burger. Follow the sign’s red arrow around the corner and you’ll find yourself in an old school, grungy-in-the-best-way (and likely fairly packed) restaurant. The name pretty much says it all, but tasty burgers and fries are the fare here, and you can also get a milkshake or a beer if you’re so moved. Posters for movies and television shows and lots of graffiti from past patrons cover the walls, and the crowds (expect to wait to order at the counter and perhaps for a table) are part of the experience. 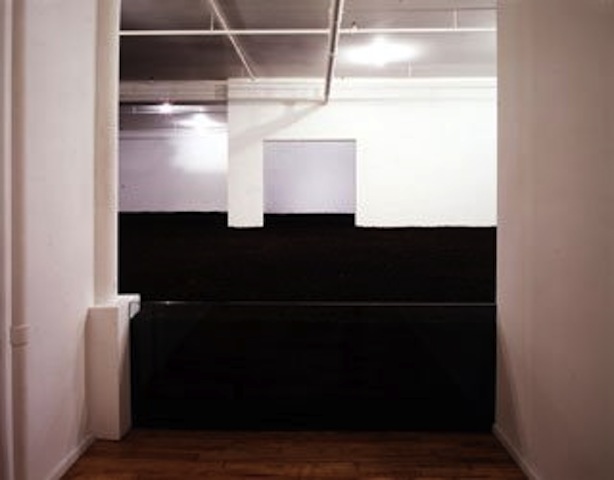 Sure, The New York Earth Room might elicit the reaction of, “That was weird”, but it’s also an experience the kids likely won’t forget any time soon, precisely for that reason. Yet another offbeat find secreted away in a tony New York neighborhood (this time, Soho) The New York Earth room is actually an art installation created for the Dia Art Foundation by Minimalist and Land artist Walter De Maria. It is, as the title implies, a room full of earth — AKA dirt. Lots of it. (The raw numbers: 280,000 pounds, covering 3,600 square feet, and measuring 22 inches high.) The good news is, visitors can’t actually touch the dirt, so you don’t need t worry about kids leaving covered in soil. Adding to the impressive nature of the piece is that it is located on the second floor of its Wooster Street home. Wild and wacky, the installation is a great way to show kids that art isn’t necessarily always painted and in a frame, and to pose the question of: what makes something “art” anyway? (Not sold on the idea? There’s no risk to check it out: it’s free.) 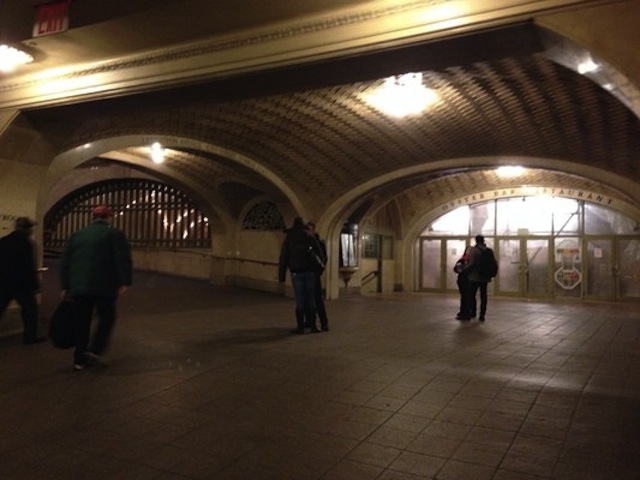 Don’t ask us to explain the exact physics of it all (parabolics?) we just know it’s cool. Located on the dining concourse level of Grand Central Terminal just outside the famed Oyster Bar & Restaurant, The Whispering Gallery is an architectural feature that would be right a home in a spy novel or romance story, enabling someone to hear a whisper from all the way across the bustling passageway. To experience the phenomenon in action, one person should stand facing one corner of the space, while another stands facing the opposite diagonal corner. When one person speaks in a normal tone, they can be heard by the other with no problem at all. (Of course, this makes The Whispering Gallery a popular place for marriage proposals, but you could also employ it to tell someone they’re going to Disneyland or getting that new scooter they’ve been eyeing.) In the spring, head to the Brooklyn Botanic Garden to try out the Osborne Garden “Whispering Benches” which, thanks to similar properties, also support covert conversations. 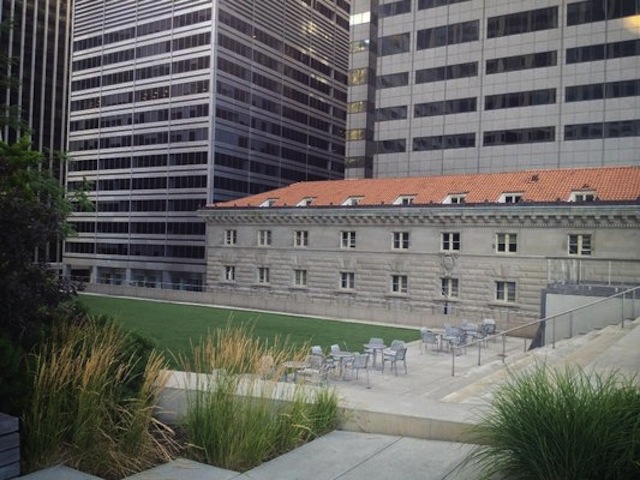 Next time you and the family are tooling around the Financial District and feeling overwhelmed by the urban jungle, head to 55 Water Street. Hop on the escalators for a quick ride and emerge in a hidden oasis of greenery and calm among the skyscrapers. The Elevated Acre is a popular spot for the area’s office workers looking for a peaceful spot to lunch, but it’s also a place for picnics, lawn games, and general maxing and relaxing. The cushy AstroTurf ensures the “lawn” is a verdant green at all times, and plantings of hydrangea and annual flowers add color. The out of the way gem also provides great views of the East River, Brooklyn Bridge and more. Yet another reason to visit this urban park?: You’ll find electrical outlets under some of the benches, so if your phone needs a charge, you can plug in and chill out here. 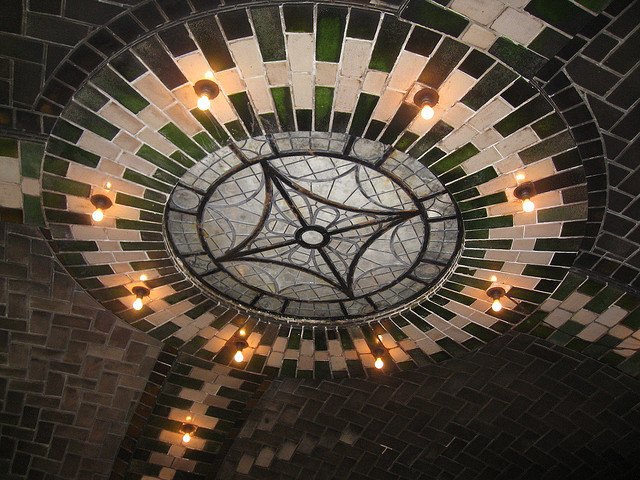 All it takes is a swipe of a Metrocard to go back in time and see some of the glory of old New York. Originally the starting point of the city’s first subway line, the City Hall station, built in 1904, is considered one of the finest ever created in the system. Its features include stained glass skylights, brass lamps, arches of  colored Guastavino tiles and an elegant curving tunnel, the last of which is responsible for the stop’s closure — it couldn’t accommodate the new, longer trains introduced in 1945. To see the abandoned station, hop on the southbound 6 train and stay on it at the Brooklyn Bridge stop, the “end of the line.” The train will then make a turnaround to head back uptown, and that’s when you can catch a glimpse of the past. If you want to actually walk the platform, the Transit Museum offers tours for members. 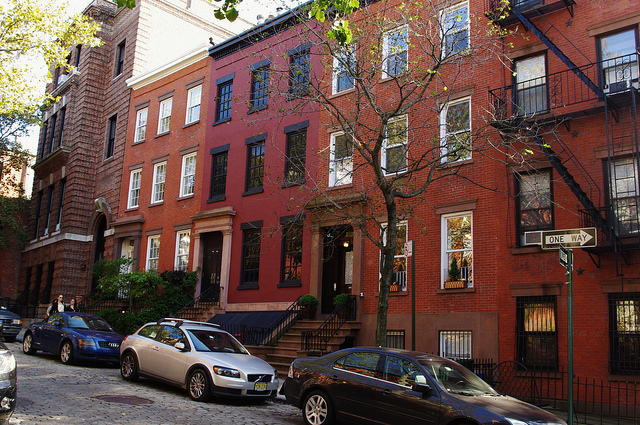 Do we think this merits a trip on its own? Probably not. But it’s a worthy diversion on a day that includes a trip to Brooklyn Bridge Park or the Brooklyn Heights Promenade. Yet another “hidden” structure from those sneaky folks at the MTA, this nondescript Greek revival townhouse does its best to deflect attention. But the building has a few “tells”, the most noticeable (and suspicious) is that its facade contains no windows — just glass backed by ominous, black rectangles. (The door’s keyhole is not the standard domestic hardware, either.) Surprise: it’s not a house at all, but a disguised subway evacuation tunnel and ventilator.

Do you have a favorite secret spot in NYC? Share it with us in the comments below!