Span-Tastic! Your Guide To Walking the City’s Magnificent Bridges

Walking across the Brooklyn Bridge is a must-do on many a bucket list, for New Yorkers and tourists alike. It is an awe-inspiring journey, but not the only one in town — NYC is home to five other major bridges that connect Manhattan to the world beyond. You can traverse them on foot, by bike, with strollers and scooters, and each trip is an adventure, with excellent neighborhoods to explore on both ends of each bridge. (Plus, as temperatures drop, these marvels of engineering provide stellar views of fall foliage.) Read on for our guide to crossing these bridges, and what to do on either side. 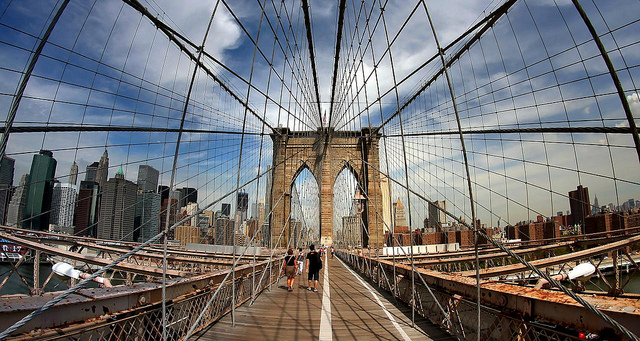 Brooklyn Bridge
If you haven’t already done it, the Brooklyn Bridge is the span to start with. Its wide, central promenade was made precisely for walking, scooting and biking. Opened in 1883, the bridge’s great history as an engineering marvel and the world’s longest suspension bridge (until 1903) is surrounded by a series of outdoor displays that effectively turn the site into an outdoor museum. (At its inception, the majestic span linked the separate cities of Brooklyn and Manhattan.) Heading east on the mile-plus walk, you take in the marvelous color of the ever-expanding Brooklyn Bridge Park, and on the western shores, you have the similarly foliage-lined East River Waterfront Esplanade. Directly south you can see Liberty Island with its own ring of trees putting on a fall display.

For More Fun: Explore Brooklyn Bridge Park, which has numerous terrific playgrounds and several great options for eating. The glass-enclosed Jane’s Carousel is a must-spin, and for bigger kids, the roller rink on Pier 2 is a fun option. On the Manhattan side, follow Broadway past City Hall and other monolithic government buildings on down to Battery Park and watch the boats go by and hop NYC’s newest merry-go-round filled with fish! 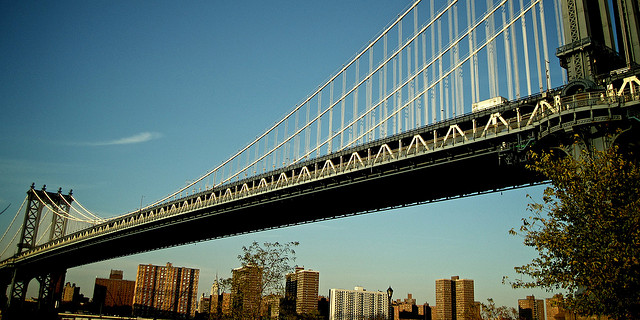 Manhattan Bridge
Continuing north up the East River, the Manhattan Bridge lives up to the goal its architects put forth some 105 years ago: adding monumental grandeur to New York under the City Beautiful movement. Designed by Carrère & Hastings of New York Public Library fame, the onramp to this almost delicate-looking span—the last of the East River crossings to open—is an arch and colonnade that invokes ancient Rome. The bike and pedestrian passageways were added to the mile-long stretch in 2001. Perhaps because the Brooklyn Bridge is so popular with pedestrians, cyclists are increasingly using the Manhattan Bridge to get where they need to go—fast. For this reason, it’s critical to follow the rules and walk or scooter on the southern passageway and ride bikes on the northern.

For More Fun: When in Brooklyn, explore the cobbled streets, great galleries, cute shops and excellent cuisine of DUMBO. Stop by the brand new Environmental Education Center at the very north tip of Brooklyn Bridge Park, which houses interactive exhibits for kids or drop in for some play date at the new Recess Dumbo.  On the Manhattan side, peruse the most exotic fruit, vegetable, and dried marine life stalls of Canal, Grand, and Allen streets, and plan to drop into any of the restaurants that abound for an authentic Chinese meal. If it’s not too cold, check out the latest in made-to-order ice cream on Mott Street. 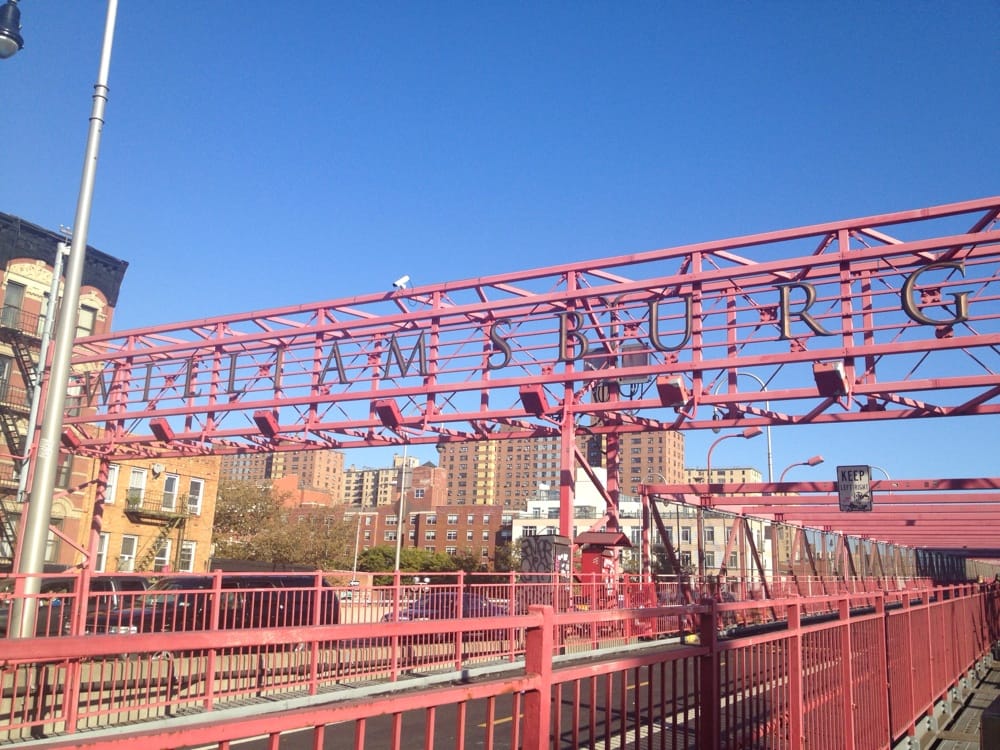 Williamsburg Bridge
To the degree that charm and grit can coexist, the Williamsburg Bridge has it. As the name suggests, it connects South Williamsburg and the Lower East Side of Manhattan and like with its sister, the Manhattan Bridge to the south, it’s important to make this crossing on the correct passageway. In Manhattan, the split between the pedestrian and bicycle ways is clearly marked at the entrance at Clinton and Delancy Streets. However in Brooklyn, people on foot should enter at Berry Street between South Fifth and Sixth streets; those on bikes hop on the route at Roebling and South Fourth. Not to be outdone, the Williamsburg Bridge also had its limelight in world record books: When opened in 1903, it was the largest suspension bridge. The views on either banks of the East River are more urban jungle than foliage, but who can argue with a head-on view of the Empire State Building to the west and the iconic Domino Sugar building to the east? And looking north, Roosevelt Island with its nature-covered southern tip, is coming into view.

For More Fun: On the Williamsburg side, visit the North Brooklyn Farms located in the shadow of the former Domino Sugar factory; the working (and inspiring!) farm is the latest welcome addition to the emerald necklace that began with the Brooklyn Bridge Park. In Manhattan, hit a playground along East River Park or head further inland to the legendary Katz’s Delicatessen. 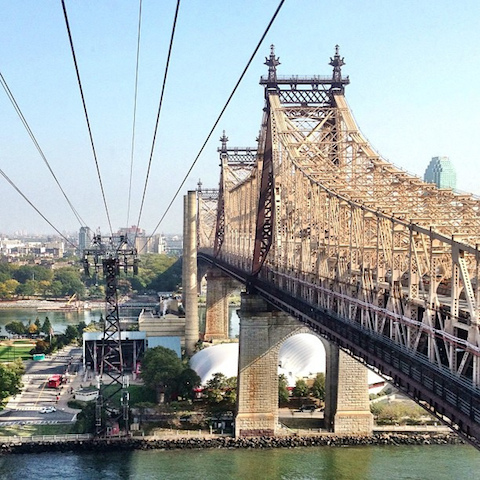 Edward Koch Queensboro Bridge
The Queensboro Bridge—dedicated to Mayor Ed Koch in 2010—has two points of distinction among the East River crossings: at about 1.7 miles, it is the longest span, and it is the only non-suspension bridge. This bridge is supported by two elegant cantilevers that are stunning to see up close and personal, and on its centennial birthday in 2009, the Queensboro Bridge was designated a National Historic Civil Engineering Landmark. Also known as the 59th Street Bridge, you actually enter the bike and pedestrian artery at 60th Street and First Avenue, which runs along the north side of the span, connecting to Long Island City on the Queens side. The Manhattan and Williamsburg bridges both carry cars and subways, but Queensboro has the added thrill or running parallel to the Roosevelt Island Aerial Tramway (a fun ride for the swipe of a Metrocard!) for half the trip. As you near Queens, the Q, N, and 7 trains come up from below ground, which is also exciting to see.

For More Fun: Long Island City is being thoughtfully developed to include landscaped pathways leading to and around the river’s edge. The area surrounding the bridge’s onramp in Queens is home to a growing number of restaurants and shops. Two museums in this hood include the MoMa edgy outpost P.S. 1 and the Museum of the Moving Image, where a Jim Henson exhibit will open this winter. On the Manhattan side, head east to enter Central Park at Fifth Avenue or visit the (free) Sony Wonder Technology Lab on Madison Avenue between 56th and 55th streets. 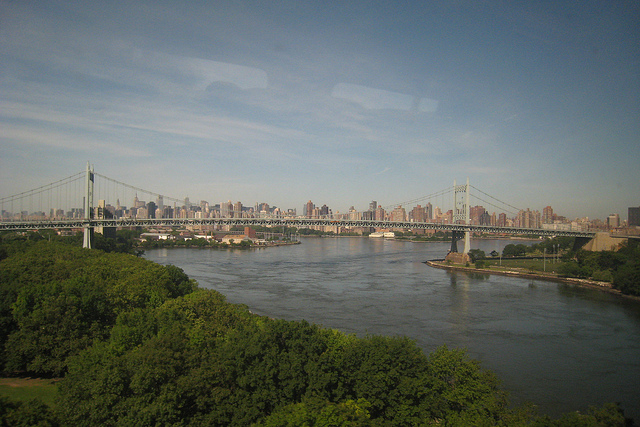 Robert F. Kennedy Triboro Bridge
The full walk across the Triboro Bridge, as the RFK Bridge is colloquially known, actually takes you across two spans: one that connects from 127th Street and Second Avenue in Harlem to Wards and Randall’s Island (the massive row of toll booths is where you begin the descent), and then from Wards and Randall’s to 127th Street and Hoyt Avenue in Astoria, Queens. On Wards and Randall’s, the ramps between the two links of the bridge are about a quarter of a mile apart—taking you through a parking lot, past a stadium, along a golf course—giving you a one-of-a-kind view of this massive structure from below. While bikes are permitted on the bridge, there are a few sets of stairs to navigate through all of this which may be difficult with younger children. In addition to the enlightening walk through Wards and Randall’s, the Triboro Bridge offers up the most unusual views of Manhattan itself. To the north, you see the island’s escarpments and to the south, from this perspective, the familiar building tops appear to be jumbled together in the wrong order.

For More Fun: Hike the historic 125th Street—also known as Martin Luther King Boulevard—in Manhattan. The streetscape is rapidly evolving to include excellent restaurants such as Red Rooster and numerous big-name retailers (not to mention the Apollo Theater). Additionally, The Demolition Depot on 125th Street at Third Avenue is a fun place to spend an hour looking at antiques and other curiosities. In Queens, head to the Bohemian Hall and Beer Garden on 24th Avenue at 29th Street. Bring jacket, find a picnic table in the beer garden out back, and enjoy a barbecue lunch and pitcher of whatever’s on tap. 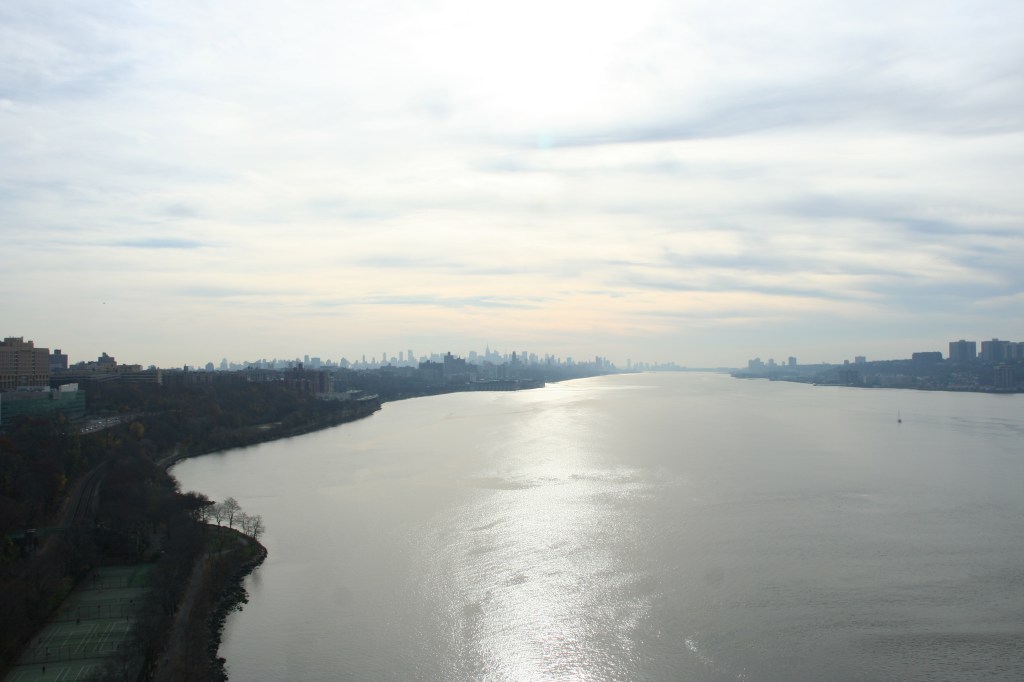 George Washington Bridge
With five bridges crossing over the East River, it is no wonder that the sole span over the Hudson River—the George Washington Bridge—is billed as one of the busiest on the planet. Opened in 1931, it is a relative newcomer to New York City’s bridge scene, with the lower level opening in 1962. On designated holidays this 1.5-mile bridge is home to the world’s largest free-flowing flag, and this bridge is increasingly a draw for both pedestrians and cyclists looking to enjoy its vantage point. From mid-span looking north, the GWB offers stunning foliage views of the Palisades Interstate Park on the Jersey side and Fort Tryon Park in northern Manhattan. Looking south, you have the increasingly landscaped Fort Washington Park to your left, and the tree-fringed shoreline of New Jersey on your right; the majestic Hudson River sparkles in between. Access the GWB from Manhattan, following 178th Street to Cabrini Boulevard and up the narrow, winding pathway.

For More Fun: Pack a picnic and visit the legendary Little Red Lighthouse, located at the awesome base of the bridge. Or explore the rapidly evolving Washington Heights neighborhood, where Moscow on the Hudson offers up an excellent selection of kielbasa, caviar, Russian salads, yogurts, cheeses, and chocolates. Bring a Russian-English dictionary if you have one! 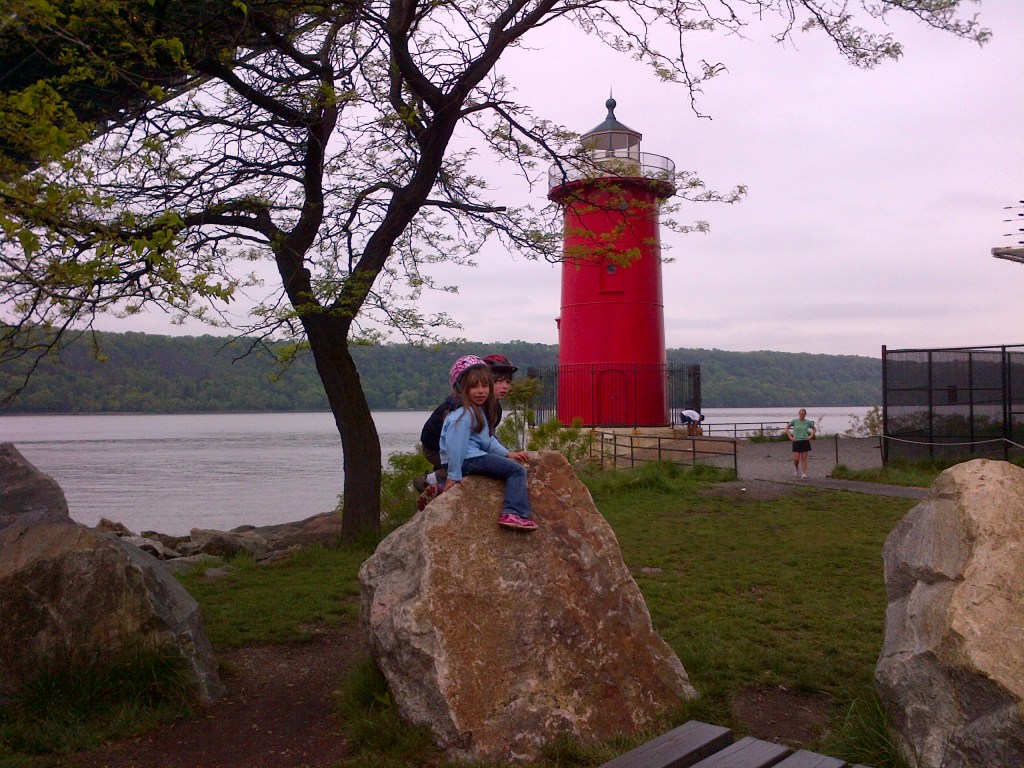 Let us know about your bridge treks and the neighborhoods you explore on either side!

Red Tricycle > Things to Do > Outdoor Fun > Span-Tastic! Your Guide To Walking the City’s Magnificent Bridges